Stand with the students 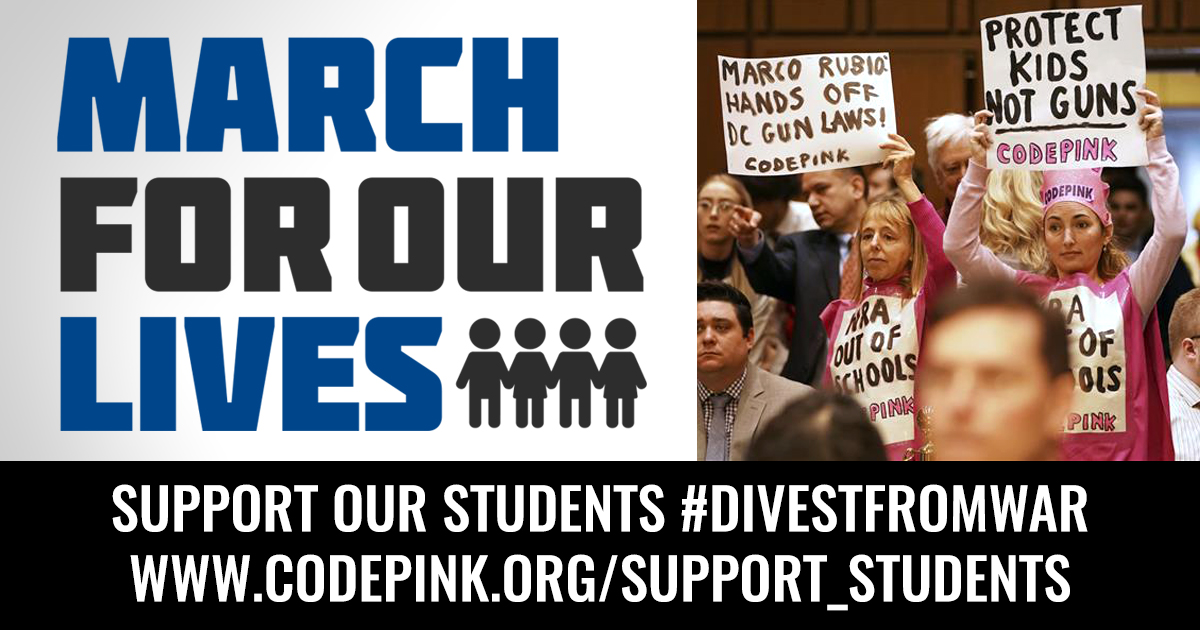 Just as we were writing this note, we learned of yet another school shooting at Great Mills High School in Maryland. The devastating violence in our schools and communities — Parkland, Sandy Hook, Las Vegas, Sutherland Springs, Virginia Tech, and now Great Mills — needs to end. Way too many innocent, hopeful lives have been lost; way too many beautiful hearts have been stilled by gunfire. The time for action is now.

CODEPINK is proud to be marching in solidarity with scores of brave and passionate students this weekend.  Students are courageously standing up to Washington and telling them to get their priorities straight; we agree wholeheartedly.  Show your support for these principled young people by contacting your representatives in Congress. Tell them to refuse campaign contributions from weapons manufacturers and the NRA.

CODEPINK has long called for our country to divest itself from war; now we are taking to the streets to stand in solidarity with those who know human life should have priority over weapons.  Merchants of death — the NRA and weapons manufacturers — have no place in our schools, in our communities or in our congressional representation. Tell Congress to commit to refusing all campaign contributions from the NRA and weapons manufacturers.

Tell Washington to get their priorities straight!  Let’s follow the lead of these brave students and hold our lawmakers accountable for taking campaign contributions from the NRA and weapons companies. They need to #DivestFromWar at home and abroad.

We’re marching on Saturday to say no to the NRA, no to violence, no to war — and YES to life, liberty, and local peace economies. Find a march in your community, and here are some flyers and graphics you can use. Don't forget to post this message on Facebook and Twitter!

P.S. Travel with Jodie and Medea on the CODEPINK tour of Barcelona this May. See how activists, social movements, and progressive political forces are building one of the world’s most innovative local peace economies. Sign up now!