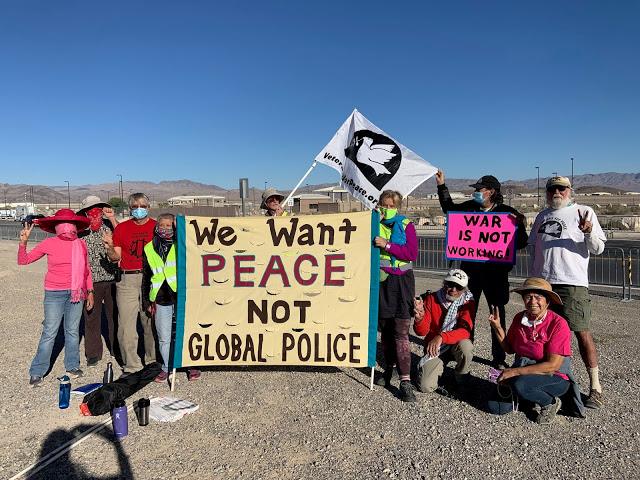 April 3, 2021 – LAS VEGAS/CREECH AFB, NV – Anti-war/anti-drone demonstrators from the East and West coasts announced they are converging here April 4-10 to hold daily protests – which may lead to arrests – at the U.S. Drone Base at Creech Air Force Base in Nevada.

At Creech,  U.S. Air Force personnel, coordinating with C.I.A. officials, are, regularly and secretly, killing people remotely using unmanned armed drone planes, primarily the MQ-9 Reaper drones.  Thousands of civilians have been killed and injured, in Afghanistan, Pakistan, Iraq, Yemen, Somalia, Libya, and elsewhere, since 2001, according to the activists.

In the aftermath of the recent and tragic U.S. massacres by lone gunmen in Georgia and Boulder, activists will hold daily two hour vigils between 6:30-8:30 a.m. and 3:30-5:30 p.m., during commute hours to underline the connection between mass violence at home and the “normalized" mass violence of the U.S. covert drone program and U.S. military.  Following the recent mass shootings in the U.S., Vice President Kamala Harris said “Everyone has the right to go to work, to go to school, to walk down the street and be safe…..a harm against anyone of us is a harm to all of us."

Over the last 20 years, U.S. armed drones have been used to commit horrible atrocities that have included strikes on weddings, funerals, schools, mosques, homes, farm laborers, and in January, 2020, included direct hits on high level foreign military and government officials from Iran and Iraq.  “Participants in this week's nonviolent protest at Creech A.F.B. believe that people around the world have the right to go to school, attend weddings and funerals, drive a car or walk down the street and be safe.  U.S. foreign policy that rationalizes the right to sacrifice the lives of civilians by remote controlled killling is unconscionable and inherently racist,” says Toby Blome, one of the organizers.

These drone massacres have, at times, resulted in the deaths of dozens of civilians with a single drone attack. No U.S. official has ever been held accountable for these ongoing atrocities, yet, an important drone whistleblower, Daniel Hale, who leaked truths about these atrocities faces potentially harsh sentencing later this July.

The protest includes daily vigils during commute hours, with different themes each time.  Two notable ones include:

As a U.S. citizen and USAF analyst, Daniel acted out of conscience to reveal the truth about these serious war crimes that he felt the public had a right to know.  Protesters will stand in support of Daniel’s courageous act and demand that the real criminals be prosecuted, including the commanders of killer drone bases like Creech AFB, not the whistleblowers, who reveal the atrocities. Some of the messages will include:  "Free Daniel Hale, Exposing war crimes is not a crime" "Prosecute the War Criminals not the Truth-tellers"

Tues, April 6, 6:30 - 8:30 a.m. THE DRONE MASSACRE MEMORIAL:  Activists, will display a long series of banners, stretched along the highway, each highlighting details of past U.S. drone massacres, including statistics on civilian deaths.

“It is our hope," said Toby Blomé, one of the organizers, “that the military personnel that drive into the base everyday will reflect deeply about their role in this criminal activity that causes innumerable deaths and untold suffering around the globe, and that just maybe some of them will make the difficult but ethical choice to not participate.

“Militarized drones are expanding at an unbelievable rate, replacing conventional warfare, without any meaningful public debate.  It is therefore the obligation of the military personnel to embrace their own individual responsibilities.”