CODEPINK is leading the nonviolent resistance to the rich man's coup of America. Join us by commenting on this post, adding comments to the articles linked below, and sharing the call for a feminist response to rich man's folly on Facebook and Twitter.

The "compromise" approved by the House today and expected to pass the Senate tomorrow is an atrocity. It is a rich man's coup of our democracy. Consider this: absolutely no tax increases are included in the bill. It creates a "super Congress," with authority to slash social services when the country is still reeling from the recession. As Robert Reich noted, the President paid a ransom when there was absolutely no reason to link the increase of the debt ceiling with cutting the budget deficit. 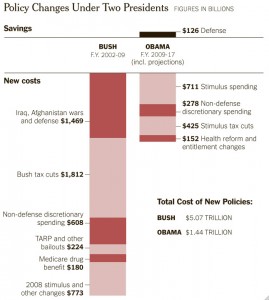 Last week, the NY Times published, and The Atlantic promoted, a revealing graphic, reminding us how this deficit was created: with tax breaks to the rich and unfunded and unnecessary wars. Remember this when the mainstream media focuses in on the particulars of what is happening this week. Beltway leadership will not admit that it was spending decisions made during the Bush administration that led to this point.

Who will be affected the most by the budget cuts? Women, of course. Susan Feiner delineates the ways the plan balances the budget on the backs of women in the Ms. blog. If cuts in Social Security and unemployment insurance don't piss you off, maybe the idea of cutting safety inspections will. Between those cuts and the perennial lack of funding for infrastructure modernization, you can expect more poop in your water in the coming years.

As Rep. Emanuel Cleaver (D-MO), the chairman of the Congressional Black Caucus noted, the debt deal is a 'sugar-coated Satan sandwich.' Rep. Raúl M. Grijalva, co-chair of the Congressional Progressive Caucus, denounced the deal as a give-away to the rich and corporations on the backs of working people and warned that both parties stand at a crossroads. The House of Representatives has already sold the American people down the river, will the Senate do the same?

Fairness & Accuracy in Reporting (FAIR) pointed out today that the media committed malpractice in covering the debt ceiling debate. The 'center' has been defined far away from public sentiment and few people acknowledge the cause of the deficit or the fact that the debt ceiling can be raised without cutting vital social programs.

How did we get to this point? The National Organization for Women (NOW) thinks the lack of female leadership in the negotiations was one reason real human needs weren't taken into account. Many men are calling for the people to march on Washington, from Keith Olbermann to Rep. John Conyers (MI-D)

Join the feminist response to the rich man's coup. Join CODEPINK in DC as we call on Congress and the President to Bring Our War $$ Home, tax the rich, and create jobs through increased federal spending. Can't make it to the nation's capital? Develop a cultural response to ten years and counting of war and corporate welfare through Create, Not Hate. We are the nonviolent resistance needed to overturn this shameful usurpation of democracy. Join the PINK Team today.