Reserve Your Space For Truth! 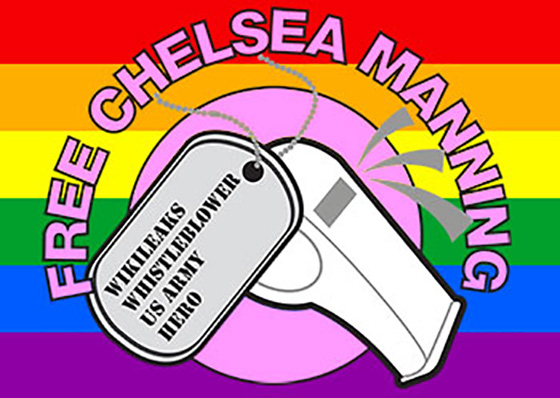 CODEPINK will join the Chelsea Manning contingent in the San Francisco Pride Parade, the largest LGBTQ gathering in the nation. The Parade kicks off at 10:30am on Sunday, June 26, 2016 at Market & Beale and ends at Market & 8th, near the Civic Center. This year’s SF Pride Celebration theme is FOR RACIAL AND ECONOMIC JUSTICE.

The exact meeting location of the Chelsea Manning Contingent will be assigned in mid-June and communicated out to participants.

We encourage CODEPINK participants to help with preparation of the contingent. Activists will be needed to hold banners and signs on the day of the parade. Others will be needed to collect visuals after the march. If you are interested in helping out, please indicate that on the volunteer sign up form.

* Hand out Chelsea Manning stickers to the crowd!

* Cheer on our Flash Mob Dancers!

March for our heroic WikiLeaks whistle-blower Chelsea Manning and show your support for Chelsea, whistleblowers, and government transparency. In 2013, the contingent was awarded the parade's highest honor, “The Absolutely Fabulous Overall Contingent”. The contingent was the largest non-corporate group with well over 1,000 people! In 2014, Chelsea Manning was even honored as an official Parade Grand Marshal!

In truth and resistance!
Nancy and CODEPINK-SF