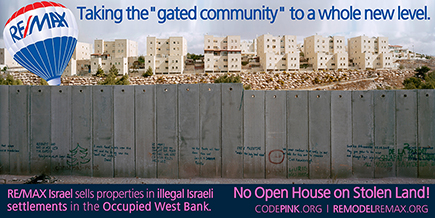 RE/MAX Israel real estate brokers and agents do business in all the major West Bank settlements, including those in Occupied East Jerusalem, in violation of international law. The Fourth Geneva Convention states that an occupying power may not move its civilian population onto the territory it is occupying. RE/MAX’s profiteering and complicity have drawn condemnation from human rights activists around the world. A recent report by Human Rights Watch entitled “Occupation, Inc.: How Settlement Businesses Contribute to Israel’s Violations of Palestinian Rights," directly indicts RE/MAX LLC:

CODEPINK’s Remodel RE/MAX campaign calls on RE/MAX to set explicit guidelines for RE/MAX brokers and agents making clear that they may not sell, rent, or advertise properties in Israeli settlements in the Occupied Palestinian Territories, including East Jerusalem. Additionally, the campaign asks RE/MAX to mandate that members of the RE/MAX network should not refer clients to agents and brokers who are involved in such activities.

Thousands of supporters of the Remodel RE/MAX campaign sent letters to RE/MAX LLC CEO, Dave Liniger, calling on him to take action against  franchisee RE/MAX Israel’s involvement in sales of illegal settlement homes. Now we will gather outside their annual shareholders' meeting to demand that RE/MAX  stop profiting from violations of international law.

Please contact CODEPINK organizer Ariel Gold at [email protected] if you have any questions.

Toward peace and justice,