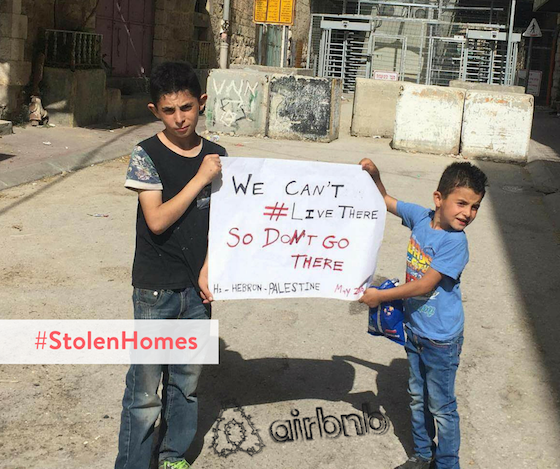 This week the #StolenHomes Campaign released a video featuring Palestinians sending a message to Airbnb about their practice of listing rentals in illegal Israeli settlements: “We Can’t #LiveThere, So Don’t Go There.” Watch and share the video now!

Since January, the Stolen Homes campaign, which CODEPINK is a part of, has been demanding Airbnb comply with international law and end its occupation profiteering, a call Airbnb has ignored despite being presented with a petition signed by more than 150,000 people.

With Israel’s brutal military occupation now entering its 50th year, it is time to escalate our campaign and we need your help to do this! We are calling for a Day of Action on Friday, June 3 targeting Airbnb investors to urge them to use their unique position to influence Airbnb.

Last month, the UN announced that it will establish a database of all companies implicated in Israel’s illegal settlement enterprise. Unless Airbnb terminates their involvement now, it will be included in the database. The first draft of the database will be soon be released so now is the best time to expose Airbnb for profiting off stolen land!

Toward an end to occupation profiteering!
Alli, Ariel, Nancy K., and the entire CODEPINK team