Pride in our whistleblower! 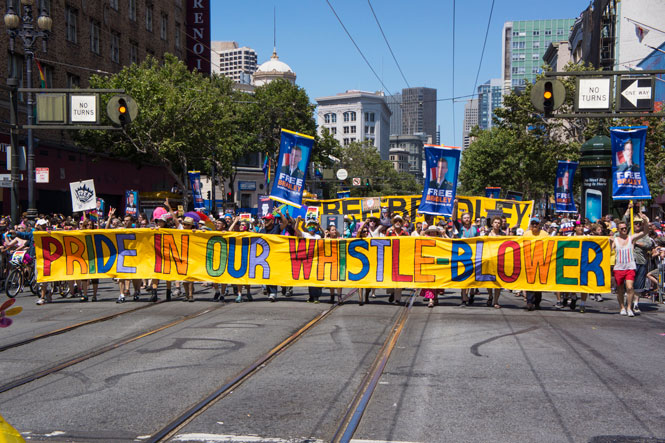 We will join the Chelsea Manning contingent in the San Francisco Pride Parade, the largest LGBTQ gathering in the nation, on Sunday, June 26, 2016. Our meeting place is between Howard and Folsom on Spear St. at 11:30am. Contingent and wheel monitors, who have completed the online training, please arrive at that location at 11:15am for a quick check in. RSVP to let us know you'll be there!

March for our heroic WikiLeaks whistle-blower Chelsea Manning and show your support for Chelsea, whistleblowers, and government transparency. In 2013, we were awarded the parade’s highest honor, “The Absolutely Fabulous Overall Contingent”. Our contingent was the largest non-corporate group with well over 1,000 people! In 2014, Chelsea Manning was even honored as an official Parade Grand Marshal!

This year, with Chelsea Manning’s legal appeals now underway, she’ll need our support more than ever! Let’s turn out and be absolutely fabulous again! RSVP now on our website!

This year’s SF Pride Celebration theme is FOR RACIAL AND ECONOMIC JUSTICE. Plan accordingly for traffic and weather!

In pride, justice and resistance,