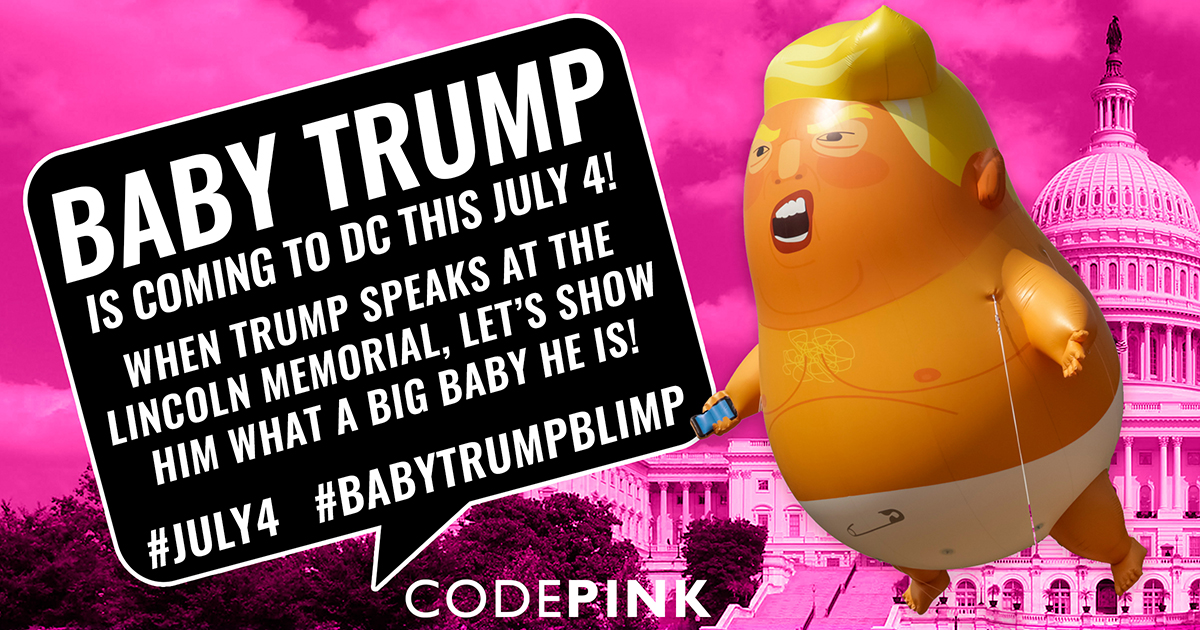 What: CODEPINK Festival on the National Mall Will Protest Trump’s 4th of July Address

Where: Northwest corner of the National Mall at 17th street, Washington DC

Washington, DC-This 4th of July, CODEPINK will host a festival on the National Mall from 2-6pm to protest the Trump administration’s politicization of our national holiday. The anti-war organization will be featuring the Trump Baby Blimp, made famous in the UK, and a 16-foot Trump Robot sitting on a golden toilet, as well as lots of small Baby Trump balloons. The festival will also include stand-up comedy, a dance party, and an open mic for participants to bring attention to issues that are important to them.

“The president is shifting the 4th of July festivities to celebrate his administration and to glorify war. We will bring together people opposed to the pain and suffering caused by this administration, from concentration camps at the border to supplying weapons used by Saudi Arabia to kill Yemeni children. We want to celebrate the power we have as Americans to work toward peace,” says Medea Benjamin, co-founder of CODEPINK.

Trump's America has been one of putting children in cages, banning refugees and immigrants, aligning with the murderous Saudi regime, supporting Israel's occupation of Palestinian land, instigating a war with Iran, orchestrating a coup in Venezuela, and spreading hate and racism across the U.S. and the world. CODEPINK and other activists refuse to stand by as the president uses a national holiday to promote policies of racism, hate, and violence at home and abroad.

Trump has publicly called for militaristic parades ever since attending the Bastille Day military rally in Paris in 2017, and he has turned the July 4th celebration into just that. Not only is he breaking with tradition by speaking (most presidents have stayed away to make it a nonpartisan day), but he is ordering up tanks and fighter jet flyovers throughout the day.

“It is very alarming to see Trump turn a traditionally non-partisan celebration into a Trump rally and a military spectacle,” says CODEPINK co-director Ariel Gold. “It’s absolutely shameful that money is being spent to divide this country even further, and to  legitimize the violence of war when so many Americans don’t have access to basic healthcare.”