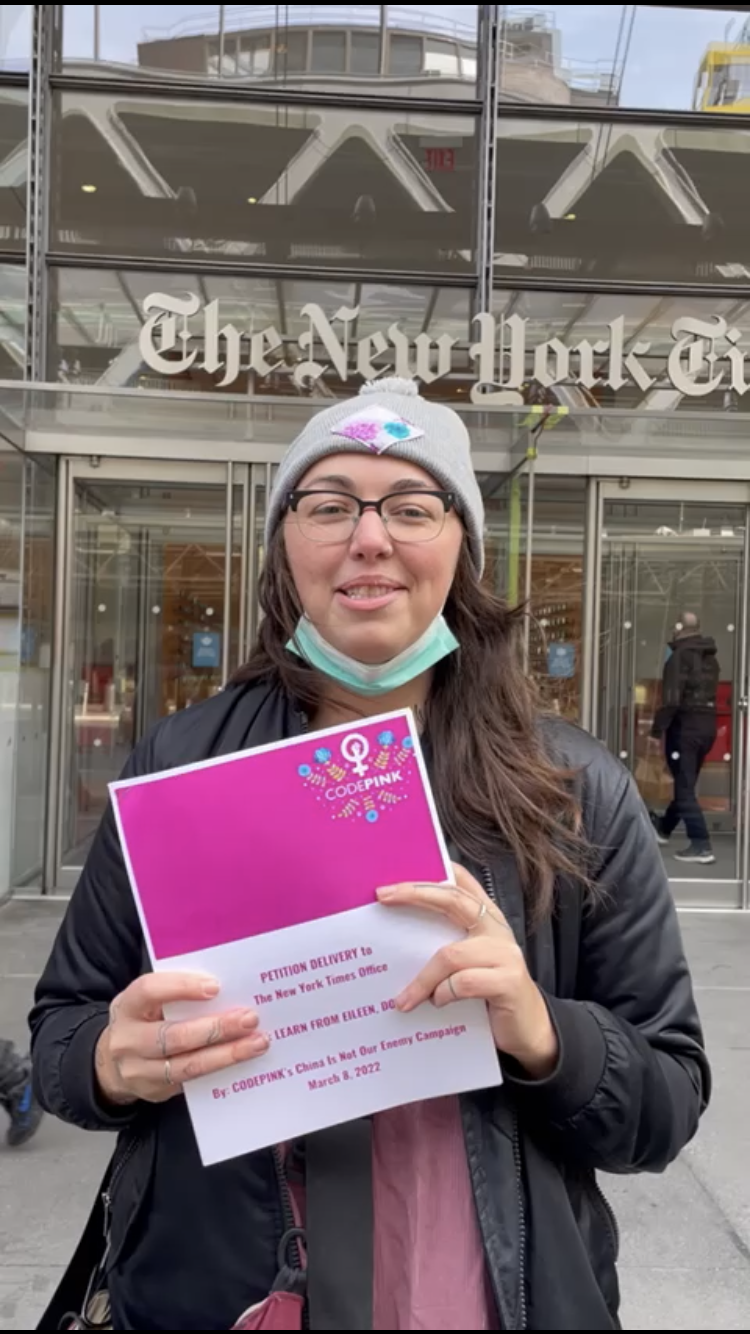 March 8th, 2022 — On International Women’s Day in New York City, CODEPINK and partners from The People's Forum NYC made the trip The New York Times Corporate Office with around 2500 signatures, urging their journalists to stop using Eileen Gu, an 18-year-old girl who chose to ski for China, to further drive Sinophobia and fuel aggression and war on China.

During their coverage of the 2022 Beijing Winter Olympics, the New York Times have made no secret about their angle on Eileen Gu with headlines such as “Why is U.S.-born Eileen Gu skiing for China?”, and “Eileen Gu Is Trying to Soar Over the Geopolitical Divide”.  These articles contain xenophobic assumptions such as “Her quest — pleasing the Chinese government and population while marketing herself within the United States and around the world — might be harder than anything she will perform on snow in Beijing.”

CODEPINK’s letter, with nearly 2,500 signatures, calls on The NYT to apologize to Eileen Gu and respect her right to choose, and asks the publication, which garners millions in readership, to report on China in a way that does not fuel Sinophobia and justify more aggression against China and people of Chinese descent.  You can read the full letter here.

CODEPINK’s Presleigh Hayashida, along with staff from The People's Forum NYC, were allowed to enter the NYT office building and were directed all around the lobby and eventually to the office's mail room, where they left the letter and list of signatures for collection.  CODEPINK was unfortunately not able to talk directly with anyone from The NYT.  Read our press release here.

The NYT’s mission is to “seek the truth and help people understand the world.”  Yet this coverage of Eileen Gu is happening as young Asian women in America are experiencing escalating violence, including the recent murders of Christina Yuna Lee and Michelle Alyssa Go.  #StopAsianHate has done little and will continue to do little to address the systemic issues of growing anti-Asian and anti-China sentiments–which directly correlate with the increasing violence against Asian elders and Asian women in the United States. The interpersonal manifestation of this violence is clearly linked to the demonization of China in the media and Congress, as well as the wars the U.S. has waged and continues to wage in Asia.  When the mainstream media constantly demonizes China, and Congress reinforces the idea that China is an “enemy” or “adversary” to the U.S. through introducing and passing legislation aimed at “countering,” “competing with” and “containing” China, anyone who can be perceived to be Chinese is put in danger.

Alli Lau is the coordinator for the China Is Not Our Enemy campaign at CODEPINK, a women-led grassroots organization dedicated to ending U.S. wars and militarism.