Nothing short of a miracle 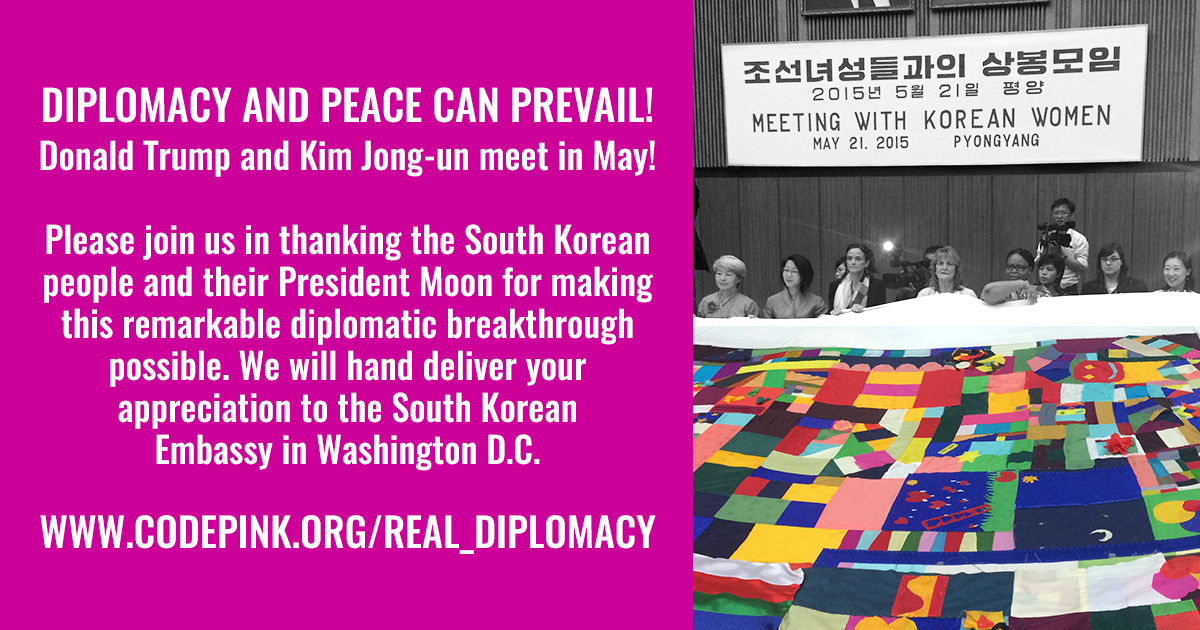 When the two of us joined Christine Ahn as part of Women Cross the DMZ, traveling from North to South Korea to meet with women and call for a peace treaty, we never imagined that just two years later our countries would be engaging in real diplomacy. The breath-taking events of these past few weeks reflect that deep yearning for peace we felt in the hearts of women on both sides of the Korean Peninsula.

Rather than credit this stunning opening to President Trump’s “fire and fury” threats and crippling sanctions, we credit the people of South Korea whose 2016-2017 candlelight uprising overthrew a corrupt government and elected Moon Jae-in, a candidate who promised to talk to North Korea. We credit President Moon for fulfilling his campaign promise and making this remarkable diplomatic breakthrough possible. Please join us in thanking South Korean President Moon and the South Korean people. We will hand deliver your appreciation to the South Korean Embassy in Washington DC.

Just look at what has transpired in the past month:

Please join us in thanking South Korean President Moon and the South Korean people for their great accomplishment to bring diplomatic talks between the US and North Korea.

North Korea’s invitation to talk with President Trump was accepted, and the talks are scheduled for May. But some Trump opponents and US elites with interests in endless conflict, including weapons manufacturers, don’t want the talks to succeed. And President Trump is so erratic that he could easily lose patience and put us back on a war footing. We need to be prepared to defend diplomacy. We must turn US policy from one of “maximum pressure” to “maximum engagement,” including an end to the crippling sanctions and the intimidating US-South Korean war games. And we must push that the talks end with a formal peace treaty to replace the supposedly temporary armistice that has been in place since the end of the Korean War in 1953, when 80 percent of North Korean cities were totally destroyed.

We should also use this moment to talk about the need to denuclearization not only of the Korean Peninsula, but of the entire world. Pushing North Korea to get rid of its few nuclear weapons while the United States and Russia maintain their enormous arsenals is not only hypocritical, but also violates the Nuclear Nonproliferation Treaty obligation that the nuclear states made nearly 70 years ago to make good faith efforts for nuclear disarmament.

Our dear sister Christine Ahn from Women Cross the DMZ has called the dramatic news of a May meeting between Donald Trump and Kim Jong-un “nothing short of a miracle.” But this miracle reflects years of work by Christine and thousands of women in the North and South, as well as in the global community, who have been engaged in beautiful gestures of solidarity. It reflects the desires of millions of South Koreans who voted for a president committed to improving relations with the North. And it reflects President Moon master class in diplomacy. Please take a moment to thank both the South Korean people and President Moon for pulling us back from the brink of war.

For a nuclear-free world,
Medea Benjamin and Jodie Evans

P.S. Travel with CODEPINK to Barcelona this May. See how activists, social movements, and progressive political forces are building one of the world’s most innovative local peace economies. Sign up now!