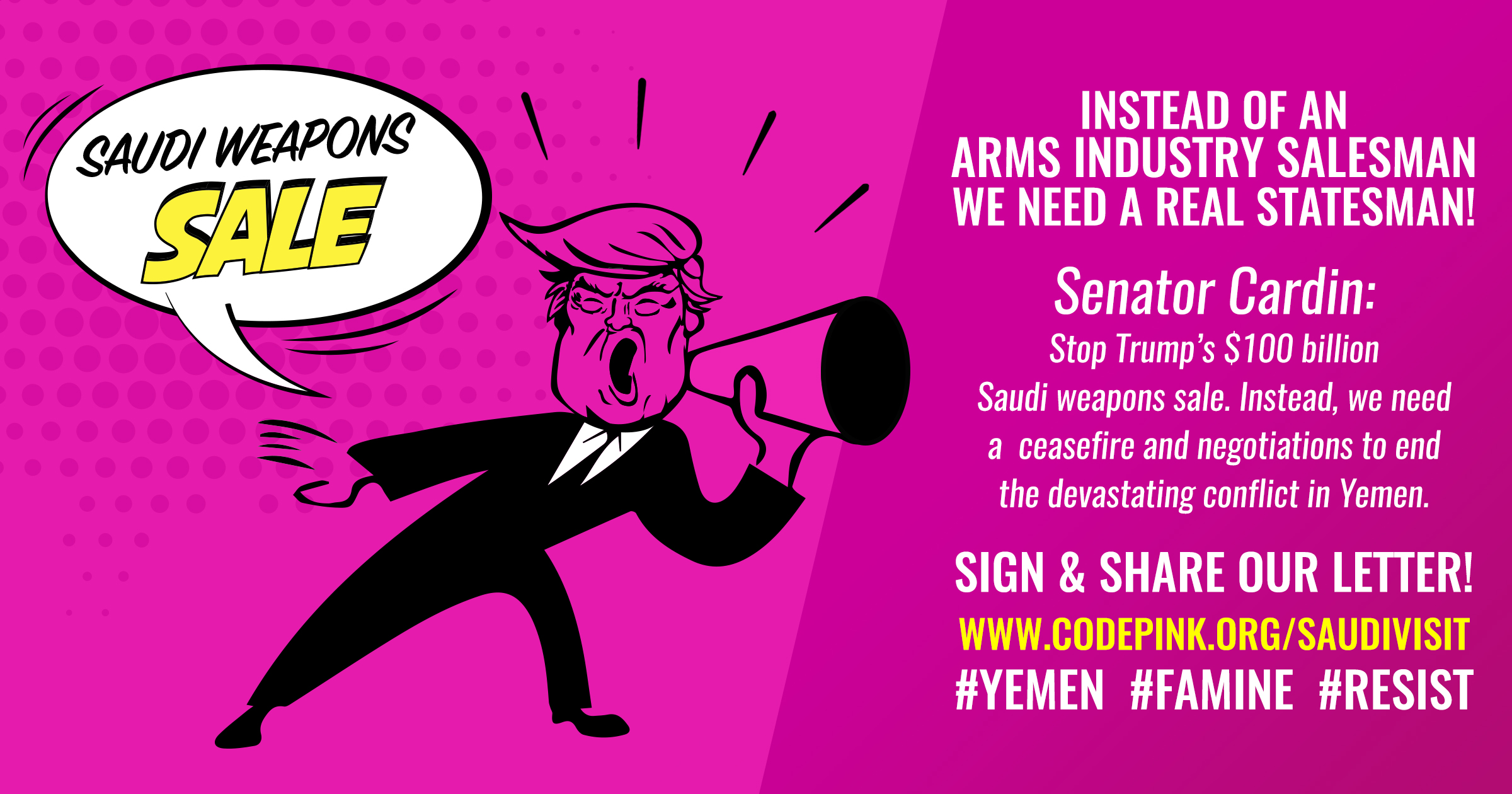 President Trump is on his way to Saudi Arabia on Friday, anxious to clinch a massive new $100 billion arms deal. But for over two years, these weapons have been used to devastate neighboring Yemen. Instead of a salesman for the arms industry, we need a statesman to restore America's budget spending priorities!

Ranking member of the Senate Foreign Relations Committee, Senator Cardin, is key to stopping the arms deal. Email Senator Cardin and tell him to stop Trump’s $100 billion Saudi weapons sale! Instead of more weapons sales, we need a ceasefire and negotiations to end the devastating conflict in Yemen.

The war in Yemen has as resulted in an epic tragedy of destruction and starvation. Jan Egeland, head of the Norwegian Refugee Council and one of the few foreigners to visit Yemen recently, called it “a colossal failure of international diplomacy” and said the crisis is now “of biblical proportions.” He pleaded with the U.S. government to get a real peace process going.

Twenty people are dying every day, many of curable diseases because only 45 percent of the health facilities are functioning. And now there is an outbreak of cholera so severe that 187 people have already died in the past four days. Yemen is in a state of emergency!

Ignoring the suffering, Trump seems ready to escalate the war by supporting an attack on the key port of Hodeidah, something President Obama refused to do. Yemen imports 90 percent of its food, most of it through that port. An attack on the Hodeidah port could tip the country into a full-blown famine. Read Medea Benjamin's latest article on this topic to learn more: 10 Reasons Trump Should Not Strengthen U.S.-Saudi Ties.

The only way to end the humanitarian crisis is to end the conflict. Send an email to Senator Cardin: Stop Trump’s $100 billion sale of weapons to Saudi Arabia! Instead of more weapons sales, we need a ceasefire and negotiations to end the devastating conflict in Yemen. Don't forget to share the image above on Facebook and Twitter.

Amnesty International told Trump that new weapons sales could “implicate your administration in war crimes.” This is not the time to escalate the war and reap greater profits for weapons makers. It’s a time to turn swords into ploughshares.