We thank the 25+ CODEPINKers and allies who participated in last Sunday's Mother’s Day Rally and walk on the Golden Gate Bridge, including 4 young grandchildren! We thank the passersby who stopped and took note of our call to END ENDLESS WAR abroad and at home.

This year’s multigenerational gathering marked our return to the Golden Gate Bridge as Covid-19 winds down. We held colorful anti-war/peace & justice banners while enthusiastically chanting for an end to endless war and demanding that the real war criminals, not whistleblowers be prosecuted. A highlight was the annual reading of Julia Ward Howe’s (1870) “Mother’s Day Proclamation” calling on all to “Disarm, Disarm! The Sword of Murder is not the Scale of Justice”.  After the plaza rally, a smaller group took a colorful flowered peace sign and a large pink "peace flag" and walked the bridge, handing out this modern-day version of the Mother’s Day Proclamation to bridge visitors.  KRON, Ch. 4 used our photos and video, and aired a short evening report about our protest that, surprisingly, included most of the demands we listed in our press release (see below).  Overall, it was a great success and a beautiful day!

Please come next year, May 2022, for our Mother's Day Peace and Justice celebration on the Golden Gate Bridge 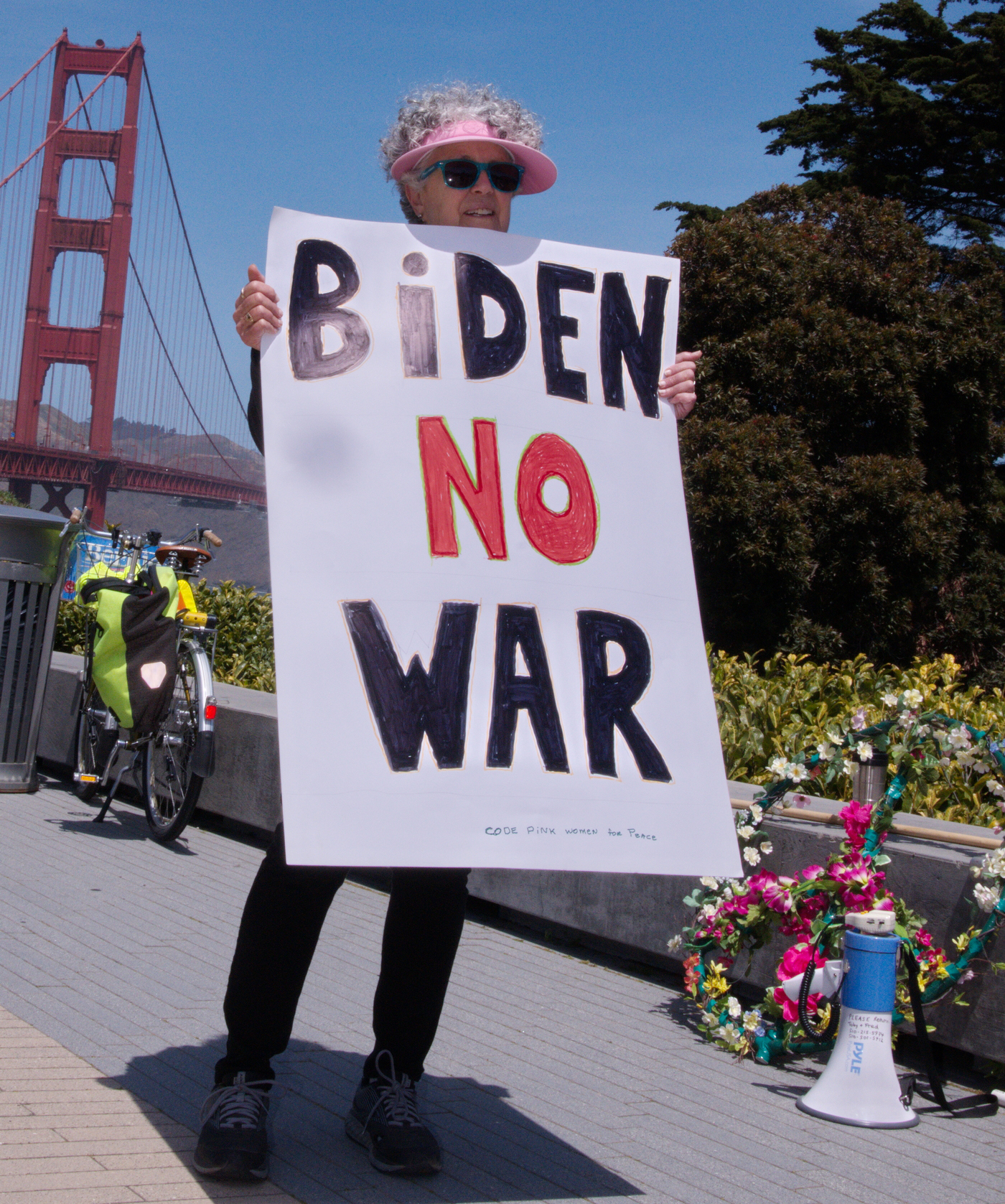 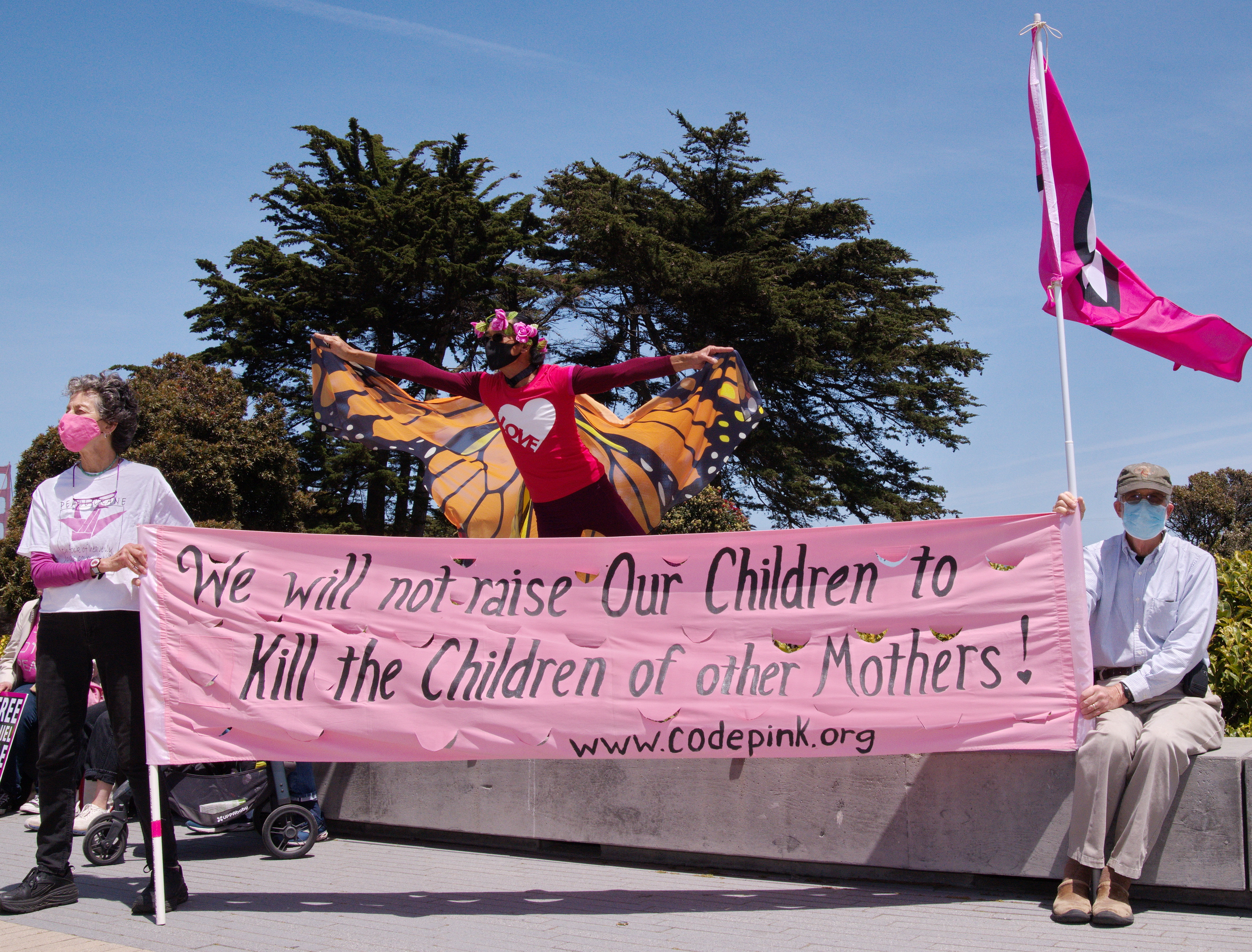 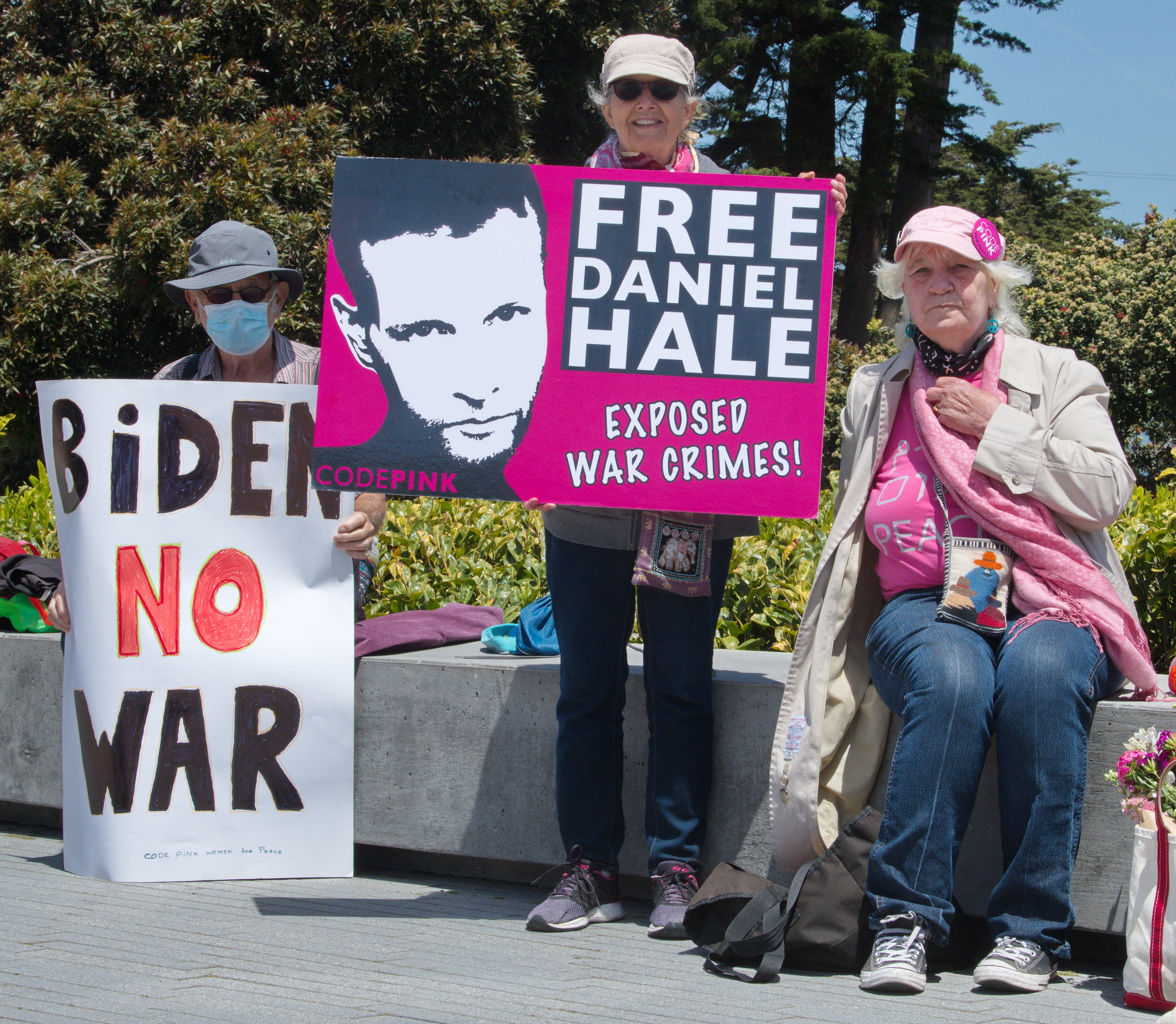 - President Biden END ENDLESS WARS:  Stop drumming up support for War with China, Russia, and Iran; Withdraw not just troops but all special forces, advisors, and military contractors from Afghanistan; And end killer drone strikes in Afghanistan and elsewhere around the world. - President Biden prosecute the real war criminals responsible for U.S. drone massacres that have murdered thousands of civilians.  (To this day not a single person has been prosecuted for the innumerable drone attacks on weddings, funerals, schools, mosques, and other group gatherings, resulting in high civilian deaths).

Additionally, we CODEPINK activists call for a complete overhaul of U.S. foreign policy and an end to the so-called “War on Terror” that has destabilized, terrorized and devastated countries around the world for 2 decades: As Toby Blomé, CodePink Activist said, “It is shocking that in 2021, nearly 20 years after the 911 tragedy, that we still see no end in sight of the state of perpetual warfare waged globally by the U.S.  It’s even more shocking that with a Democrat-controlled Congress and a Democratic president, there is still no significant shift away from violence & war, and toward diplomacy and peaceful solutions. Equally disturbing is that individuals responsible for committing U.S. war crimes almost never get prosecuted, yet, whistleblowers, who leak truths about U.S. war crimes are given harsh sentences. President Biden plans for a 'compete withdrawal of U.S. troops’ in Afghanistan, but promises to keep using special forces, advisers, military contractors and armed drones as his 'weapons of choice.’  The people of Afghanistan, Yemen, Syria, Somalia, Iraq, Libya and elsewhere deserve a chance at peace.  We owe them much more than that.”

Eleanor Levine, another CODEPINK activist, emphasized the connection between U.S. led wars abroad targeting countries of color, and our perpetual war on communities of color within the U.S. “They are one and the same,” she claimed. We target, exploit, and murder to profit the few. It is encouraging to see that the anti-war movement is beginning to connect demilitarization at home with demilitarization abroad, defunding police with defunding the pentagon, and funding peace/justice and sustainable life at home and abroad."

“Biden, Biden, We Expect More:  NO WAR, NO WAR!”
“FREE DANIAL HALE!  Prosecute the real War Criminals, NOT the Whistleblowers!"
“What do we want?  Peace & Justice. When do we want it? Now"