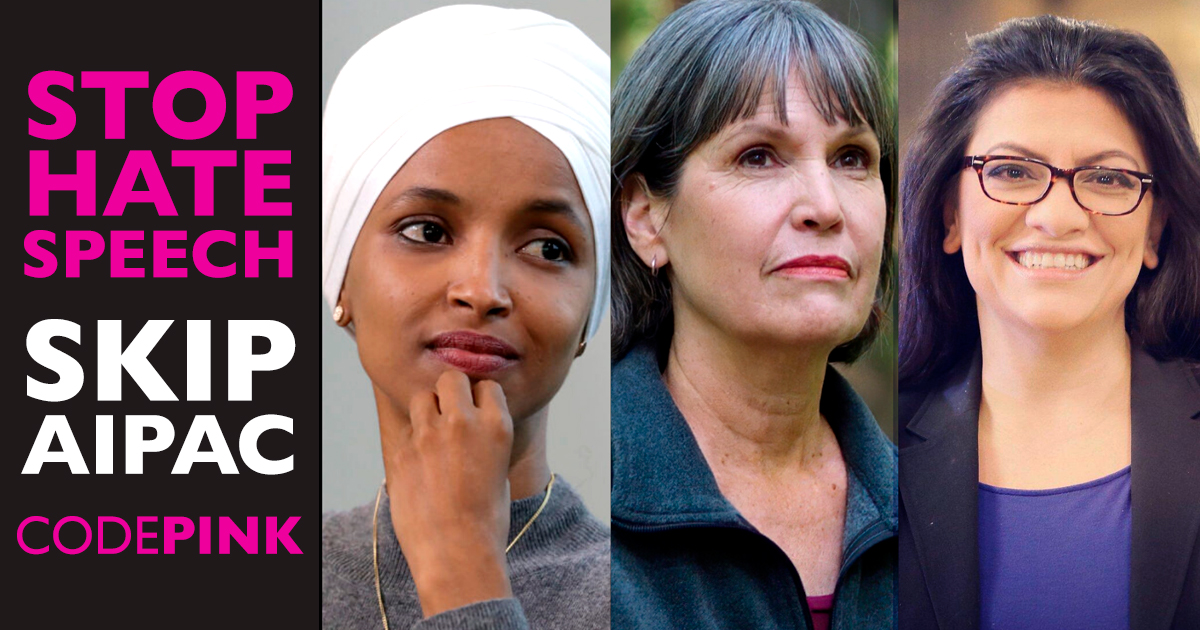 Did you hear about the Facebook ad by the American Israel Public Affairs Committee’s (AIPAC) attacking Representatives Ilhan Omar, Rashida Tlaib, and Betty McCollum? Next to pictures of the three congresswomen, the ad read: “It’s critical that we protect our Israeli allies especially as they face threats from Iran, Hamas, Hezbollah ISIS and — maybe more sinister — right here in the U.S. Congress,” Really? Supporting freedom, equality, and human rights for Palestinians is worse than ISIS?

Contact Congress and the 2020 presidential candidates and ask them to respond to AIPAC’s hate speech by refusing to attend the March 1-3 2020 policy conference in Washington, D.C.

Betty McCollum responded to AIPAC’s ad by stating that, “AIPAC’s language is intended to demonize, not elevate, a policy debate. Vile attacks such as this may be commonplace in the Trump era, but they should never be normalized. Hate speech is intentionally destructive and dehumanizing, which is why it is used as a weapon by groups with a stake in profiting from oppression… AIPAC claims to be a bipartisan organization, but its use of hate speech actually makes it a hate group.”

AIPAC is attacking McCollum because of her legislation in Congress to end Israeli military detention and abuse of Palestinian children. It is attacking Omar and Tlaib because they have taken brave positions as the first two members of Congress to support the nonviolent boycott, divestment, and sanctions movement (BDS). AIPAC is desperate. While it used to force Congress to provide unquestioned support and cover for Israel, its stranglehold is rapidly evaporating. Last year, thanks to pressure from CODEPINK, If Not Now, Jewish Voice for Peace, Move On and others, almost all the 2020 candidates skipped the AIPAC conference.

Take a moment to email your Senators, Representative and the 2020 presidential candidates. Ask them to tell AIPAC that they have no tolerance for hate speech and support freedom, dignity, and human rights for all. Tell them to skip the 2020 AIPAC conference.

We’ve been protesting AIPAC for years and we are happy to see this right-wing lobby losing power. It is a good sign for American democracy, a good sign for Palestinian rights, and even in the long-term interests of Israel. Together, let’s make the 2020 AIPAC conference the lowest attendance yet.