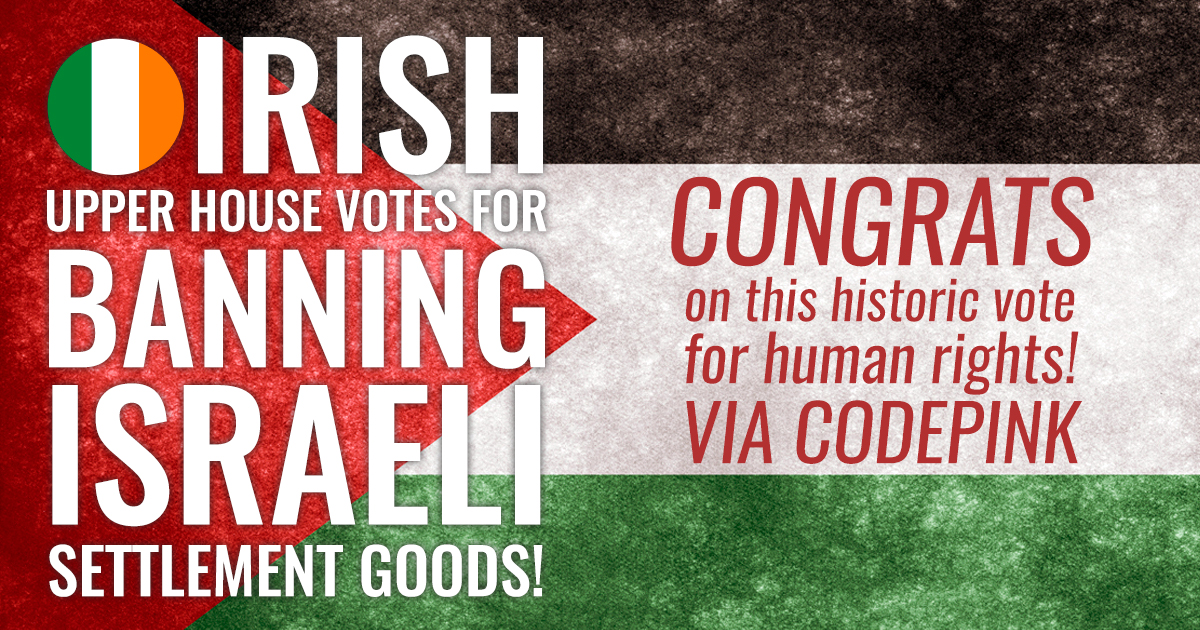 This is huge news; a major victory for Palestinian rights. Yesterday, Ireland’s Seanate voted in favor of legislation banning products from Israeli settlements. The bill, which will next go to committee and then to full vote (where it is expected to pass), will make Ireland the first country in Europe to end trade with illegal Israeli settlements on the basis of settlements being in violation of international law and Palestinian human rights.

The win was achieved through the hard work of the people of Ireland. The Irish have spent decades campaigning for Palestinian rights, and to end their government’s complicity in Israeli occupation. Share our congratulatory message to Ireland on Facebook and Twitter!

Since Trump came into power, Israeli settlement expansion and the forcible removal of Palestinian families have been in overdrive. In fact, the entire West Bank village of Khan al-Ahmar is right now facing imminent demolition. Tell your representatives in Congress to speak out immediately for Khan al-Ahmar. Tell them to stop the demolition!

As Palestinian families in Khan al-Ahmar are camped out in front of bulldozers trying to stop the demolitions, they are being beaten and arrested by the Israeli military. Despite the difficulties of their struggles, they are encouraged and energized by this historic win in Ireland.

Tell your representatives in Congress to act immediately to stop Israel from demolishing an entire Palestinian village.

It is not every day that we get to celebrate such a historic win. As we take this moment to revel in the actions of Ireland, let it be a reminder that the achievement of peace is not only possible, but also inevitable.