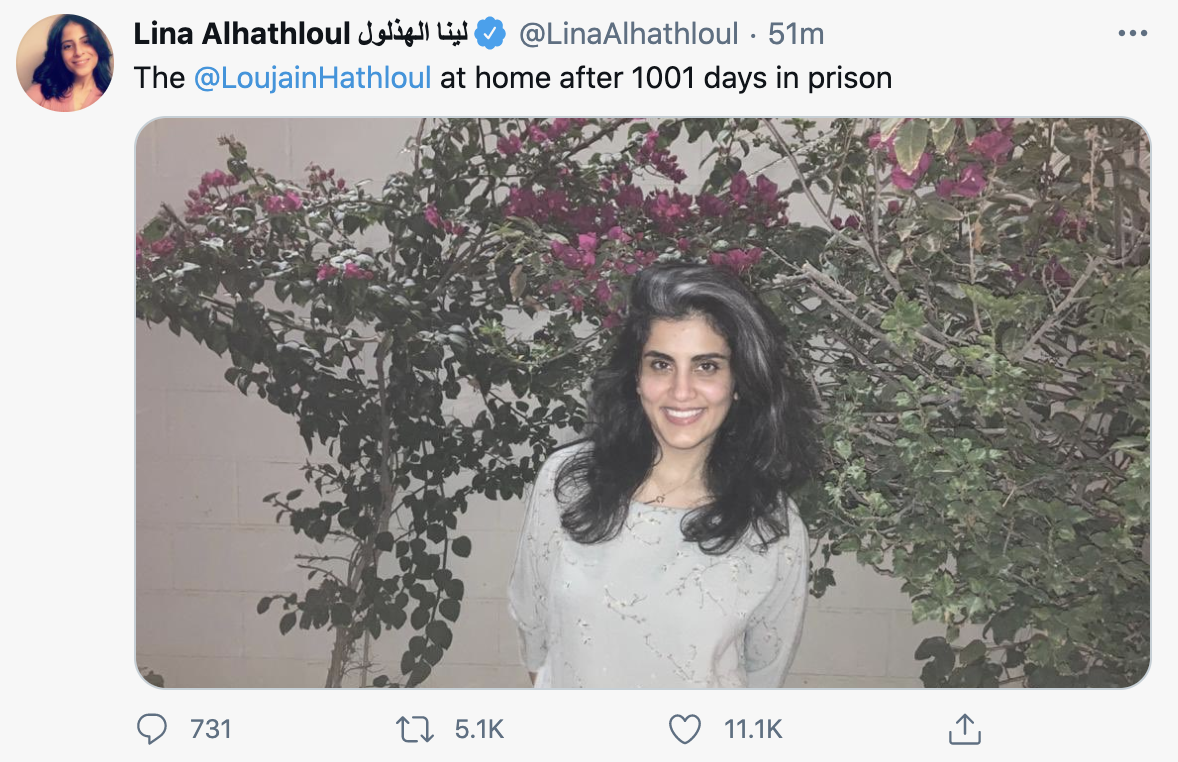 On Wednesday, February 10th, women’s rights activist Loujain al-Hathloul was released from prison in Saudi Arabia after over 1000 days in prison. Loujain has been a fearless women’s rights activist and the news of her release is uplifting. In December of 2020, Loujain was sentenced to almost six years in prison by a terrorism court. Her sentence came with a suspension of two years and minus time already served. She was set to be released in February or March of 2021, and it is welcome news that she was released on time. However, her release comes with conditions including a travel ban of five years where she will not be able to leave Saudi Arabia. She will also not be allowed to engage in other activism. The conditions of Loujain’s release must be dropped immediately, as freedom of movement is a human right. Justice for Loujain must include accountability for the people who tortured her and kept her in prison for so long.

Loujain Alhathloul is a hero. She successfully campaigned for women to have the right to drive in Saudi Arabia. Her arrest for campaigning for womens’ driving rights occurred just before the Kingdom gave women the right to drive. From her arrest in May 2018, Loujain was mostly held in pre-trial detention where she has faced immense abuse, including waterboarding, electroshock, beatings, and threats of sexual assault. If those injustices were not enough, the Specialised Criminal Court of Saudi Arabia sped through her trial. This included sudden hearings, where Loujain’s family was only given a day’s notice before the next step of her trial.

“Loujain’s family is asking people to not use the term ‘freedom’ to describe Loujain’s release. It’s true that she is not free just yet, we need to keep advocating for the conditions of her release to be dropped so Loujain can speak and move freely,” Danaka Katovich, the Yemen coordinator for CODEPINK, said.

Loujain’s sister Lina Alhathloul, who has been a tireless advocate for Loujain’s freedom, said, “Loujain stands for any citizen who speaks out with love for their country and wants the best for their country.”

“We stand with Loujain and are inspired by her bravery and audacity” said CODEPINK national co-director Ariel Gold. “Loujain teaches us all to campaign from the heart and never give up the goals of freedom, justice, and equality.”

Loujain is advocating for equality and justice for all Saudi citizens, out of pure love for the place that she is from. CODEPINK, a women-led feminist organization, stands unequivocally behind Loujain and all Saudi women’s rights and human rights defenders and will continue its advocacy and support.