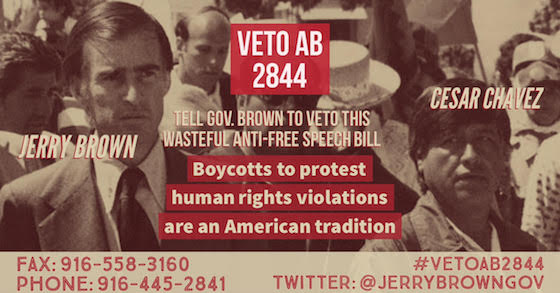 There is a dangerous bill in California that is nothing more than an attack on the First Amendment right to freedom of speech. It is intended to create a blacklist of those who support boycott, divestment and sanctions (BDS) campaigns for Palestinian human rights. AB 2844 already passed through the CA Senate and Assembly. At this point, Governor Brown has only 10 days to veto the bill. If Governor Brown does nothing, the bill will be approved by default.

This is not just an important issue for Californians, it is an attack on free speech that concerns all Americans. There has been a rapid spread of these sort of anti-free speech laws to multiple states, chipping away at our right to use economic activism to advocate for political change.

Civil liberties groups, including the ACLU, National Lawyers Guild, and the Center for Constitutional Rights, affirm the right to use economic activism in support of human rights and social justice causes. According to these organizations, this is a protected form of free speech under the US Constitution. A recent article in the LA Times explains how boycotts of Israel are a protected form of free speech.

Call, fax and tweet at Governor Brown -- tell him to protect our First Amendment right to boycott, and veto AB 2844!

Join CODEPINK, Jewish Voice for Peace, and the rest of the Coalition to Stop AB 2844 to tell Governor Brown to veto AB 2844!