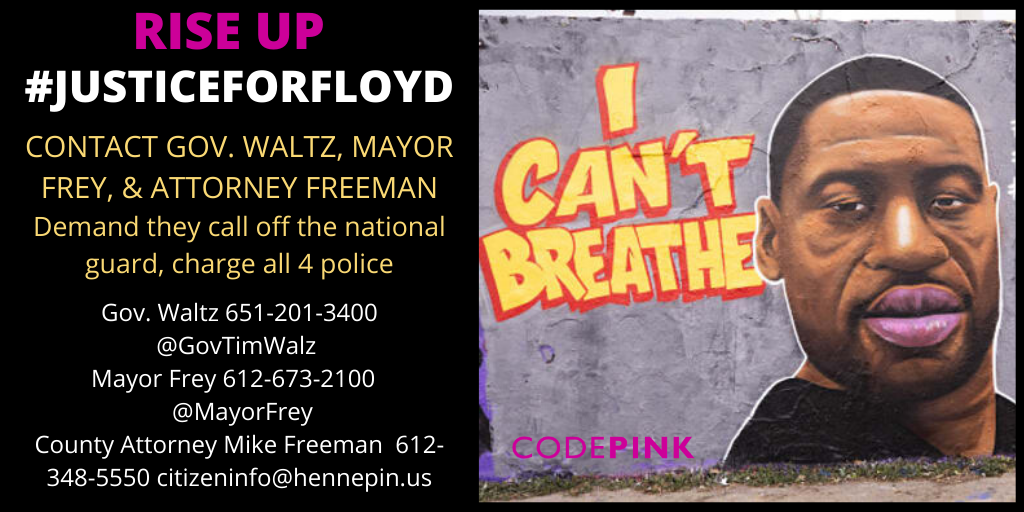 The obscene execution of George Floyd on Monday night by the Minneapolis police has sparked an uprising not only in Minneapolis but around the country.

In addition to joining protests in your area, here are ways you can help no matter where you live. We thank DSA (Democratic Socialists of America) for compiling this list.

Contact Minnesota Governor Tim Walz and demand he call off the National Guard.

Contact Minneapolis Mayor Jacob Frey and demand he call off the National Guard and push for charges for all four officers who were involved.

Fuel the protests and organizing by donating:

Food Justice For Frontlines: People in the area are hurting, the grocery stores in the neighborhoods are no longer open, and many people are out of work. Starting Saturday Twin Cities DSA is supplying hot food and groceries (including fresh produce purchased directly from a local farm) near the 3rd Precinct.

We know your hearts are aching like ours are. George Floyd’s murder is part of a pattern of racism that our nation is built on. And the police and military are part of the repressive forces, domestically and globally, that enforce this racist system of power and privilege. THIS BRUTALITY MUST END!

All of us must stand up because we know that silence is complicity, and WE WILL NOT BE SILENT.

So let’s join together to fight racism. Let’s redouble our efforts to build a world where all can breathe free of violence and injustice.

With angry heads and aching hearts,