Is Trump planning an October surprise for Venezuela? 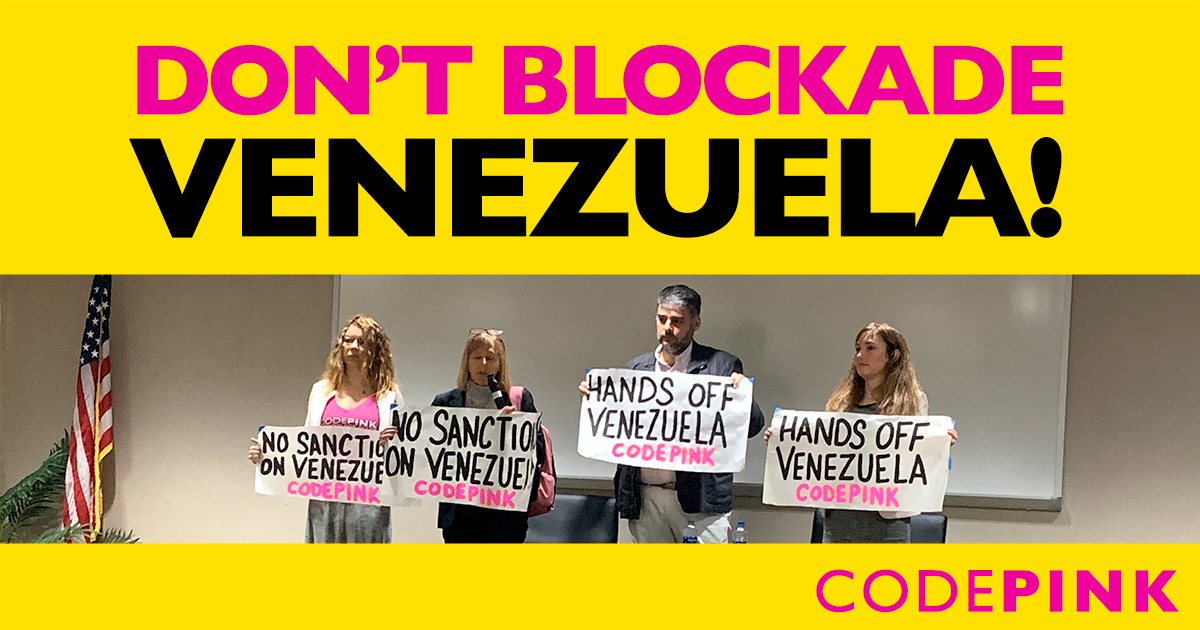 President Trump has been ramping up his threats against Venezuela, suggesting that he will order a naval blockade against the country. This would be an act of war. Is Trump planning this to help his reelection campaign?

We have to be ready for this possibility by sounding the alarm right now. As we learned in January when it seemed like war with Iran was looming, people come out to the streets and politicians speak out when something feels imminent. But there’s a lot of work to be done beforehand, and that includes educating our politicians and communities.

Join us in urging our members of Congress to tell the administration that a naval blockade is an act of war under U.S. and international law, and that the administration does not have the authority to impose a blockade or take any other military action.

Shortly after Trump threatened to “smash” and destroy the legitimately elected government of Venezuela, he and Defense Secretary Mark Esper met with Brazilian President Jair Bolsonaro and Colombian President Ivan Duque — suggesting that something ominous is in the works. The State Department is also using more aggressive rhetoric, declaring that the “Monroe Doctrine 2.0” is in effect and that this month will be “maximum pressure March”. They intend to intensify the sanctions on Venezuela, which, according to former U.N. special rapporteur Alfred de Zayas, have already killed 100,000 innocent civilians in Venezuela. Administration officials say they are halfway through the list of options to pressure the Venezuelan government, and Trump has directed them to speed up the process.

Venezuela is a complex issue, made even harder to understand by misinformation in the mainstream media and, as we saw at Trump’s State of the Union, by the seemingly bipartisan drive for regime change. As we get closer to the 17th anniversary of the beginning of the war in Iraq, we have already learned the lesson that U.S. regime change efforts result in chaos, disaster and crimes against humanity. Yet the Trump administration is intensifying its hybrid war against Venezuela just as the Venezuelan government and moderate opposition are engaging in dialogue that will likely be fruitful. The two sides recently created a commission to appoint new members of the National Electoral Council in advance of this year’s parliamentary elections.

There’s hope in Venezuela but Trump is trying to quash it! Tell Congress to say no to the war on Venezuela!

CODEPINK has been active in raising the alarm about the Trump administration’s hybrid war. We helped expose how our taxpayer funds are being used by USAID to pay Venezuelan right-wing extremists.

Earlier this week, we interrupted Elliott Abrams, Trump’s Special Representative for Venezuela, at an event in which he refused to recognize the human cost of sanctions. Together, with you, we’ll continue advocating for peace and dialogue, both within Venezuela and between the U.S. and Venezuela.

In solidarity with the Venezuelan people,

P.S. Last week we sent an alert about the upcoming Bolivian elections and how the OAS should not monitor them, given its role in sparking the coup. CODEPINK wants to invite Adriana Guzman, a Bolivian indigenous and feminist leader, to come to the U.S. to lobby Congress about investigating the OAS and having the U.N. monitor the next elections. Any funds raised by donations to this alert will help finance Adriana’s travel to the U.S. Please contribute if you are able and check out Medea Benjamin’s interview with Adriana from November 22.