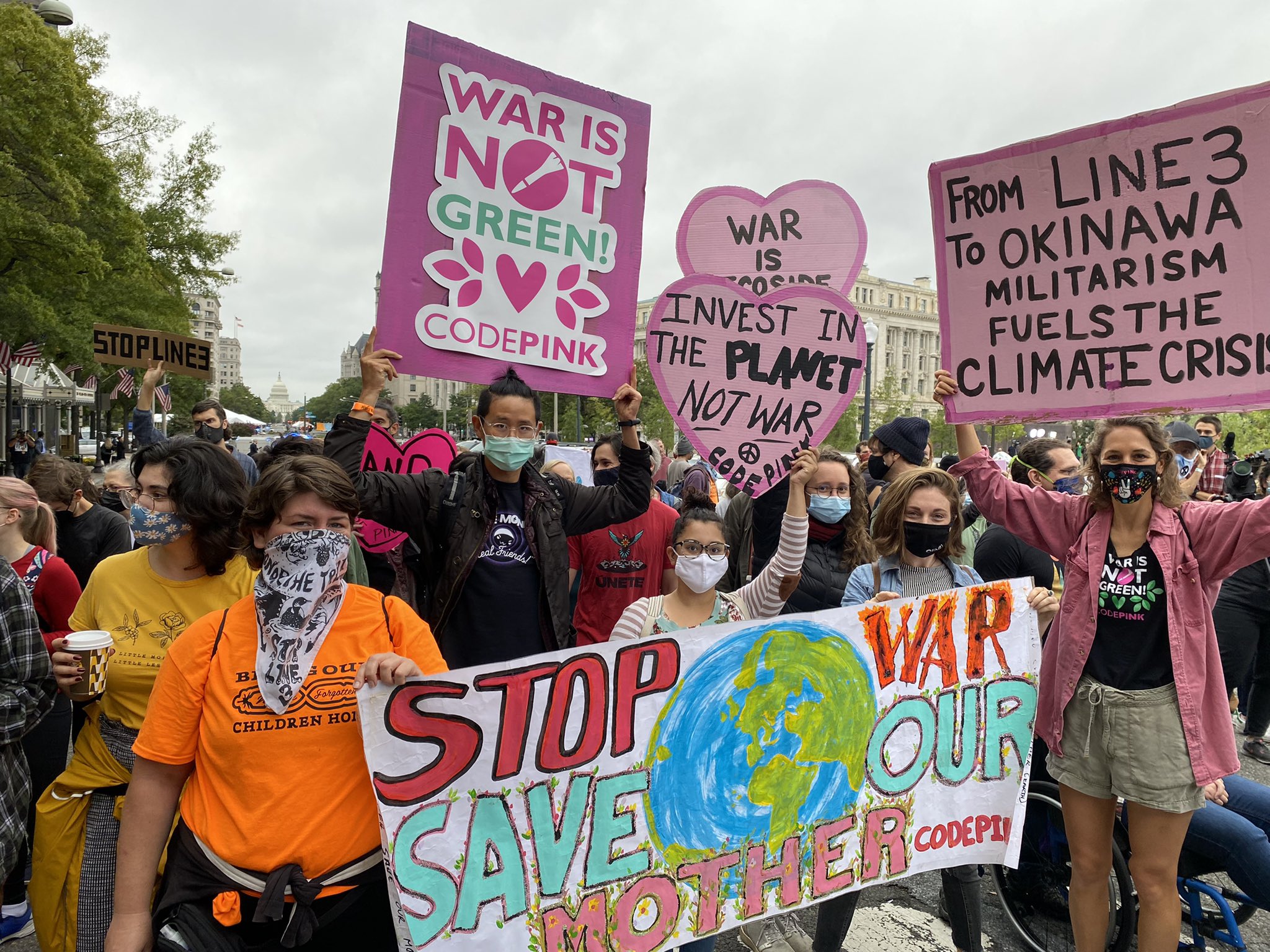 16 August 2022 – CODEPINK denounces the climate provisions of the Inflation Reduction Act and the politicians who celebrate it as a win for climate justice. We stand in solidarity with frontline communities who will face the extractive and poisonous consequences of this bill, and encourage other organizations in the anti-war movement to join us in condemning the bill as President Biden signs it into law today.

The Indigenous Environmental Network describes the IRA as a trojan horse: “By co-opting the language and demands of environmental justice and frontline communities towards environmental and climate justice, the IRA is a wholesale package to distract the public from the inaction of the federal government and ensure our path to climate catastrophe.” Rather than putting money into the hands of communities who need it, the climate provisions of the bill benefits the fossil fuel industry and other entities with zero accountability to affected communities.

Indigenous human rights lawyer and water protector Tara Houska responded to the IRA on Democracy Now by calling it a “doubling down on fossil fuels to get to renewables.” The federal government is required to lease millions of acres of public land and waters for oil and gas extraction as a prerequisite for any solar or wind energy projects. Houska points out that renewables, when initiated, will follow the same pattern of extractivism on Indigenous lands and near other BIPOC communities. By funding corporations rather than disadvantaged communities, the IRA will continue the U.S. colonial creation of sacrifice zones in the name of capital development. This can already be seen in Nevada, at Thacker Pass, where the Paiute and Shoshone people are fighting construction of a lithium mine on sacred land.

CODEPINK believes we must cut Pentagon spending and work towards a local and global peace economy that prioritizes the well-being of people and the planet instead of power and money. The Pentagon is the world’s largest institutional consumer of oil, and the wars it has waged have caused multi-generational environmental damage. This bill does nothing to confront these realities.

A real climate win would begin with giving communities greater control over their resources, not expanding access for institutions and industries that pollute the environment in the name of capital accumulation. The Inflation Reduction Act does just the opposite: it provides the means and rewards for corporations to create more extractive projects and hide behind false solutions like CCS, nuclear, and carbon trading. We must call the climate provisions of this bill for what they are: greenwashing on a federal level.

We cannot call the IRA a “start” for climate change; it is only a start towards continued extraction and perpetuating the war economy, now with renewables. This bill will hurt frontline communities: we must uplift their voices and find ways to support them as we work to create a truly sustainable economy which centers human and environmental needs over profit.