I just got deported from Israel 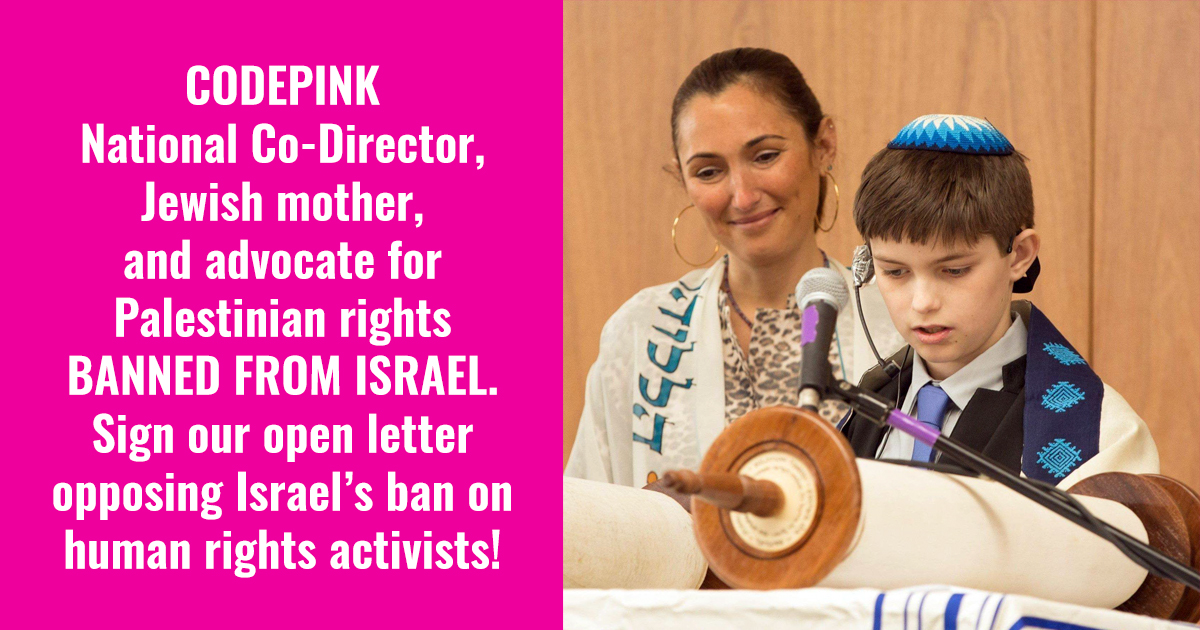 This is outrageous! Israel, the state that claims to be the only democracy in the Middle East, has just banned me from entry. Gilad Erdan, the Israeli Minister of Internal Security and Aryeh Deri, Israeli Minister of the Interior are charging me with the “crimes” of documenting the occupation, telling soldiers they are violating Jewish values and being an “extreme boycott activist.”

We at CODEPINK are proud of our work to use boycott and divestment to pressure Israel to stop violating Palestinian human rights! Join our open letter telling Israel to stop denying entry to human rights advocates. Along with me, over the past year, Israel has denied entry to members of the Center for Constitutional Rights, Jewish Voice for Peace and more. They are currently trying to expel Human Rights Watch’s Omar Shakir. This has got to stop.

Our campaigns have gotten Sodastream and Ahava to move out of the West Bank, RE/MAX to say they will stop receiving profits from settlement properties, G4S to end their Israeli contracts and more. We are continuing to pressure RE/MAX to fully extricate themselves from settlements and Airbnb to stop listing settlement properties. Imminently, we will be launching a campaign to Stop Elbit, an Israeli weapons company that kills Palestinians in Gaza and assists with family separations on the US-Mexico border.

Read about my experience having two high-level Israeli Ministers demand I not be allowed entry at the Tel Aviv airport. Sign CODEPINK’s open letter calling on Israel to stop blacklisting human rights advocates.

Israel only welcomes those who either support occupation or are willing to be quiet. On June 30th, right before I was denied entry, soldiers at the Gaza fence killed 11-year-old Yaser Abu al-Naja. He was the 16th child to be killed since the Great March of Return protests began on March 30. Gross crimes like this are what must be banned, not those coming to advance freedom, justice and equality.

Towards freedom for Palestine,
Ariel and everyone at CODEPINK