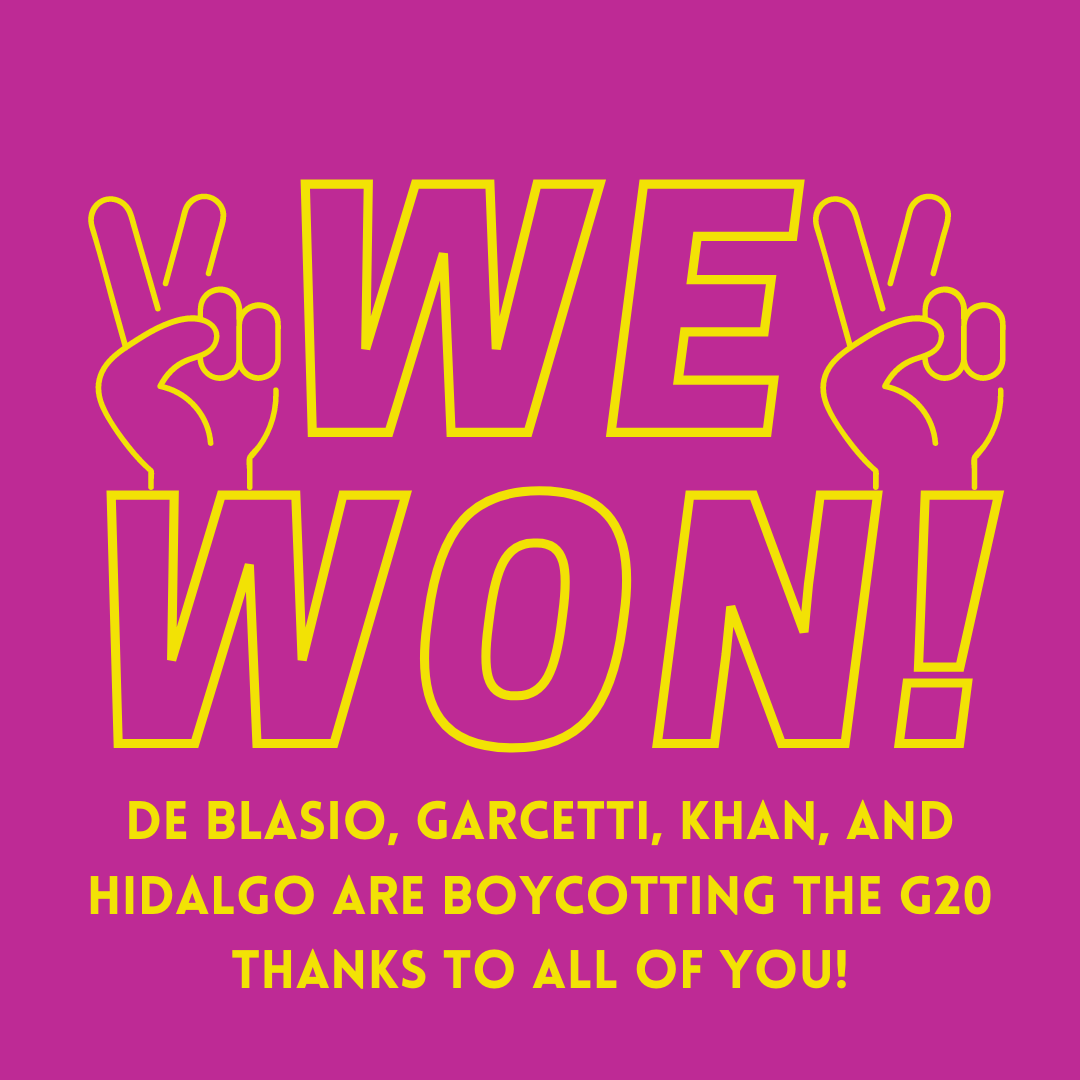 I come to you with good news. Responding to pressure from CODEPINK and other peace groups around the world, four mayors of the largest US and European cities have announced that they will not be attending the G20 summit hosted this year by Saudi Arabia. Bill de Blasio of New York City, Eric Garcetti of Los Angeles, Ann Hidalgo of Paris and Sadiq Khan of London all answered the calls to boycott the summit and stand against the war crimes committed by Saudi leadership.

Last week, we sent out an email to our New York City supporters asking them to write to de Blasio and demand he boycott the summit. The very next day, the mayor’s office announced that de Blasio would not be attending. In the statement, De Blasio said “We cannot lead the world without speaking out against injustices.” CODEPINK issued a statement commending the mayor’s decision. Mayor Garcetti’s announcement followed the next day. The two US mayors did the right thing and listened to the concerns of their residents. These efforts would not be possible without all of you, and now that we have four wins, we think we can get another one. CODEPINK is calling on Irene Natividad of the GlobeWomen Research and Education Institute to boycott the W20 summit, which is a G20 summit event focused on women. Will you join us and write to Natividad about boycotting the summit?

Garcetti and De Blasio’s decisions make it clear: American politicians are no longer blind to Saudi Arabia’s crimes. They are well aware that their residents and the global community do not want their leaders cozying up to human rights abusers. Lyric Thompson boycotting the W20 summit is a good start. The next step is to demand more. Join us and tell Irene Natividad to boycott the W20.

The U20 summit, the G20 event that mayors were invited to, started yesterday. Without a doubt it made a statement that mayors of four major world cities do not support the Saudi monarchy and its human rights violations in Yemen. The W20 starts on October 21st, so we still have time to demand that more delegates boycott that portion of the G20 summit!

Wins like these make me hopeful that together we can put a stop to MBS’s aggression, not only against the people he is supposed to be leading, but his neighbors too.