Give a Pink Slip to the Military Industrial Complex 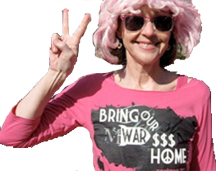 We're in the midst of an Afghanistan Week of Action and we need your help to give a pink slip to the military industrial complex. The House is starting to discuss the annual military spending bill, giving us the best chance yet to end the Afghanistan War.

Demand an amendment be adopted striking Section 1034, "Affirmation of Armed Conflict with Al-Qaeda, the Taliban, and Associated Forces," completely from the bill. Terrorism must be stopped by the rule of law, not a never-ending war.

Demand a serious debate about the Afghanistan War and tell your representative to vote to immediately end funding for the war and occupation.

2. Email Congress to demand an end to the Afghanistan War.

3. Tweet @Congress: Now is the time to #ExitAfghanistan! Stop wasting billions we need at home on war. #endwar

4. Post to Facebook: Join the Afghanistan Week of Action. Tell Congress to Exit Afghanistan and bring the money home.

5. Contact your mayor to cosponsor the War Dollars Home Resolution.

The Congressional Budget Office estimates the bill represents $690 billion in spending for a single year of supporting the US Empire's military. According to National Priorities Project, 59% of the discretionary spending for FY12 will be devoted to military spending, whereas only 4% will be spent on Education and 5% on Health. Let's rise up and declare life-affirming activities are our only budget priorities. It's time to demand the federal budget reflect the people's priorities.