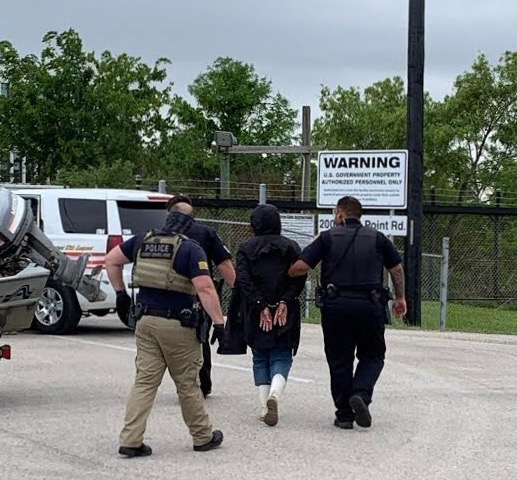 (Galveston, TX) On Wednesday, May 12th 2021 - Texas and CODEPINK activists, Diane Wilson and Ann Wright, have been arrested in front of the Galveston District U.S. Army Corps of Engineers. For the past 36 days, Diane Wilson has been hunger striking to demand Houston oil company Max Midstream stop exporting crude oil fracked from the Eagle Ford Shale & Permian Basin, unearthing mercury contamination from the Alcoa Superfund site in Lavaca Bay. If it continues, this project would devastate local efforts to restore fisheries and maintain economies. The project would sacrifice both community and climate to create profit for a few oil companies.

Today's action is motivated by a month of silence from POTUS and USACE on this coalitions demands. 81 organizations sent a letter to the Biden Administration calling to revoke the authorization of this project, 500+ individuals have signed a petition to Biden, 35 kayaktivists rallied for a flotilla in Lavaca bay, and 40+ people across the globe have fasted in solidarity with Diane.

Diane Wilson expresses her frustration and motivation for these efforts: "We have done everything possible to stop the dredging of Matagorda Ship Channel and today I am willing to be arrested". Diane who grew up near the Lavaca Bay said, "I am also fasting for the fishers who work on the bay [...] My hunger strike and arrest are symbols of massive citizen opposition to [destroying] the fragile ecosystems and sustainable economy of Matagorda Bay".

Ann Wright of CODEPINK explains, "As a retired US Army Colonel, I am willing to be arrested to bring national attention to the dreadful and dangerous decision by the US Army Corps of Engineers". This deal would create a deep ship channel to be used as a crude oil export terminal for massive oil tankers from Max Midstream, as part of a Gulf-Coast wide race to build new oil and LNG export facilities. Wright also stated, "I call on another Army Colonel, Colonel Timothy Vail, the head of the Galveston office of the [USACE] to revoke the dredging permit and save the bay for the people, not profits of oil companies".

A climate activist on the scene, Kathy Redman who grew up vacationing on the Galveston coast, explains the difference returning to the bay 37 years later with her own children: "For one thing, tar balls were now washing up on the beaches [and] the constant stink from the oil refineries made it clear that our coastline had become a sacrifice zone," Redman implores, "We’re at a critical point where every individual has to decide whether to remain silent and allow the destruction of our planet to play out, or take a stand".

Ultimately, Ms. Wilson and supporters are demanding that President Biden revoke authorization for the dredging project. The letter to the Biden Administration also outlines a clear case for USACE to conduct a Supplemental Environmental Impact Statement (SEIS). This dangerous mercury contamination puts the livelihoods of local fisherfolk - most of whom are people of color - at risk to benefit oil company profits.

You can find more videos and images on Diane's Twitter, Facebook, and on TikTok @unresonabledw of the arrest and her efforts to #DefendTheGulf!