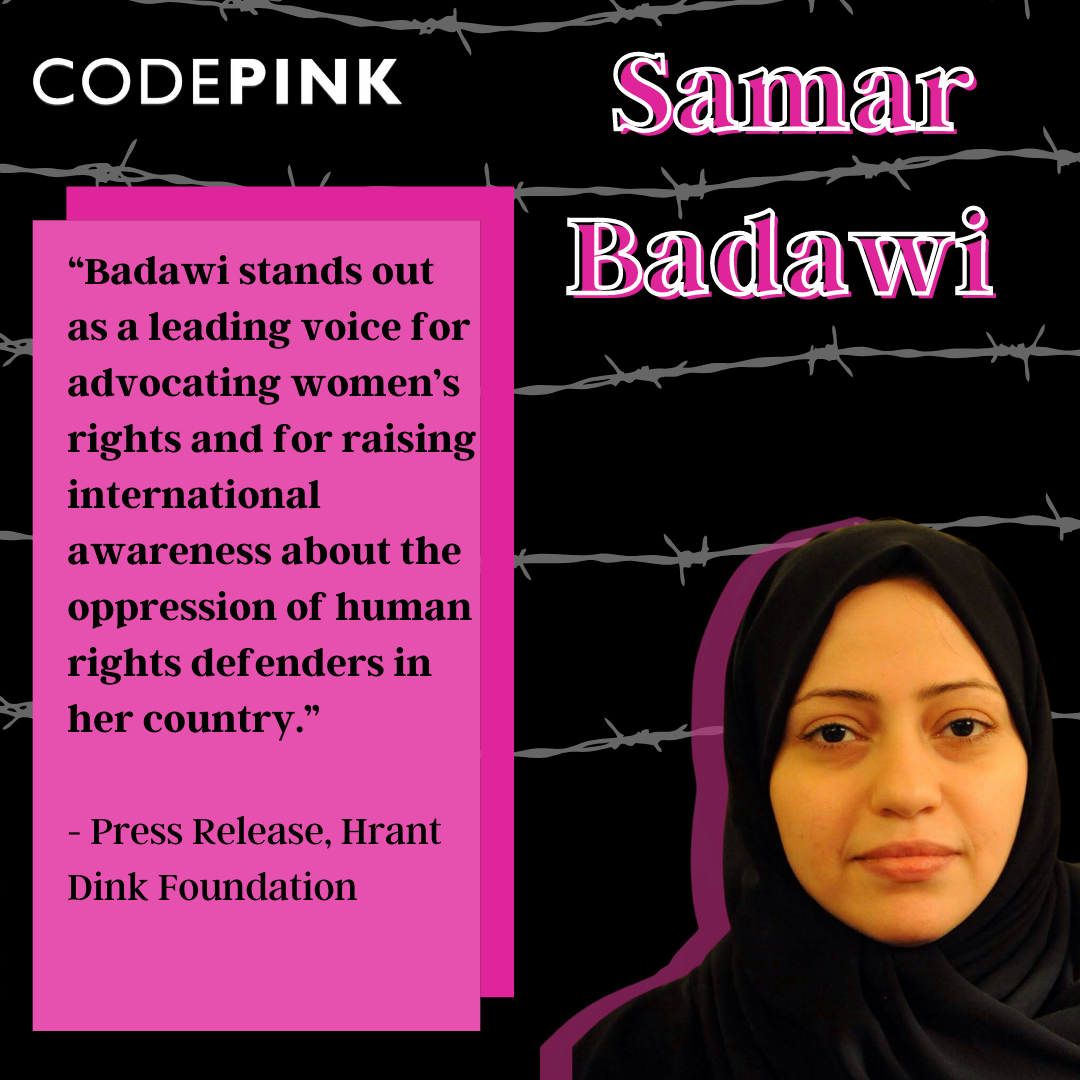 “Badawi stands out as a leading voice for advocating women’s rights and for raising international awareness about the oppression of human rights defenders in her country.”
—Press Release, Hrant Dink Foundation

Samar Badawi is a Saudi human rights defender who has challenged the Saudi government by attempting to register to vote and drive her own car. She has been jailed for her activism and faces ongoing harassment and from both the government and religious institutions. Badawi took her father to court for refusing to allow her to marry, charging him with adhl (violating Islamic law by forcibly keeping her unmarried). The Jeddah General Court ruled in her favor, but her father also took her to court for "disobedience" after she fled his home to a domestic violence shelter. She was once again jailed in 2018 after more arrests. Despite the revisions to Saudi Arabia’s male guardianship system, and being the winner of the U.S. Department of State’s International Women of Courage Award, she currently remains in prison.

Click to Tweet: Can you imagine facing 20 years in prison for advocating for women’s rights? That’s what’s happened to Saudi activist Sama Badawi, who's been imprisoned by the Saudi regime since 2018. We stand in solidarity with women political prisoners today & every day. #FreeTheWomen 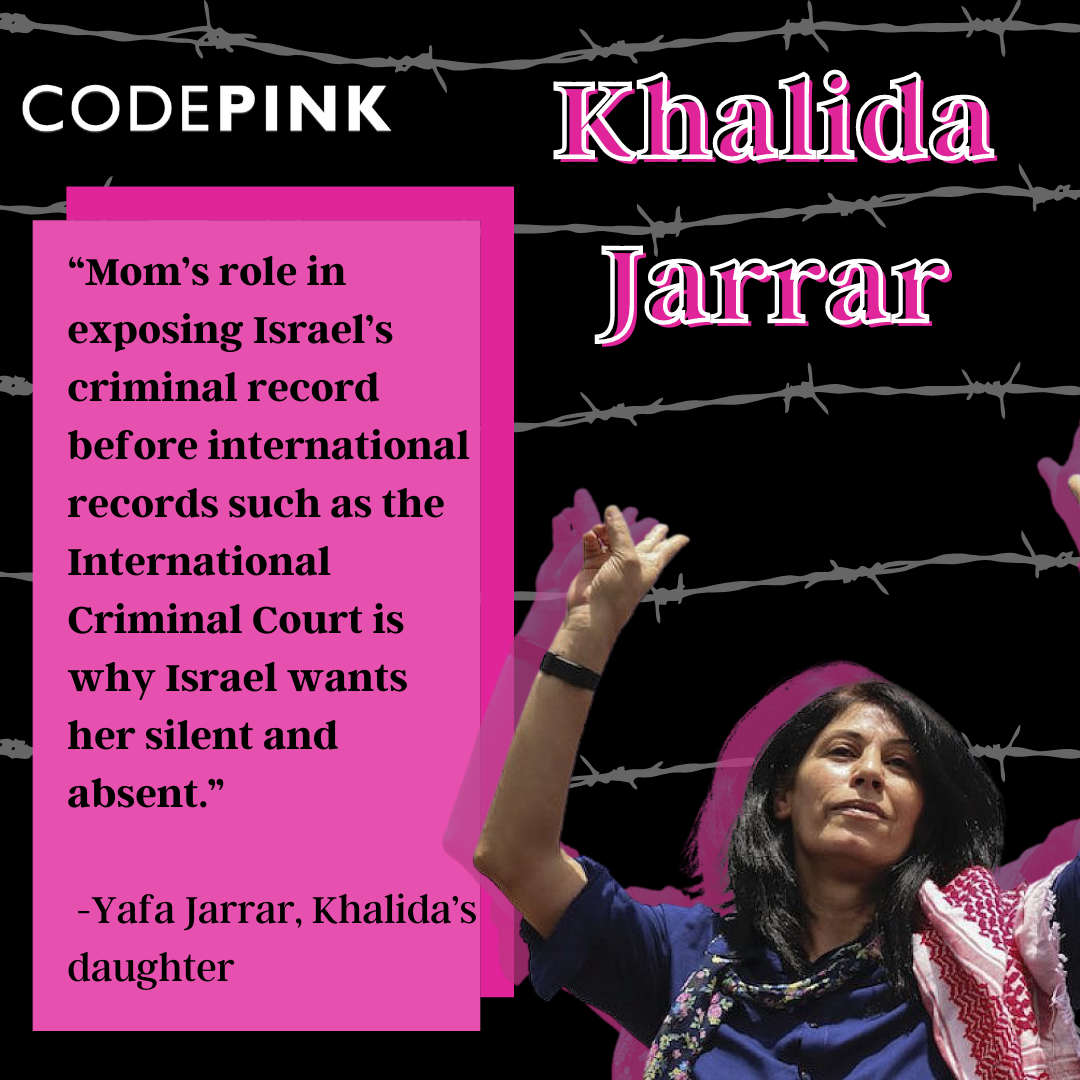 “Mom’s role in exposing Israel’s criminal record before international records such as the International Criminal Court is why Israel wants her silent and absent.”
—Yafa Jarrar, Khalida’s daughter

A prominent political activist and member of the Marxist-Leninist organization Popular Front for Liberation of Palestine (PFLP), Khalida Jarrar was arrested at her home in Ramallah on 31 October 2019 and has since been in detention. At 3 AM, her home was raided by over 70 soldiers and 12 military vehicles. In her most recent arrest in March of 2021, she was sentenced to two more years in prison. She had been arrested three times prior by the Israeli Military. Jarrar is one of 5,500 Palestinian political prisoners being held under Israel’s abusive administrative detention, which allows Israel to detain Palestinians indefinitely without charge or trial and based on secret evidence.

Click to Tweet: Palestinian activist & lawmaker Khalida Jarrar has been under Israeli administrative detention since Oct 2019. There are no charges against her. There has been no trial. Join us in solidarity with Jarrar & all political prisoners. https://www.codepink.org/freekhalidajarrar 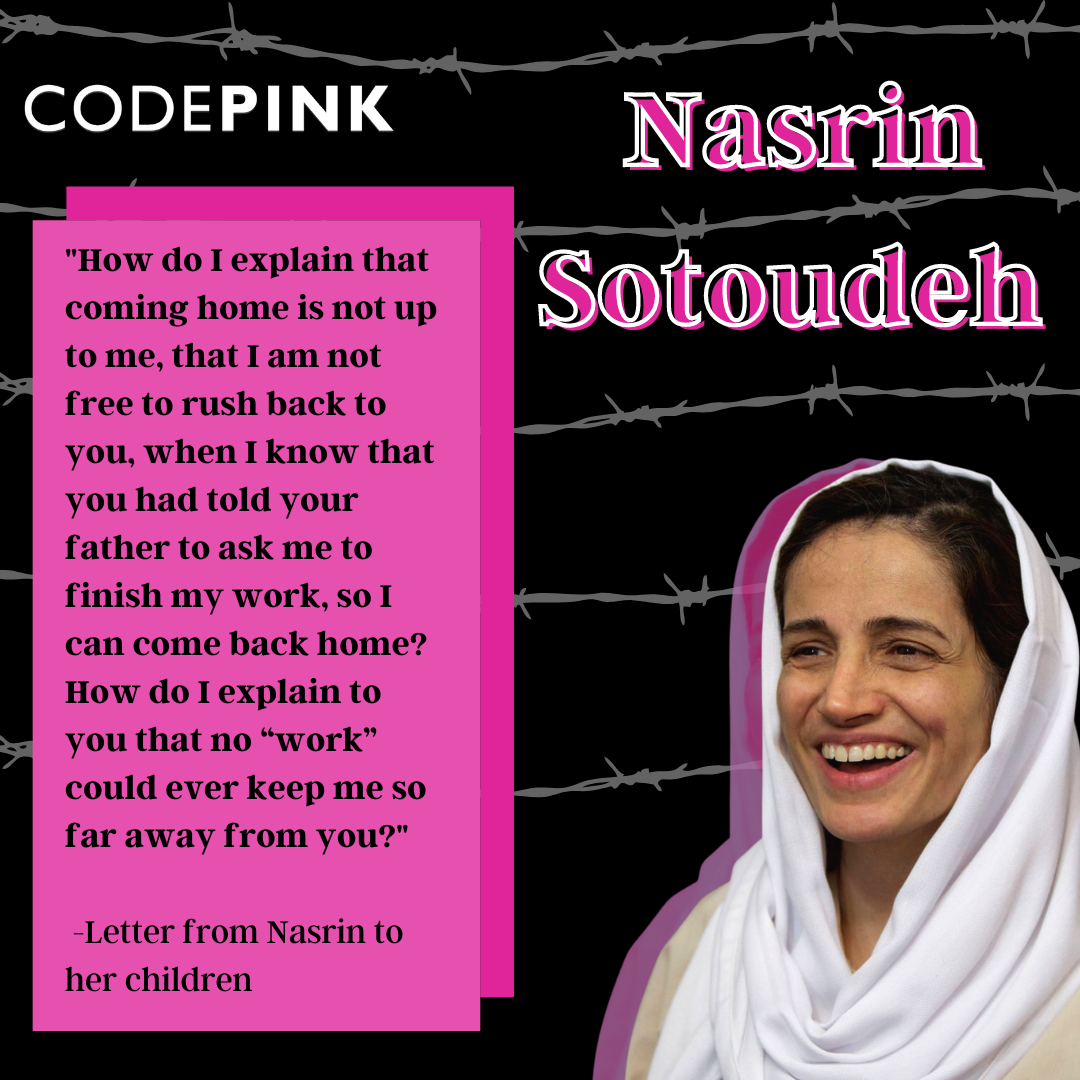 Nasrin suffers from a severe heart condition, and within a month of being sent to Qarchak, she contracted COVID-19. Thanks to global attention and pressure, Nasrin was granted a three-day medical leave on January 8, which was briefly extended so she could have a much-needed angioplasty. However, this leave was abruptly canceled on January 19, the same day the government froze her family’s bank accounts.  She was arrested in June 2018, in part for defending women who challenged Iran’s mandatory hijab law by publicly removing their headscarves and waving them like flags. She was sentenced to decades in prison and dozens of lashes. Yet even while held in Tehran’s massive Evin prison, Nasrin continued to challenge the authorities. Last August, she launched a 46-day hunger strike to bring attention to dangerously unhealthy conditions in Iran’s prisons.

Click to Tweet: Nasrin Sotoudeh was arrested in 2018 for defending women's rights. She was granted medical leave on January 8th for a much needed angioplasty, but that cancelled the same day the gov’t froze her family’s bank account. Nasrin must be freed today! 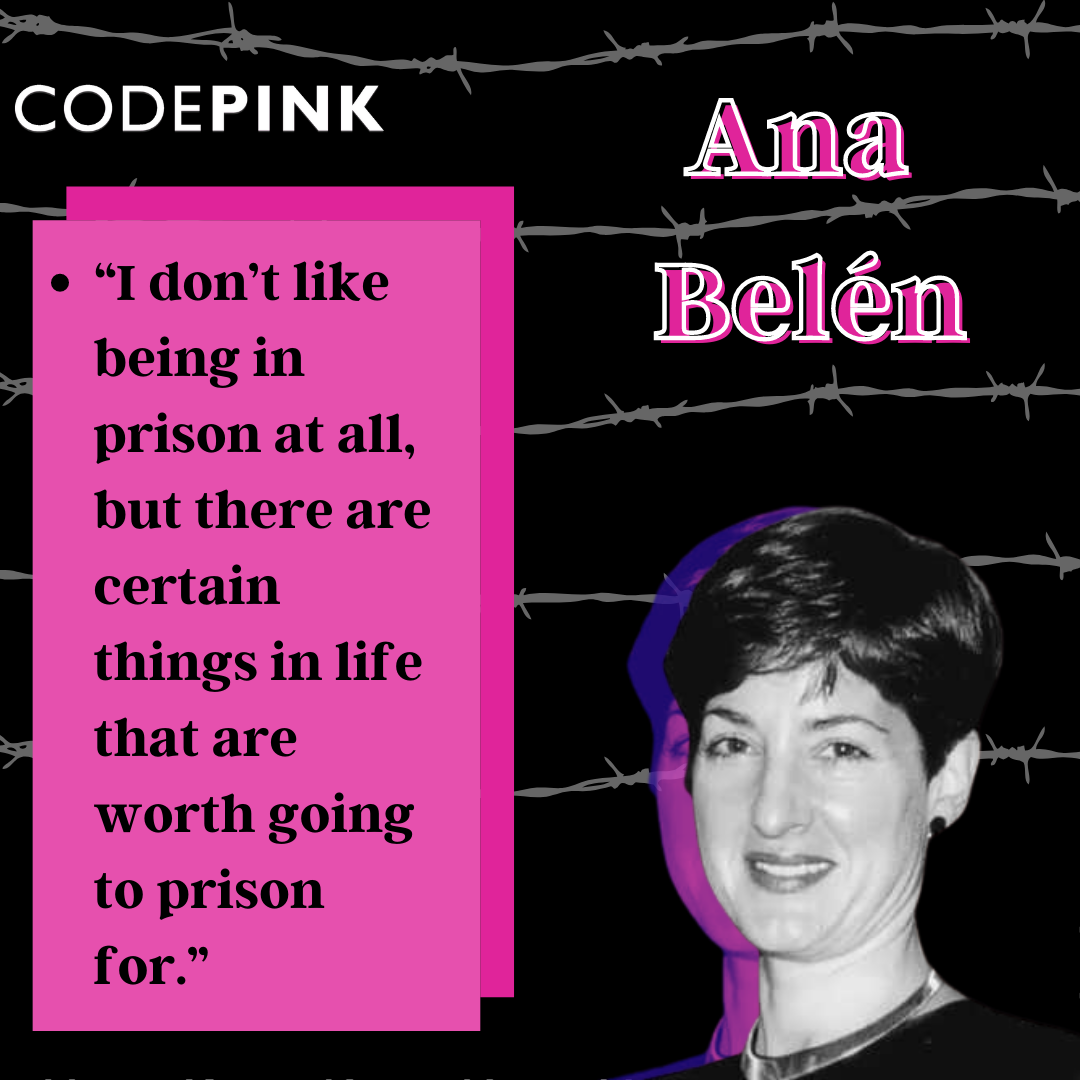 Ana Belén has been incarcerated since 2001 in the Federal Medical Center prison in Fort Worth, Texas. She was formerly a senior analyst in the Pentagon's Military Intelligence Agency and was responsible for all data involving Cuba. She was charged with espionage in 2001 and, thanks to the tireless work of supporters and activists, she is now set to be released in 2022. She learned of many ways the US was attempting to destabilize Cuba and proceeded to share this information with Cuban officials throughout her career. She felt that what the US was doing to Cuba was wrong and cruel and acted on her conscience rather than the law.

Below is a quote from Belen during her plea to the judge:

“Your Honor, I engaged in the activity that has brought me before you because I obeyed my conscience rather than obeyed the law. I consider our government’s policy towards Cuba to be cruel and unjust, deeply unfriendly, I considered myself morally obliged to help the island defend itself against our efforts to impose our values and our political system on it… Cuba’s right to exist, free from political and economic coercion, may not justify giving the island classified information to help it defend itself. I can only say that I did what I considered most appropriate to counter a great injustice.”
Learn more here.

"I obeyed my conscience rather than obeyed the law.” Ana Belén has been incarcerated by the US for 20 years for alleged espionage & her work against imperialist US policy towards Cuba. Join us in the call to #FreeTheWomen. #LibresLasQueremos 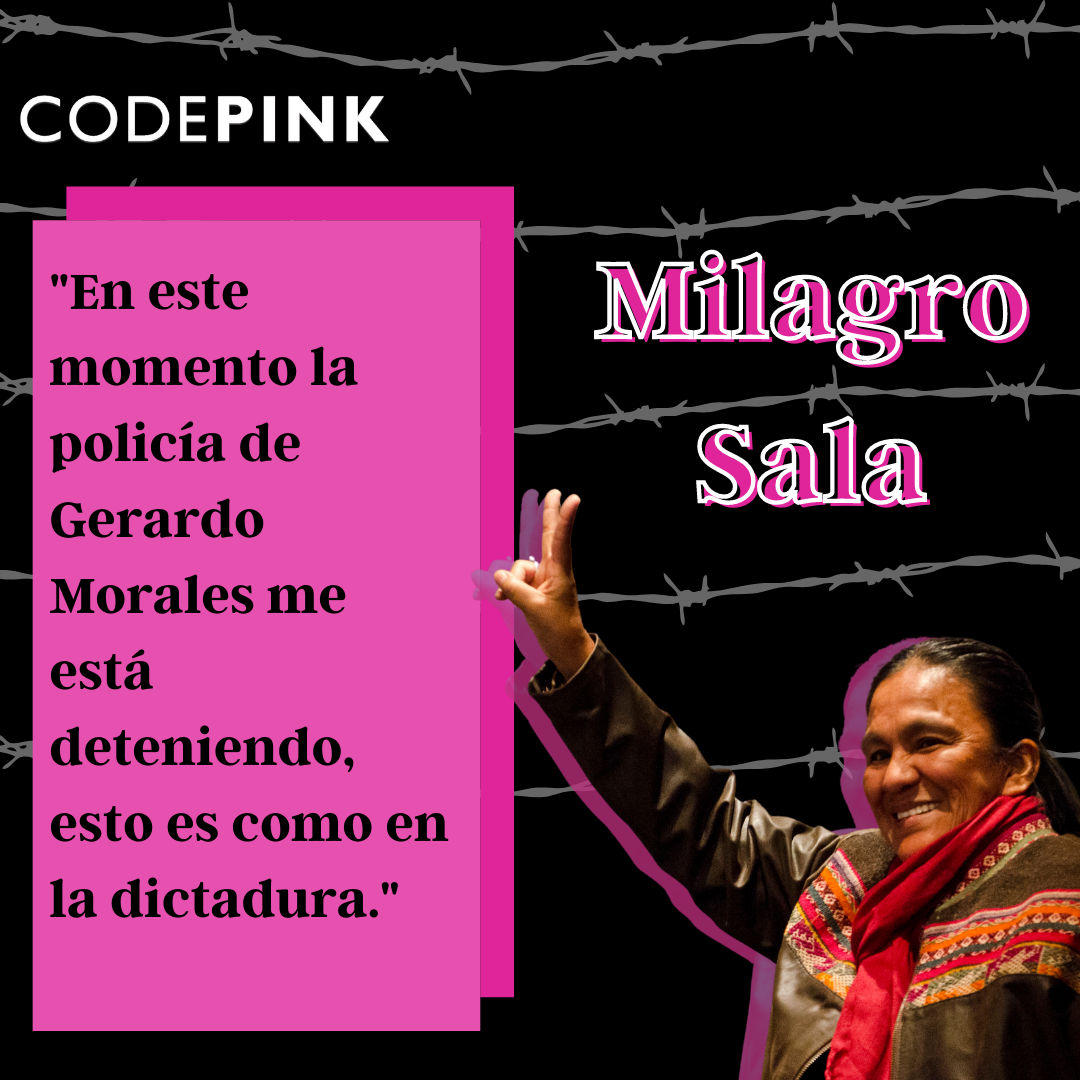 Milagro Sala is an indigenous activist and passionate advocate against conservative politicians in the Jujuy Province of Argentina. She is also the founder of the Tupac Amaru Neighborhood Association, an ever-growing group providing mutual aid to its members. In January of 2016, she was arrested and charged with sedition and abetment after organizing a month-long protest against new policies brought by Jujuy Province Governor, Gerardo Morales. As a member of the Mercosur parliament, Parlasur, her arrest is illegal. Sala has spent over three years in jail under inhumane conditions and has been under house arrest since 2019.

Click to Tweet: As a member of the Mercosur parliament, Parlasur, Milagro Sala’s arrest is illegal. Her work provides necessary mutual aid for the Jujuy Province community and she must be freed today! #LibresLasQueremos 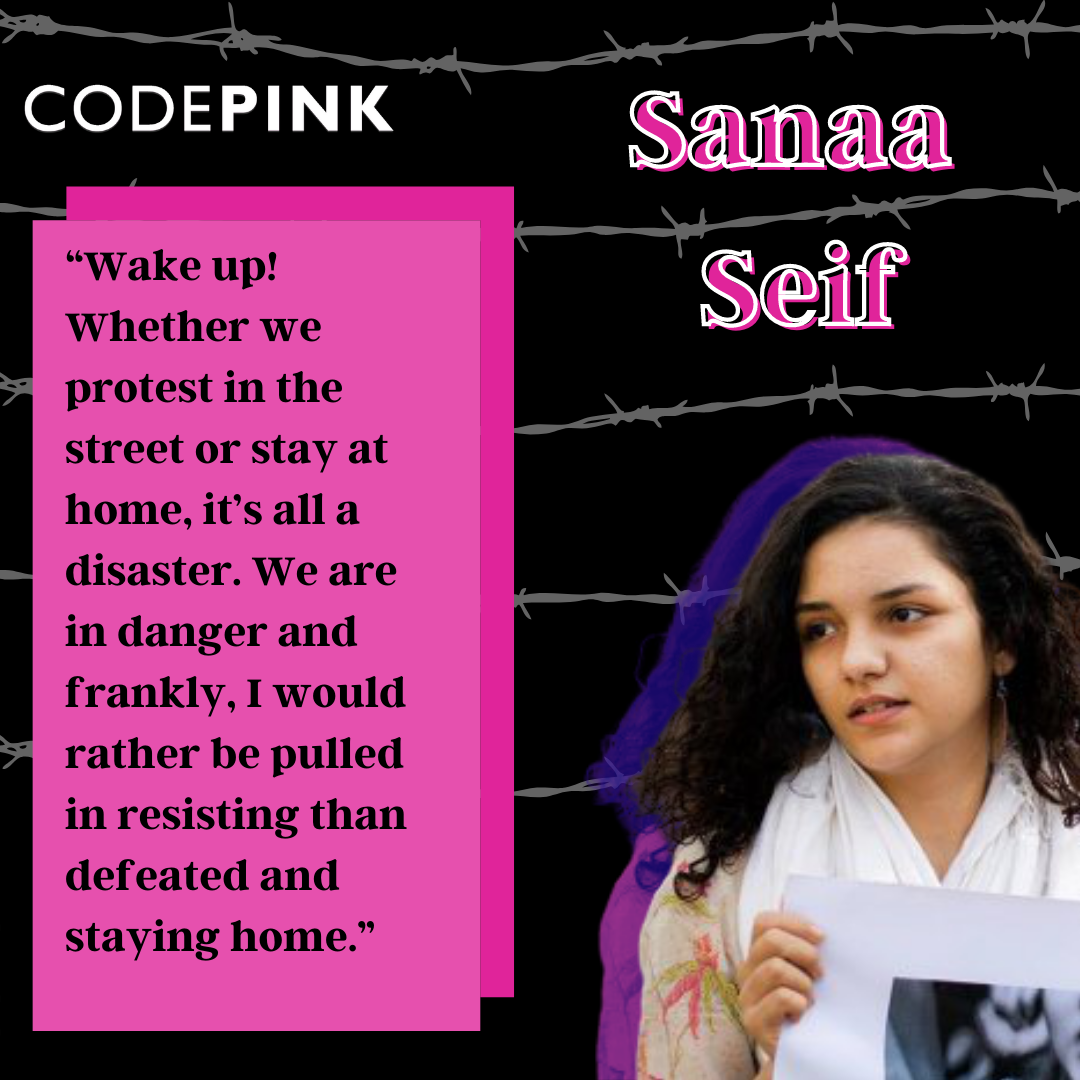 "An Egyptian court has convicted the 26-year-old film editor, writer and activist Sanaa Seif on charges of spreading false news, misusing social media and insulting a police officer on duty, sentencing her to 18 months in prison. Sanaa’s sister, Mona Seif, confirmed the March 17 conviction in a tweet stating that her sister has been charged with spreading "false news related to the Covid 19 pandemic,” and "using a Facebook account to terrorize people.” - Priti Gulati Cox (@PritiGCox)

All Sanaa wanted was a letter from her imprisoned brother. Sanaa Seif's imprisonment is unjust! Free Sanaa now! #FreeTheWomen