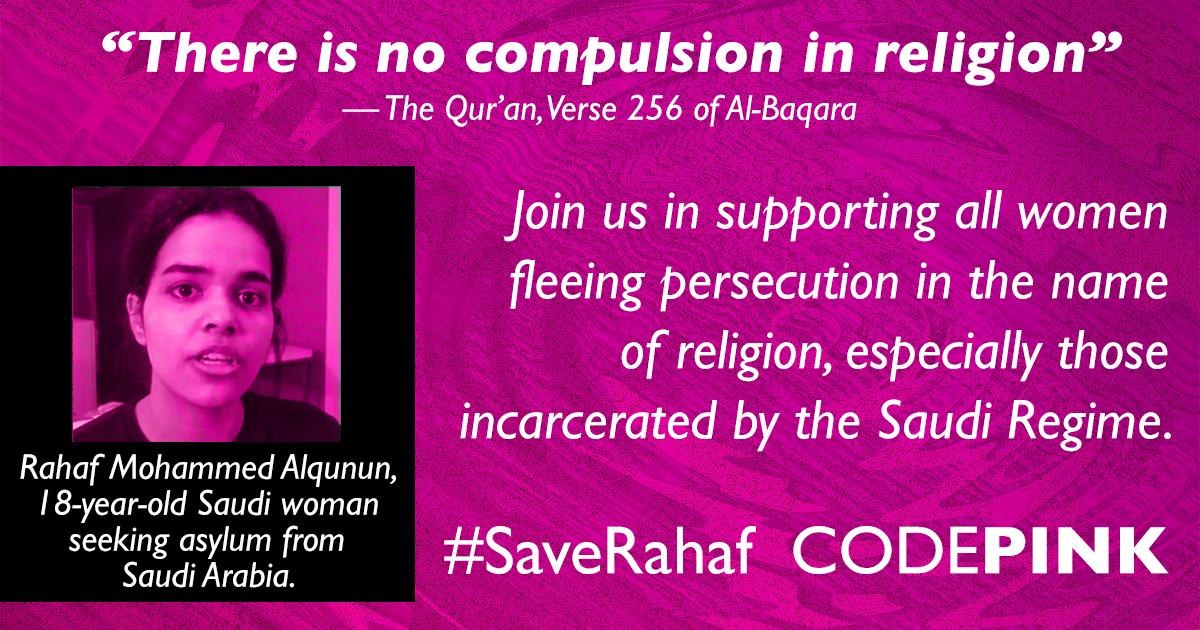 On Saturday January 5, 2019, 18-year-old Saudi woman Rahaf Mohammed al-Qunun barricaded herself in a Bangkok airport hotel, refusing to be deported to Kuwait, where she feared her family would kill her for renouncing Islam and refusing to abide by the repressive Saudi guardianship system.

"My life is in danger. My family threatens to kill me for the most trivial things," she tweeting, appealing on social media for support from the international community that she not be deported. After around 48 hours, Thai authorities said that Rahaf would be allowed to stay in Thailand pending an assessment by the UN refugee agency (UNHCR) over the coming week. Rahaf is seeking to travel to Australia where she plans to apply for asylum. Thanks to an outpouring of concern from the international community, the UNHCR was alerted to Rahaf’s case and was able to intervene, but we are still concerned about her well-being.

Join our letter asking the State Department to condemn the Saudi government’s guardianship system that endangers the lives of women like Rahaf, and to speak out against the Saudi government's crackdown on women activists, arresting, imprisoning, and torturing women—and even possibly sentencing them to death.

Saudi women activists currently imprisoned include Israa al-Ghomgam, arrested in 2015 and facing the death penalty, Loujain al Hathloul who fought for the right of women to drive in Saudi Arabia, and Samar Badawi, winner of the Department of State’s International Women of Courage Award in 2012.

Tell the State Department to publicly call for the unconditional and immediate release of Saudi women activists.

We are appalled at the Saudi government’s arrest and imprisonment of Saudi women activists. We are also appalled by the guardianship system that controls every aspect of women’s lives.

We are gravely concerned about Loujain al Hathloul, who fought for the right of women to drive in Saudi Arabia, and Samar Badawi, winner of the Department of State’s International Women of Courage Award in 2012.

Right now the Saudi government is seeking to execute women’s rights activist Israa al-Ghomgam, who has been imprisoned since 2015. She faces the death penalty, along with four other women who dissented against the repressive Saudi regime, like Loujain al Hathloul who was arrested for her advocacy for the right women to be able drive.

We call on you to condemn the Saudi guardianship system and crackdown on Saudi women’s rights advocates and publicly call for their unconditional and immediate release of the women activists who are currently in prison.

Israa’s life is on the line. And at least 13 other women are currently being detained for their activism, including Loujain al Hathloul and Samar Badawi, a leading advocate for women’s fundamental rights and a winner of the Department of State’s International Women of Courage Award in 2012. She was arrested and imprisoned as part of a broad crackdown on human rights advocates.

“Sentencing Israa al-Ghomgam to death would send a horrifying message that other activists could be targeted in the same way for their peaceful protest and human rights activism,” says Amnesty International’s Middle East Director of Campaigns, Samah Hadid. “The charges against Israa al-Ghomgam, which mostly relate to her peaceful participation in protests, are absurd and clearly politically motivated to silence dissent.”

It is imperative that you take action. Condemn the guardianship system and crackdown on Saudi activists and call for the unconditional and immediate release of the activists!