Five Years After Obama’s Cuba Opening, Cubans Are Reeling From the “Trump Effect” 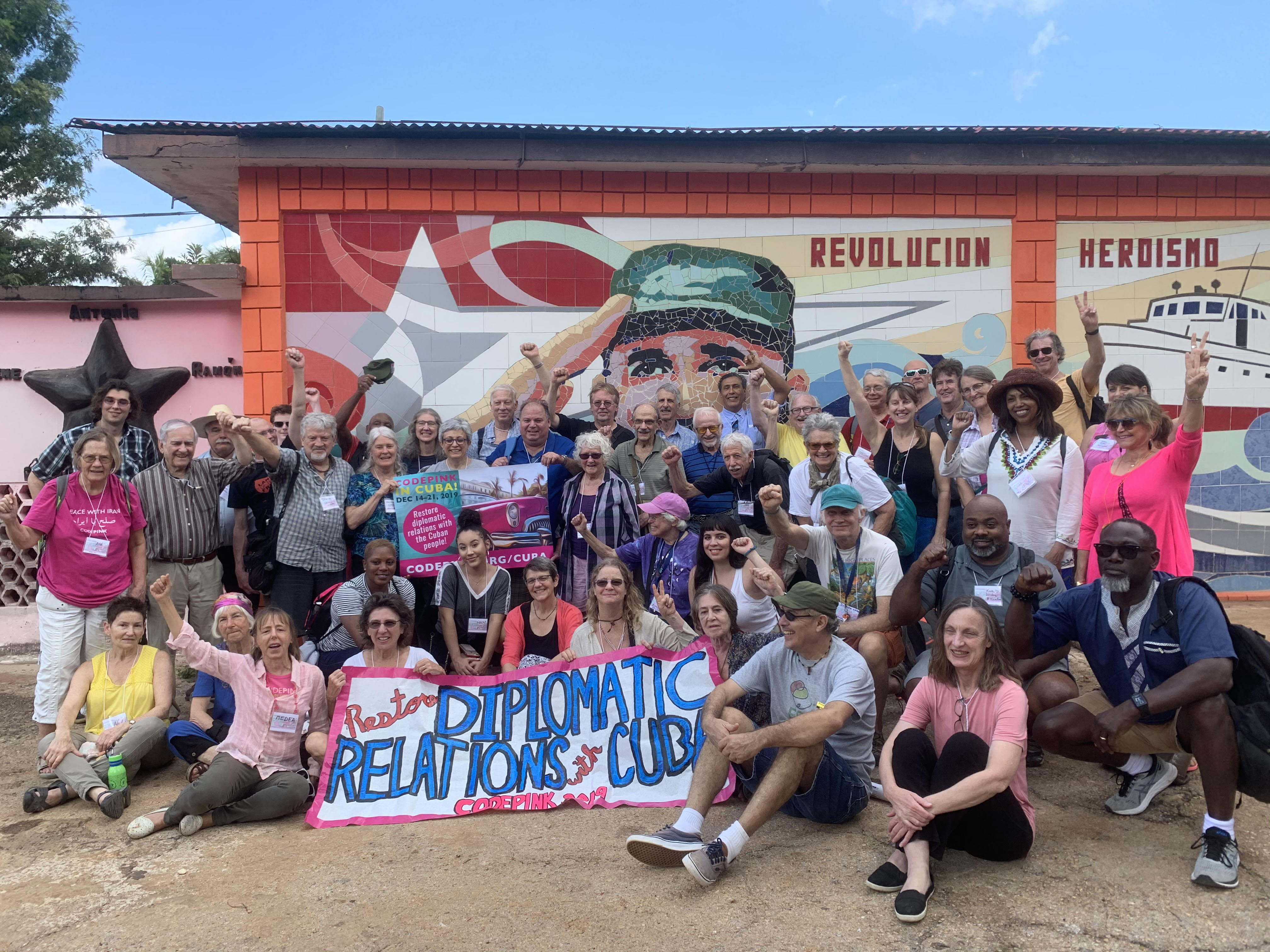 Gloria Minor had been preparing her AirBnB in Havana for years, investing every penny her sister sent her from Miami in repairing and refurbishing her apartment.  With President Obama and Cuban President Raul Castro re-establishing relations five years ago, Minor was sure the expected flood of U.S. visitors would make her business flourish. It did—until Donald Trump came along. Now her business is down 50 percent. “I feel like the bride who prepared everything for the wedding, but the groom ran away and stiffed me,” she said. Our CODEPINK 50-person delegation to Cuba, organized by the Cuba tour group Proximity Cuba, staying in private homes, is hearing similar stories over and over again.

While the U.S. sanctions imposed on Cuba following the 1959 revolution can only be lifted by Congress, Obama had used his executive power to renew diplomatic relations and relax restrictions on travel and trade. The Obamas visited the island to great fanfare, and Cubans were jubilant with the anticipated economic boon. The government opened new hotels and upgraded airports and sea ports, gearing up for a “tsunami” of American visitors coming on newly authorized commercial flights and cruise ships.

The Obama opening coincided with a new Cuban policy of allowing Cubans to leave their low-paid state jobs and obtain licenses to start their own small businesses. Hundreds of thousands became entrepreneurs, many catering to tourists so that they could earn hard currency. Cuba became the fastest growing site for AirBnB. Others invested their life savings, or borrowed money from relatives abroad, to open small restaurants in their homes called paladares.

Donald Trump came in like a bull in a china shop, rolling back Obama’s openings and imposing new punitive measures. While his administration justifies the rollback by citing Cuban human rights violations and Cuba’s support for the Venezuela government, a more likely explanation is that Trump is catering to the conservative Cuban-Americans in Florida, a state that could be decisive in the 2020 election.

Individual travel is now restricted to certain permitted categories. Cruise ships are prohibited from docking in Cuban ports. Commercial flights from the U.S. to Cuban cities other than Havana are banned. The Trump administration has sanctioned nearly 200 Cuban government-run companies and hotels, as well as any company or vessel involved with shipping Venezuelan oil to Cuba. Tougher U.S. sanctions against Cuba have led international banks to avoid transactions involving the island.

In April, Trump also activated Title III of the 1996 Helms-Burton Act, which allows Americans to sue U.S. and international companies profiting from property that was nationalized or confiscated after Cuba’s 1959 Revolution. Previously, every administration had waived this provision, knowing the chaos it would cause. The companies now being sued range from American Airlines to the Spanish Melia Hotel chain. Between Helms-Burton lawsuits and increased U.S. enforcement of sanctions, prospective overseas investors have put plans on hold.

The Trump administration has also targeted another key source of income for Cuba—the doctors it sends to work overseas in poor rural areas that are in dire need of healthcare. The program is a voluntary one for the doctors, but the Cuban government keeps the majority of the salaries paid by the host country, investing the money in Cuba’s education and health care systems. The Trump administration has ferociously attacked this program, encouraging doctors to defect and pushing U.S.-friendly governments not to contract them. When Brazil and Bolivia switched to rightwing governments, they immediately expelled the Cuban doctors, severely cutting into Cuba’s revenues.

Cuba’s Foreign Minister Bruno Rodriguez said the Trump administration does not conceal its intention, which is to
“suffocate Cuba economically and to increase damage, scarcities and hardships on our people.”

Indeed, Trump’s policies are making life harder for Cuba’s 10 million people. “The ‘Trump effect’ has touched every aspect of our lives,” high school teacher Roberta Mejia told me. “Transportation is devastated, as we are functioning on a fraction of the oil we used to have. There is less food and medicines; the hospitals are experiencing all kinds of shortages. And psychologically, we are feeling a tremendous sense of uncertainty, since we don’t know if things will get worse. Our only hope is that the American people will vote for a new president.”

Cubans are angry, resentful and most of all, defiant. “We’ve lived with one form or another of U.S. sanctions since 1960,” a university professor Teresa Oroza told our delegation. “The current crisis is not nearly as severe as the crisis of the 1990s when the Soviet Union collapsed, leaving us with horrible shortages of food, gasoline—everything. It was a nightmare but we lived through it. This, too, shall pass.”

Medea Benjamin is codirector of www.codepink.org and author of three books on Cuba.