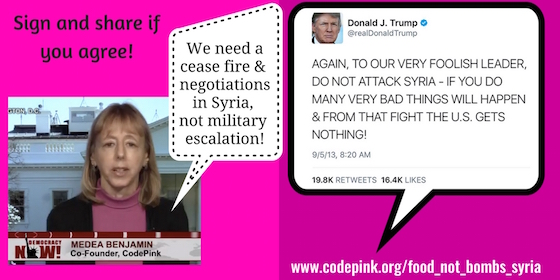 Last night, Trump launched a military strike against the already devastated country of Syria, firing 59 Tomahawk missiles at a Syrian airbase from US warships in the Mediterranean Sea. We know from Bush's illegal bombing of Iraq and Obama's illegal bombing of Libya that this only escalates violence and chaos. The intervention never results in humanitarian relief. The US attack on Syria does not help the Syrian children.

Watch CODEPINK co-founder Medea Benjamin on Democracy Now this morning talking about the need for a ceasefire and negotiations in Syria, not military escalation. Then please sign this petition to Congress and join local protests or start your own. Contact Mariana to find out what is going on in your area or for help organizing a local protest.

Some ways to really help Syrian children would be to lift Trump’s ban on Syrian refugees entering the United States, provide greater financial support for the humanitarian crisis, and fully support the ongoing investigation of the chemical weapons attack and work with the international community to bring the perpetrators to justice. Most importantly, the administration should call for a ceasefire use this tragedy to engage with the whole range of global, regional and Syrian actors (including the unarmed political opposition, civil society and women’s organizations) to find a political solution.

Read from our own Medea Benjamin and Ann Wright why the US should be supporting a ceasefire and negotiation in Syria not military escalation.

To end this war and the 11 others the US is engaged in we need to stop the money and organize locally to build the movement for peace. Sign this message to your member of congress to call for a ceasefire and negotiations. Let us know that you deliver the collection to your member while they are home next week.

We will be continuing to watch closely over the next few days and will keep you informed of work being done to stop the dangerous military escalation in Syria. Contact Mariana for help finding local protests being organized around the country or to start your own protest. We stand with the Syrian people who continue to face such horrific weapons on all sides. We stand with all those who reject calls to “win” this unwinnable war and instead call for an end to the war once and for all.

Help us send a message to the Syrian people that we oppose more attacks against them by sharing the image on the top of the page on Facebook and Twitter.