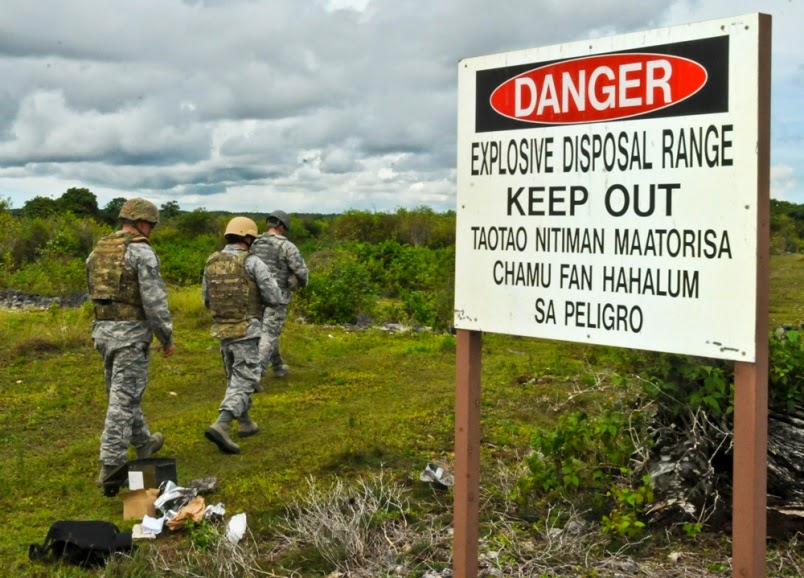 Military waste in the U.S. colony of Guam. The EAGLE Act would fund more militarism in the Western Pacific that will exacerbate the climate crisis by destroying forests, coral reefs, aquifers, and endangered marine life.

(This piece was republished with permission from CounterPunch & LAProgressive)

On May 25th 2021, Representative Greogry Meeks, Chair of the House Foreign Affairs Committee, introduced an expensive anti-China bill into the House. The Ensuring American Global Leadership and Engagement Act (H.R. 3524), also known as the EAGLE Act, would commit our tax dollars to dangerous anti-China rhetoric, as well as wasteful and environmentally damaging military training, and an extra $7 billion of our tax dollars to the Department of Defense.

One crucial area the EAGLE Act fails is its very namesake: by focusing almost exclusively on foreign affairs, the EAGLE Act ignores the United States’ most pressing domestic issues like COVID-19, climate change, poverty, hunger, and inequality. How can America project global leadership when we appear incapable of addressing most of our citizens' most basic needs? U.S. politicians like Gregory Meeks should focus legislation on solving problems in the U.S. before seeking to weigh in on issues in other parts of the world.

Instead, Meeks' promotion of the bill performs classic American Exceptionalism, seeking to address human rights abuse accusations in China while ignoring the very same issues of forced sterilization and forced labor in U.S. prisons, ICE concentration camps that target people for their ethnic origins, and extralegal detention facilities like Guantanamo Bay that have previously detained and interrogated Uyghur Muslims. Beyond that, the EAGLE Act’s rhetoric continues the Sinophobic demonization of China that began under the Trump administration while claiming to rebuke overt racism and the former President.

Democrats have created a position in which they can lament Trump for isolationism and xenophobia while carrying forward many of the very same policies, like the Department of Justice’s “China Initiative,” that create systemic barriers and target, surveil, cast unjustified suspicion on, and criminalize researchers and scientists of Chinese descent, some of whom are American citizens. Several of the resulting prosecutions have been based on false grounds — with devastating consequences for the lives of those affected. Just last month, FBI agents admitted in trial that federal agents falsely accused an internationally-renowned welding technology expert and professor, Dr. Anming Hu, at the University of Tennessee at Knoxville of being a spy, resulting in his professional ruin.

Language in the EAGLE Act consistently distorts context and frames China as manipulative, “coercive,” “repressive,” “hostile,” and bent on world domination. While politicians can claim that they are referring to the Chinese government and not Chinese people, it’s hard to take these claims seriously when their language quickly devolves from a focused critique of another government to a dangerous, racist characterization of an entire culture — one that has existed for over 5,000 years with 56 contemporary ethnicities and a long history of cultural complexity.

While the House was debating the bill, Representative Andy Barr explicitly relied on false and racist characterizations of Chinese culture as a justification for increased U.S. military and legal aggression towards China: “Chinese culture and literature highlights the role of deception and heroes using cunning to manipulate others, concealing true motive, misleading enemies, feigning weakness while hiding growing strength and veiling true intention to the very end.”

Also concerning is that this antagonistic rhetoric and scapegoating extends to Democrats like Representative Tom Malinowski, who stated, “We are all willing to bash China, we are all willing to punish the CCP, those are the easy things, and often that’s what we have to do.” While shocking, Representative Malinowski's comment reflects a common scapegoating tactic used by politicians trying to distract from the real problems facing most Americans during a time of economic crisis.

Just as the events of 9/11 created the conditions of possibility for a deeply political demonization and dehumanization of Arab and Muslim people to manufacture consent for the U.S. wars in Iraq and Afghanistan, we are now seeing the fallout from the COVID-19 pandemic play into politicians' goals to grossly inflate the threat of China as justification for funding more militarism and deployments in the Western Pacfic. In addition to the $7 Billion in funding for the Department of Defense and the $292.5 million in direct military spending for training, the EAGLE Act would increase the need for future military spending by making “regular transfers of defense articles to Taiwan'' a standing U.S. policy, with a specific focus on “anti-ship, coastal defense, anti-armor, and air defense.” This transfer of weapons escalates tensions with China, increasing the chances of conventional combat, nuclear war, and planetary extinction.

Unsurprisingly, a recent study by the University of Delaware found “the racial attitudes of white people also influence their support for American military intervention abroad.” Using racial resentment data gathered over 30 years, researchers found that “racist attitudes are correlated with and meaningfully influence white Americans’ support for U.S. military interventions in other countries,” particularly when it comes to China. Thus, the U.S. government and mainstream media positioning China as an existential threat to Americans is a specific tactic that distracts Americans and offers them a convenient scapegoat that aligns with their Orientalist preconceptions.

This inflated threat of China that is being used as justification for U.S. military aggression is  reinvigorating a violent wave of Anti-Asian threats, attacks, and murders reminiscent of the horrific post-9/11 Islamophobia in the U.S. Anti‐Asian violence has increased 194% in the first quarter of 2021 compared to 2020, according to a report by the Center for the Study of Hate and Extremism. While these two violent trends in American history cannot be perfectly analogized because of their nuance and complexity, they still share some disturbing common themes — namely, the demonization and targeting of ethnic minority and immigrant communities in the U.S. as a precursor to U.S. military aggression towards the countries of origin of those communities.

The EAGLE Act would fund even more anti-China propaganda to manufacture consent for war to the tune of half a billion dollars through the U.S. Agency for Global Media. This includes a minimum of $50 million in funding for Radio Free Asia, which began broadcasting propaganda to mainland China in 1951, and which even the New York Times has described as “an arm of the C.I.A.” Radio Free Asia continues to spread propaganda, speculation, and misinformation to this day and will only increase this output with more government funding. For instance, in April of 2020 Radio Free Asia parroted Donald Trump’s lie that the World Health Organization (WHO) had been co-opted by China in a cartoon entitled “Partners In Deception?” that depicts both China and the WHO arm in arm with a personified coronavirus; this mischaracterization promotes unfounded conspiracy theories that inflate the threat of China by accusing Chinese leaders of purposefully creating and releasing the virus.

But China is not an existential threat to the U.S., and its development as a sovereign nation doesn’t threaten American lives the way police violence, poverty, climate change, and lack of healthcare do. The U.S. ignores these issues while spending more on the military in 2020 than the next 10 countries' military spending combined. When it comes to overseas military bases, China cannot be described as a threat since it has only one foreign military base in Djibouti compared to the nearly 800 overseas U.S. military bases. When it comes to nuclear weapons, the U.S. has more than 4 times as many deployed strategic nuclear warheads than China’s entire nuclear arsenal; China also maintains a “No First Use” nuclear policy that it has followed since it was established in 1964.

As the U.S. draws down troops in Afghanistan, we must not let the U.S. war machine continue to churn out intimidation, displacement, destruction, and death in the Asia-Pacific. The House of Representatives should work to avoid needless conflict with China by cutting international military training and appropriations to the Department of Defense and removing antagonistic anti-China language from the EAGLE Act. The House should replace this aggressive and undiplomatic language filled with racist Yellow Peril connotations that undermine opportunities for cooperation with bold new ways to work together and cooperate on combating the greatest challenges humanity faces.

While the bill does have provisions for addressing climate change, like localized resilience plans and contributions to the Green Climate Fund, these provisions in conjunction with the bill’s provisions for military training funding and arms sales are hypocritical and self-defeating. This hypocrisy proves that the war economy is being prioritized over climate change mitigation by our leaders across the political spectrum. Climate change can’t be addressed with mitigation efforts while we are actively contributing to global greenhouse gas emissions with military activities and exercises, which by their nature include ongoing and increased military occupation of the Asia-Pacific, the destruction of entire islands and endangered ecosystems, military accidents, and chemical spills.

Climate change is the existential threat of our lifetime and a complex problem that no single country can solve alone. As the two biggest economies and polluters, the U.S. and China must work together to develop and share innovative solutions instead of competing in a zero-sum antagonism that threatens our survival by forestalling cooperation as global temperatures continue to rise.

The EAGLE Act not only urges other nations to spend on weapons and munitions but pledges to “cooperate with allies to deliver such munitions… including long-range precision fire, air and missile defense systems, anti-ship cruise missiles, land attack cruise missiles, conventional hypersonic systems.” It is undeniable that the US’s war on China is and will continue to be extremely profitable for politicians who legislate weapons sales to allies in order to “avoid the need for accessing United States stocks in wartime” — that is, unless we can prevent this war from escalating further. Another arms race, this time focused on countering the inflated threat of China, would certainly keep defense and military contractors like Secretary of Defense Lloyd Austin’s former colleagues at Raytheon well paid with our tax dollars, but it won’t solve the vast inequality in U.S. society nor the coming climate catastrophe that will plague U.S. citizens for centuries. If we want to ensure American leadership, then we need politicians who will actually lead us to solutions and not more race-baiting hybrid wars and forever wars that have drained our resources, rained terror on Global South nations and their citizens, and stifled investments into further progress.

👉Urge Congress to Vote No on H.R. 3524, The EAGLE Act by signing our letter here (Both US & non-US signatories welcome)!

RJ Thomsen is a staff writer, organizer, and activist with CODEPINK.
Madison Tang is the coordinator of CODEPINK’s China Is Not Our Enemy campaign.
Jodie Evans is the co-founder of CODEPINK and the after-school writing program 826LA.