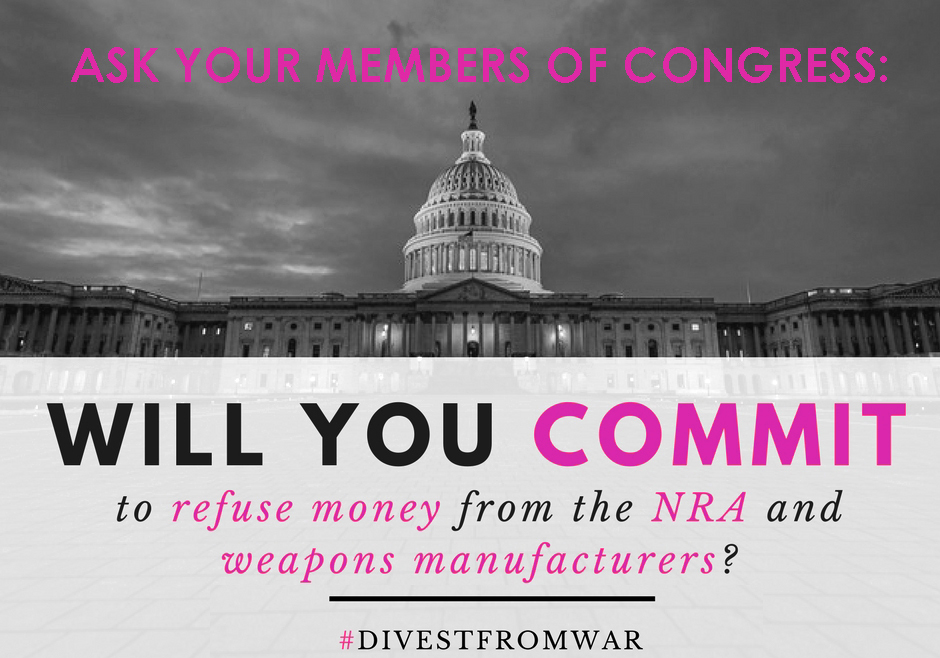 Call and email your Congresspeople

My name is ____________and I am your constituent in zip code _____. Please, if you haven’t done so already, sign the CODEPINK pledge to refuse campaign contributions from the NRA and military contractors. To sign the pledge, contact [email protected] Congress members need to represent us, not lobbyists for the weapons and surveillance industries. In addition, I urge you to publicly call for a 30% reduction in Pres. Biden’s proposed $753 billion military budget and for scrapping plans to produce new nuclear weapons. Thank you.

I was disappointed to learn that you are asking for a $753 billion dollar military spending bill, with upwards of $30 billion for new nuclear weapons and billions more for an unnecessary US Space Force and 800 overseas bases polluting and occupying sovereign countries. Please resubmit a military budget reduced by 30%. Scrap Trump’s Space Force, scale back our overseas bases, and reject the $1.7 trillion plan to build new nuclear land-based missiles and submarines.

You campaigned on a platform that emphasized diplomacy over war and militarism, yet your budget fails to reflect that promise.

Production of new nuclear weapons, at an eventual cost of $1.7 trillion, will escalate the arms race, increase the odds of a catastrophic accident, and risk global annihilation. Should the US pursue this “nuclear modernization” plan, it will be in violation of the Nuclear Non-Proliferation Treaty (NPT) that requires nuclear nations to pursue nuclear disarmament. No money for new nuclear weapons!

Additionally, the US Space Force, estimated to cost at least $15 billion total, will only serve to escalate the arms race at a time when both Russia and China are calling for talks with the US to limit arms in space.

Finally, at a time when your administration is undertaking a review of our global posture, it behooves all of us to call for scaling back hundreds of overseas bases that occupy and pollute foreign lands.