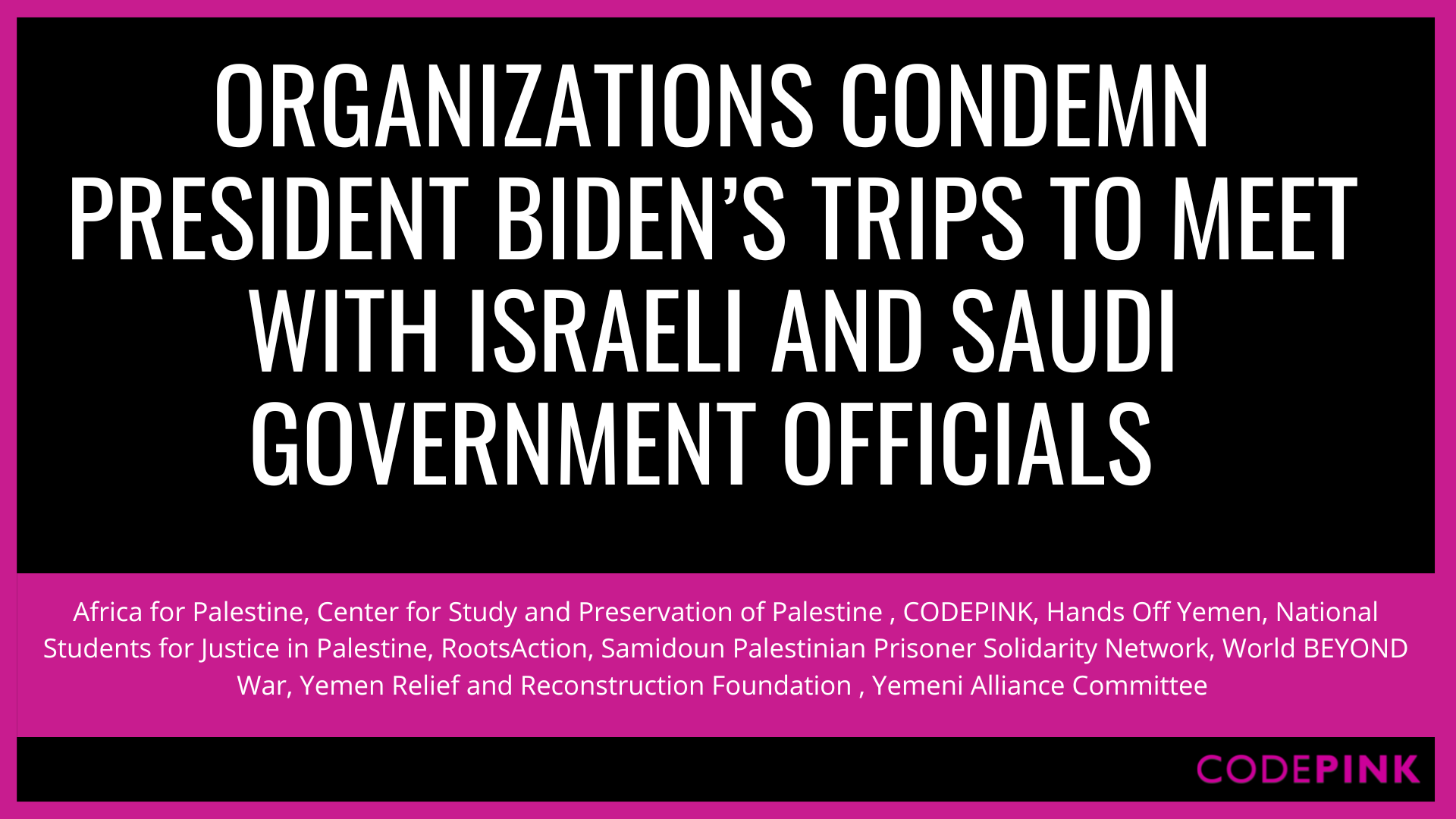 July 13, 2022 - We, as organizations representing thousands of people all over the world, condemn President Biden’s trips to Saudi Arabia and the Israeli Occupation State. These trips serve to normalize relations with a military occupation that recently murdered Palestinian journalist Shireen Abu Akleh and the government of Saudi Arabia that ordered the murder of Jamal Khashoggi.

Visiting the Kingdom of Saudi Arabia and meeting with Crown Prince Mohammed bin Salman goes against Biden’s promises to make Saudi Arabia a “pariah” after the murder of the journalist Jamal Khashoggi. Currently, despite a month-long ceasefire, MBS continues to wage his war on the people of Yemen. Over 350,000 Yemenis have been killed and two-thirds are the result of the Saudi-UAE led coalition. The Saudi-UAE led coalition are using U.S.  manufactured bombs to continue their seven-year assault on Yemen. We need to stop all arm sales to the Saudi-UAE led coalition immediately. Moreover, the blockade that cuts Yemen off from the land, air, and sea is still in place although the ceasefire agreement required Saudi Arabia to allow certain flights into Sana’a, Yemen’s capital city. The blockade still restricts fuel from getting into Yemen which restricts access to food in most rural areas, leading to starvation and malnutrition for Yemen’s most vulnerable populations. The blockade and war on Yemen is in direct violation of Yemen’s right to sovereignty and President Biden’s decision to meet with a leader carrying out a genocidal war on a neighboring country and who ordered the murder of a journalist is reprehensible. Just days before his trip began, Biden published an op-ed in The Washington Post, the outlet Jamal Khashoggi worked for, to justify his trip to Saudi Arabia.

President Biden also plans on meeting with Israeli officials. The United Nations human rights office and many other sources have found that it was the Israeli Occupation Forces that shot and killed journalist Palesinian journalist Shireen Abu Akleh. Shireen, who had U.S. citizenship and consistenly brought light to the realities of Zionism and occupation, was murdered in broad daylight by military forces. We also see Shireen’s murder as the natural outcome of Zionism which is a violent project that kills and harms Palestinians every day. Only violent ideologies can be harmed by truth tellers like Shireen, and her existence as well as other forms of resistance to the occupation of Palestine brings the world closer to justice. While Biden’s trip to the Israeli Occupation State is unsurprising, given the massive amount of material support the United States provides to the occupation forces unconditionally, the consistent denial by the administration of who is at fault for Shireen’s murder speaks volumes about what this administration represents.

We stand firmly against the occupation of Palestine, the blockade and war on Yemen, as well as  Saudi Arabia and Israel’s Occupation Forces blatant attacks on free press. We condemn the Biden administration’s ongoing collaboration with two of the most egregious sponsors of state violence in the world. With this visit, this administration has once again demonstrated its commitment to US military and economic dominance over all other objectives.

Center for Study and Preservation of Palestine

National Students for Justice in Palestine