For over 13 years CODEPINK has worked to end US war and militarized aggression throughout the world. From Palestine to Syria, Mexico to Yemen we have recognized that US funding of occupation and weaponization has resulted in continued oppression and contributed to increased violence globally.  In that time we have been in a state of constant war and uncertainty. More and more we are seeing the weapons of occupation finding their way into our communities right here in the US. As a result of the failed 'drug wars' and hysteria in no small part fueled by FBI-organized cases of entrapment of so-called 'terrorists', we have witnessed the militarization of our local police departments with 'excess equipment' and funding from the Department of Defense and the Department of Homeland Security. 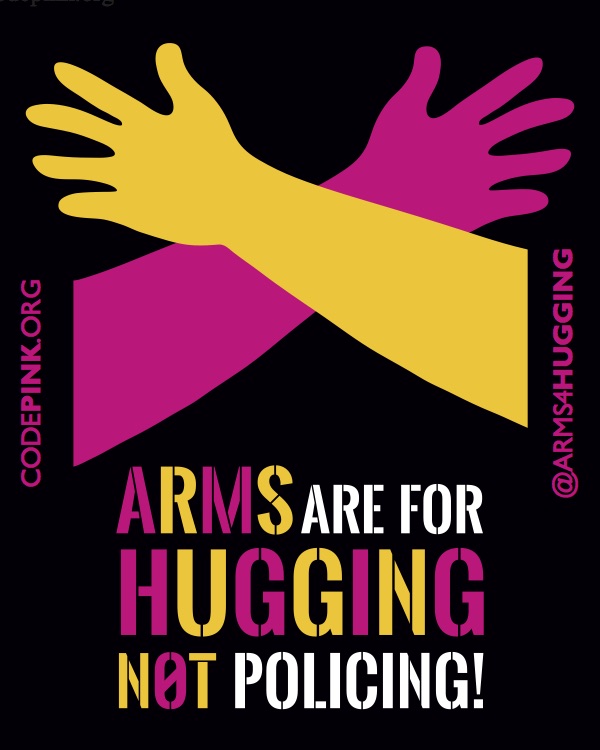 Through Department of Defense Programs 1033 and 1122 of the National Defense Authorization Act (NDAA), and Homeland Securities 'Urban Areas Securities Initiative (UASI)' local police departments have become increasingly militarized both in equipment and tactics.  In his detailed history of militarized policing "Rise of The Warrior Cop" Radley Bilko writes that "Today in America SWAT teams violently smash into private homes more than one hundred times per day. The vast majority of these raids are to enforce laws against consensual crimes.  In many cities, police departments have given up the traditional blue uniform for "battle dress uniforms" modeled after soldier attire".

In cities across the United States we have seen how this militarized mold of policing and the supply of armored vehicles, assault weapons and the like have resulted in police forces who no longer see their role as one of protecting and serving, but as an opposing army occupying towns and cities across the continent.

Through our campaign to support Communities Ogranizing to Demilitarize Enforcement we will seek to:

- End the 1033 program and other federal programs that equip police departments with military weapons, machinery, and gear.

- Create effective civilian review, with subpoena power, of all shootings and allegations of misconduct by police.

- Hold Police forces accountable to the Death in Custody Reporting Act; while working to include reporting on all injuries occurred in the process of arrest or while in custody.

- Advocate for increased funding for the DOJ's Office for Civil Rights to ensure additional, accessible state-level responders for police and other civil rights violations.

- Establish a comprehensive national database of police shootings, excessive force, misconduct complaints, traffic & pedestrian stops and arrests, broken down by race, religion, gender identity and other demographic data to be organized and overseen by the US Department of Justice and made publicly available.

- Build support for the passage of the End Racial Profiling Act (ERPA).