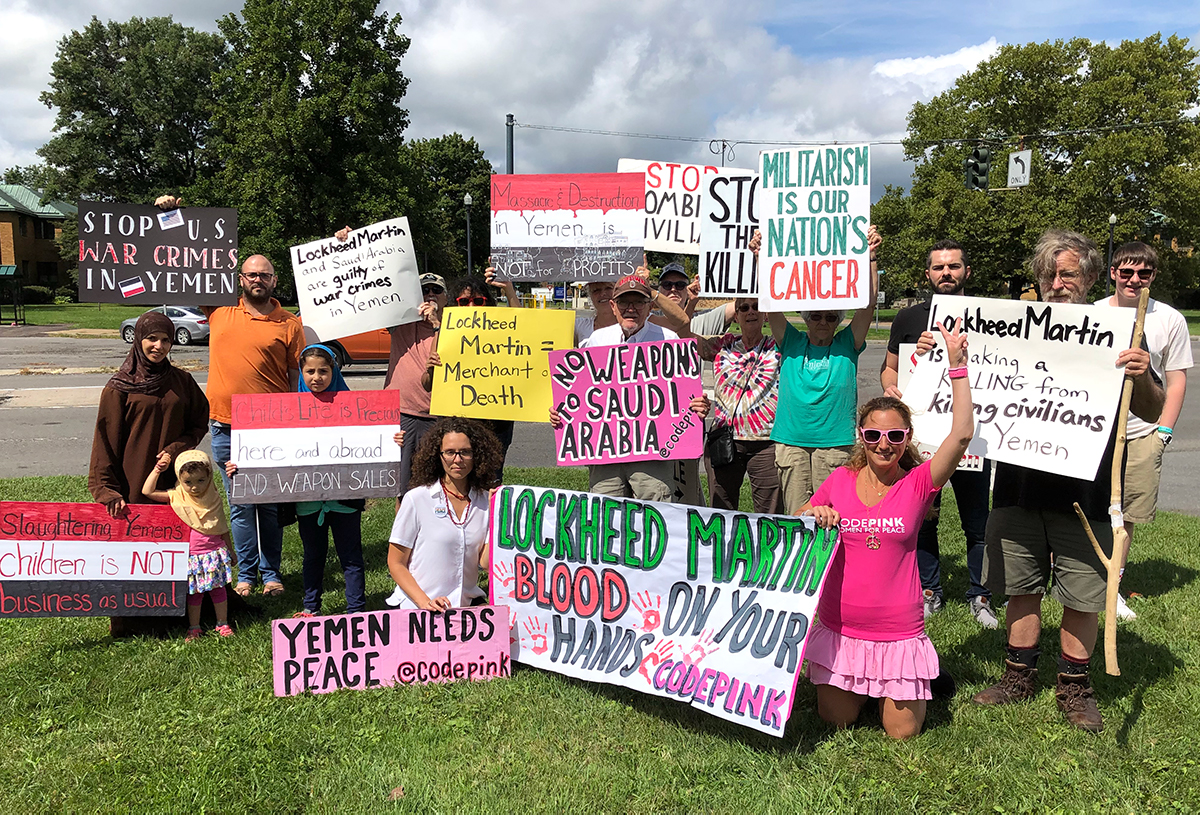 Summer is coming to an end, but it has been anything but a slow, laid-back season for us at CODEPINK. While US bombs continue to blow up children in the Middle East, refugees continue to risk their lives to find safe haven, and our elected officials continue to hand over billions of our tax dollars to the merchants of death (i.e. the weapons makers), we at CODEPINK have been busy educating, mobilizing, and strategizing.

Here’s a taste of our sizzling summer activities…

Victory! No Military Parade!: We fought Trump’s military parade with a coalition of over 200 groups—and we won! The parade has been canceled but we’re moving forward with peace activities to celebrate Armistice Day the weekend of November 10-11, as well as joining the Women’s March on the Pentagon on October 20-21. So join us in DC! If you want to stay at our DC activist house, contact [email protected].

Israel can’t keep us away from Palestine: Our Director Ariel Gold tried to go to Israel but was detained at the airport and deported. Her expulsion made national news in Israel and the United States, from the Knesset to The New York Times. And she came back with so much vigor to support Palestinian rights that she immediately started a new campaign. Our new Stop Elbit campaign calls for boycott and divestment from Israeli weapons giant Elbit Systems. Elbit is not only responsible for deaths in Gaza and repression on Israel’s apartheid wall, but they even have contracts with the U.S. Department of Homeland Security. Yuck!

A contingent of CODEPINKers spent a good part of their summer with the Gaza Freedom Flotilla. They traveled with the boats from port to port across Europe—educating people along the way about the horrendous conditions in Gaza, collecting medical supplies to send on the boats, and then helping get the passengers on the flotilla released from Israeli prisons after the boats were hijacked by the Israeli defense forces in international waters.

Stopping a new war with Iran: Medea spent the summer on tour with her new book Inside Iran: The Real History and Politics of the Islamic Republic, traveling from Chico, California to Redwing, Minnesota to the Veterans for Peace convention. Here’s a sample of her interviews and writing this summer: The Progressive, The Iranian, TruthDig, National Public Radio and The Thom Hartmann Show. We’re excited that we have just hired an Iran coordinator, Lily Tajadinni, and our dear CODEPINK advisor Leila Zand is in Iran right now laying the groundwork for a Peace Delegation to Iran in November. If you are interested in joining, contact [email protected].

New energy for divesting from war and building a peace economy: We spent the summer working with activists all over the country who are taking action locally to #Divest from the war machine. From city campaigns to personal divestment, our Divest from the War Machine campaign is giving individuals the tools to sever their complicity with the global military industrial complex. With our friends at As You Sow, we launched the web tool weaponfreefunds.org, a massive searchable database that shows exactly which of your investments are propping up war and weapons so that you can move that money into life-affirming solutions instead. Look for more #Divest campaigns nationwide coming this fall, and email [email protected] to join our Divest from the War Machine team!

BlackRock’s investments are making a killing on killing. This summer we took on the Wall Street investment firm BlackRock, calling on them to divest from war. BlackRock is the largest investors in weapon manufacturers: Boeing, General Dynamics, Northrop Grumman, Lockheed Martin, and Raytheon. We spent the summer mailing postcards to BlackRock CEO Larry Fink’s house and confronting BlackRock execs at their offices across the globe. In November, we’ll be outside the International Rescue Committee’s gala asking them to rescind their humanitarian award to Larry Fink. Sign the petition asking the IRC to rescind their award to Larry Fink.

Spotlighting Saudi atrocities in Yemen and internally: We have been badgering Congress to stop supporting the Saudi-led bombing, especially after the horrific August 9 bombing of Yemeni schoolchildren. We organized human rights groups to speak out against the jailing of Saudi women activists and the death sentence hanging over the head of Israa al-Ghomgham, and encouraged Congress to take action. We sponsored a photo exhibit on the Yemen war in the heart of Congress, the atrium of the Senate Russell building, and will now take it to communities around the country. Let us know if you are interested by contacting [email protected].

Standing up for refugees and immigrants: Veteran CODEPINK campaigner Nancy Mancias used her “summer break” to travel to Greece to work with the thousands of refugees still stranded in Lesbos, as well as Athens. CODEPINK donations of socks were well appreciated, and now we will are collecting boxer shorts (Boxers not Bombs) for Nancy’s return in December.

CODEPINK also joined a caravan called Grannies Respond, visiting the Texas border to stop our government from snatching children from their parents. We made up backpacks with vital supplies for refugees, went into Mexico to meet with families seeking refuge and forged relations with immigrant support organizations along the border.

Educating and inspiring for action: Thousands of you have viewed our fascinating summertime facebook educational seminars on Russia, North Korea, the peace economy, Iran, Yemen, and Palestine. If you haven’t had a chance to see them, check them out now on our YouTube channel.

Jodie gave seminars on the peace economy. Alice Slater wrote a piece in The Hill on the lunacy of Trump’s new ideas for weaponizing space. Stacy Bannerman wrote for Alternet about how the women’s movement is missing vital anti-war messaging. Ariel wrote for the Forward about Israeli entry policy. Medea was on Democracy Now about John McCain’s support for war; she also received the Martín-Baró Peace Practitioner Award from the American Psychological Association.

So it has been a sizzling summer, and we are going into the fall with spunk and energy. As Congress comes back to Washington, we will greet them with determination, passion, and conviction that we must learn to live in peace.