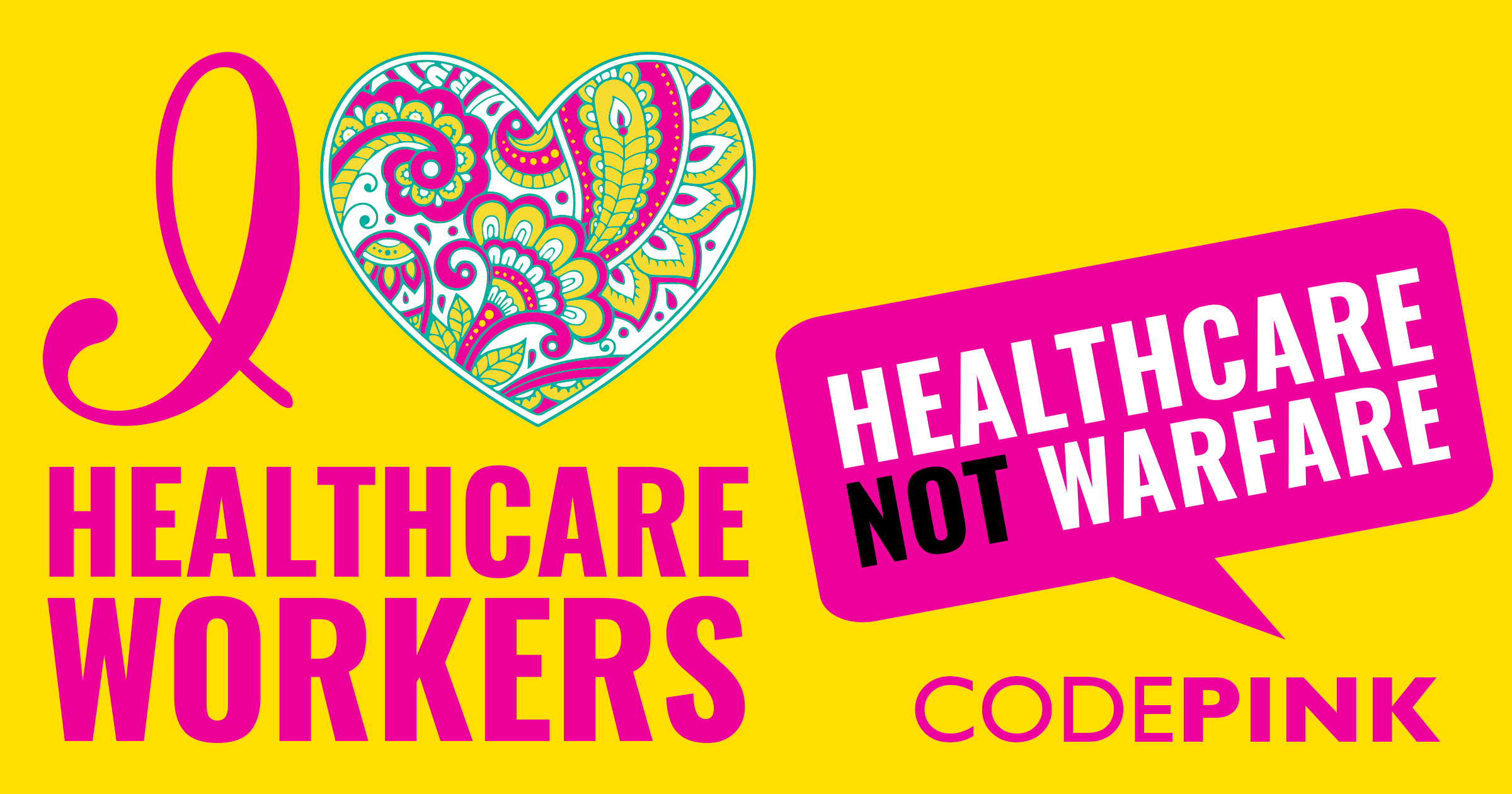 Since our beginnings almost 20 years ago, CODEPINK has been using the slogan “Healthcare Not Warfare.” Never before has that rallying cry been more critical than today, as we face a health crisis of epic proportions.

Facing this terrifying pandemic, we see the hollowness of our national defense preparedness and the havoc we have wrecked across the world. The world’s superpower is not capable of furnishing its people with enough protective masks, much less ventilators and hospital beds, and we hear our president saying it would be a great success if “only” 100,000 Americans die from COVID-19.

No wonder we’ve come to this tragedy so utterly unprepared. We lavish $740 billion on the Pentagon but leave crumbs, $11 billion, for the Center for Disease Control. We have 1.3 million active-duty troops, with another 865,000 in reserve, but not enough doctors and nurses. Imagine if instead we had a cadre of medical professionals, ready to descend on New York, New Orleans and the dozens of other cities and towns overwhelmed with the virus to do home visits for those who might be sick. Imagine if instead of dropping bombs and sanctioning other countries, we were sharing medical and other resources. We have a socialized military--paid for with our taxes--that has enough money to engage in endless wars, but we are told that socialized healthcare is a fantasy.

While we are in dire straits to support our healthcare workers, millions are losing their jobs at an alarming rate, however, the deadly arms industry has not come to a halt. The CEO of Lockheed Martin, Marilyn Hewson, has guaranteed delivery of its weapons to arms purchasers, during the crisis. Boeing is set to receive billions from the latest stimulus package. The company is more commonly known for its airplanes, but it also makes fighter planes and tanks. Even though arms industry stocks had bottomed out on the market, the industry still turns a profit because they are deemed essential. Undersecretary of Defense passed a memo which excludes the defense industry from following stay-at-home orders passed in most states. The memo gives the defense industry preferential treatment to operate business as usual, which in turn creates a dilemma for workers in the industry who are put at risk of catching the virus. The defense industry is built on a system that creates weapons of war and turns a profit for its CEOs and shareholders.
In confronting COVID-19, we are inspired by the words of UN Secretary General Antonio Guterres. Recognizing the need for unity in confronting our common enemy, COVID-19, the Secretary General made a plea for a global ceasefire. “The fury of the virus illustrates the folly of war,” Guterres said. “It is time to put armed conflict on lockdown and focus together on the true fight of our lives.” He told the warring parties to pull back from hostilities, silence their guns, stop the artillery and end the airstrikes. The Pope has echoed this call and by March 31, 53 nations had signed on. The UN has also called for an end to economic sanctions that are making this virus even more deadly.

Ending armed conflict and suspending sanctions will allow humanitarian aid to reach vulnerable populations. It will reduce the number of injured people in need of medical attention when medical facilities are overwhelmed with COVID-19 patients. It will prevent the further destruction of hospitals, clinics and critical infrastructure such as sewage and water in countries now in the midst of conflict.

This message of ending wars and sanctions should resonate deeply with the American people. As we sit quarantined in our homes (if we are lucky enough to have one), this should be a time for deep reflection. Look at the people on the frontlines today who we must thank for their service. They are not soldiers. They are healers and caregivers. They are also farmers, clerks, pharmacists, cleaning staff, garbage collectors, USPS and UPS employees, and so many more.

If this virus has taught us anything, it is that our common enemy is not each other. On the contrary. We need each other to protect the wellbeing of our families, our communities and our planet.

What if, instead of making bombs and nuclear weapons, our country made coronavirus testing kits and treatments, and invested in non-profit vaccine development. Instead of selling the bombs that kill Yemenis, sentencing Iranians to death through sanctions, occupying Iraq, and supporting the siege of Gaza, what if our government—emulating the tiny island of Cuba—sent doctors and medical equipment to all who asked, even our supposed enemies. That would do more for national security than any act of war.

The notion that we are secure because we have the largest, mightiest, most costly military the world has ever known is a myth that is now exposed to all. The bloated military budget demonstrates the folly of that myth and invites us to demand deep, structural change. We, the people, know what creates security and we can begin with the demand for universal healthcare and universal disarmament.

Instead of moving towards more inequality, greed, authoritarianism, militarism or xenophobia, we can and must move in the opposite direction. We must prioritize caring, sharing, compassion, and our common survival. We must demand that our government stop investing in the madness of war and invest in the goods and services that sustain and nourish life at home and across the world. Healthcare Not Warfare must move from slogan to reality.