CODEPINK says NO to settlement profiteering 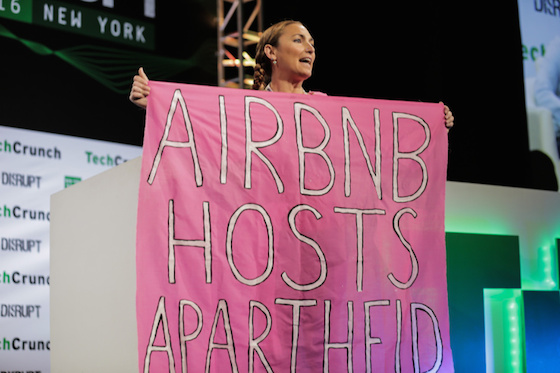 No Airbnb in Stolen Homes! No Open House on Stolen Land!

CODEPINK has been busy this week making sure companies do not get away with occupation profiteering. Within the span of a week, we protested both RE/MAX’s selling of homes in illegal Israeli settlements and Airbnb’s listing of rentals in the same illegal settlements.

Last Thursday, RE/MAX LLC held their annual shareholder meeting in Denver, Colorado, where their corporate headquarters are located. While local activists protested outside, our own Ariel Gold and Dalit Baum of the American Friends Service Committee attended the meeting to support a shareholder resolution being brought by the Heartland Institute calling on RE/MAX to form an ad-hoc committee to investigate their business in the settlements. While three police escorted Ariel and Dalit into the meeting, the rest of the security scoured the protest crowd for any sign of CODEPINK co-founder, Jodie Evans, who after years of effective nonviolent activism, RE/MAX has come to fear. 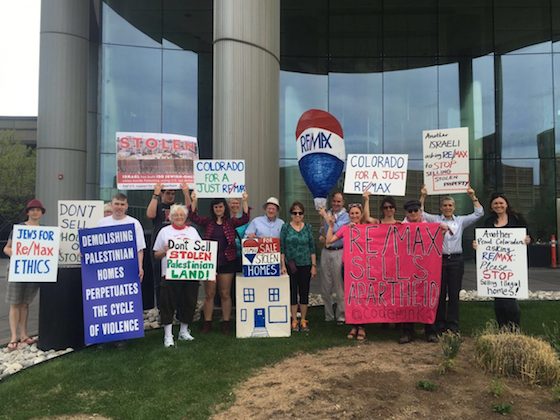 Following up on the success of the RE/MAX action, CODEPINK and the rest of the Stolen Homes coalition showed up in Brooklyn for Tech Crunch Disrupt where Airbnb board member Alfred Lin was speaking. While members of the Stolen Homes coalition protested outside, Ariel took to the stage during Lin’s talk with a banner reading Airbnb Hosts Apartheid @CODEPINK. Ariel told Lin that Airbnb must stop listing homes in Israeli settlements in violation of international law. Ariel was arrested and charged with trespassing. As the police were arresting her, Ariel told them that she hoped her action that morning would be helpful in convincing Airbnb to stop contributing to Israeli human rights abuses.

As Jodie Evans says, "People around the world are waking up to the immorality of settlement profiteering.” We know that with efforts such as those we have carried out over the last week, and with your support, it will not be long before Airbnb and RE/MAX stop doing business in the occupied West Bank and East Jerusalem.

Toward peace, justice, and equality for all people,