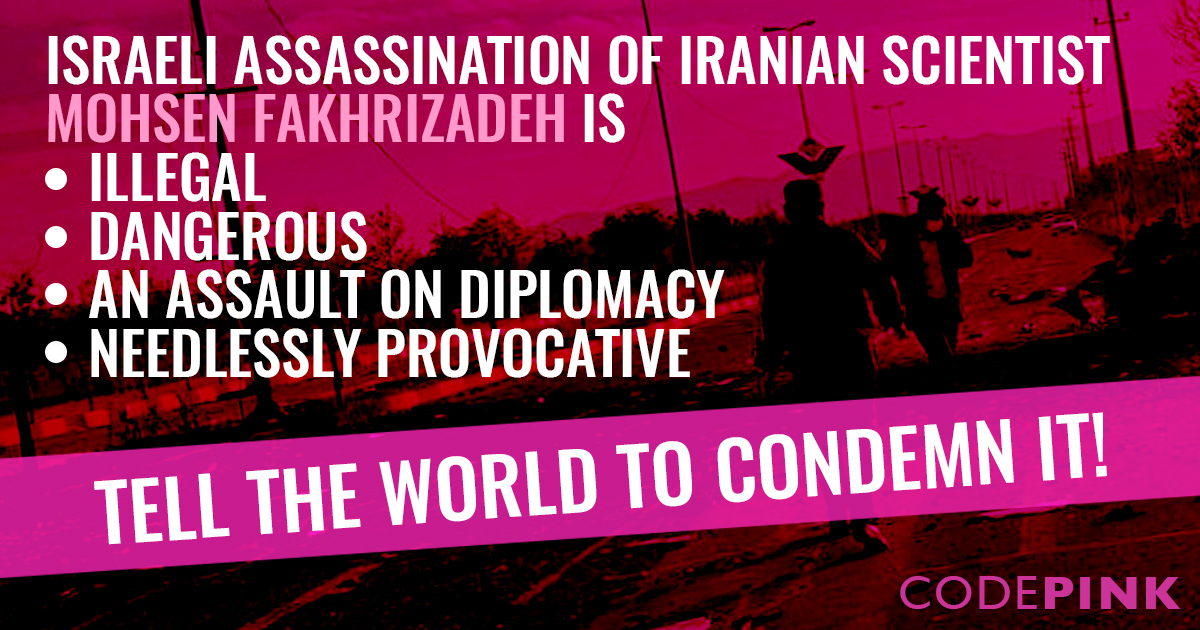 Friday, November 27, 2020 — CODEPINK calls on world leaders, including U.S. President-elect Joe Biden, to condemn the illegal execution of Iranian nuclear scientist Mohsen Fakhrizadeh. Fakhrizadeh was assassinated in the city of Absard outside of Tehran, Iran by a bombing attack followed by a gunfight. Intelligence officials have reported that the assassination was carried out by Israel, and this was perhaps with the support of the Iranian terrorist group The People's Mujahedin Organization of Iran (MEK).

In 2018 Israeli Prime Minister Benjamin Netanyahu identified Fakhrizadeh as a target of his administration. This is in line with past Israeli assassinations of Iranian nuclear scientists. It also follows reports that the Israeli government recently instructed its senior military officials to prepare for a possible U.S. strike on Iran and reports of a meeting last week between Netanyahu and Saudi ruler Mohammed bin Salman where the two leaders discussed their mutual conflict with Iran.

If the attack was facilitated or jointly coordinated with the Trump administration, such involvement must be condemned as further evidence that Trump, Secretary of State Mike Pompeo, Special Envoy Elliott Abrams, and other members of the outgoing administration are doing everything in their power to prevent the incoming Biden administration from succeeding at diplomacy with Iran.

“From additional crippling sanctions to threats of bombing Iran’s nuclear facilities to the likely involvement in the murder of this nuclear scientist, the Trump administration’s last days are proving to be among the most dangerous in U.S.-Iran relations,” said Medea Benjamin, CODEPINK co-founder and author of the book Inside Iran. “Whether Iran retaliates immediately in retaliation or waits, the assassination of Fakhrizadeh deals a heavy blow to Biden’s chances for successful diplomacy with Iran. This was likely the precise intention of U.S. and Israeli leaders.”

“Israel is trying to goad Iran into a war down to the last American soldier,” said CODEPINK national co-director Ariel Gold. “This dangerous assassination of Fakhrizadeh, committed by Israel, puts the entire Middle East and the whole world at risk. Israel’s actions to goad Iran into a war over its nuclear activities are particularly ironic given that Israel, not Iran, is the only country in the Middle East in possession of nuclear weapons and given that Israel refuses to sign the International Treaty on the Non-Proliferation of Nuclear Weapons. World leaders committed to diplomacy and avoiding a new Middle East war, including President-elect Joe Biden, must publicly condemn this illegal act.”