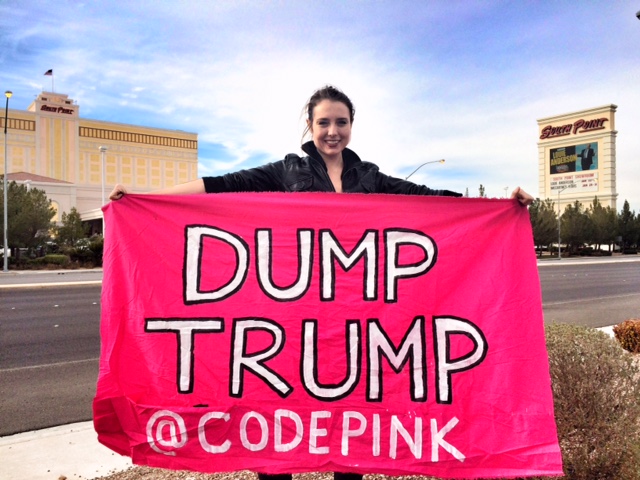 Las Vegas, Nevada –– Member of the peace group CODEPINK Chelsea Byers disrupted Republican Presidential candidate Donald Trump's rally at the South Point Resort & Casino in Las Vegas, Nevada today to spread a message that hateful, xenophobic language has no place in mainstream political debate. Displaying a banner that read "Stop Hate: Dump Trump!" the CODEPINK protester challenge rally attendees to see that hateful, racist and misogynistic attitudes are not the answer to the problems that face our nation, but instead only lead to violence, war and needless deaths.

“What Trump is doing is an affront to human decency and a threat to our democracy.” said Chelsea Byers, a CODEPINK Campaign Director and the activist who disrupted Trump during his speech. “His hateful words against Muslims are insidious and the manifestation of those words will be aggression, violence, and ultimately war.”

“It feels like a nightmare. Someone who is supposed to be representing American values as a presidential candidate is instead instilling fear, division and hatred to a disgusting degree,” said Michaela Anang, a CODEPINK youth organizer. “We cannot tolerate this anymore; it’s time to wake up and speak out.

CODEPINK, a women-led grassroots organization working to end U.S. wars and militarism, is part of the Stop Hate, Dump Trump coalition, a diverse, broad ranging group of organizations and individuals standing up to end hatred, fear-mongering, racism and bullying in American politics.

Bigoted statements Trump has made have only served to further inflame Islamophobic and anti-immigrant tensions. His hate-filled rhetoric is a verbally violent tool of oppression that works to alienate peace-loving Muslims and hard working immigrants across the country.

In addition to attacking Muslims and immigrants with his hate speech, Trump has displayed a disturbing level of misogyny, implying that he believes military rape is inevitable and making crass statements about the menstrual cycles of women who dare to challenge him.

“Trump’s hate has crossed the line and much of the media has elevated his remarks to gain audience, which encourages his competition to do the same. Hate is real, just as war is real. Hate leads to war. This is not a video game,” said CODEPINK Co-Founder Jodie Evans. “Those who don’t stand up to stop it are responsible for the outcomes.”