San Francisco Bay Area CODEPINK participated in the international day of action for climate justice on November 30, 2009, which targeted Bank of America.

Deborah Kearns, with CODEPINK from San Francisco, who was one of the 22 who was arrested, said, "It's become personally painful for me to be silent when I see young people killed, maimed, psychologically destroyed by war in Iraq and Afghanistan, wars that are largely caused by our dependence on oil.  I also feel global warming is moving towards something irreversible. The time is now to act to make important change. I want to make an impression on our leaders pre-Copenhagen.  What Obama has suggested is like using teaspoons to put out a firestorm!"

Betsy Rose, with CODEPINK from Berkeley, CA, blocked a doorway to Bank of America for over an hour and was not arrested.  She said,  "I'm willing to go to great lengths to do what our leaders don't seem willing to do which is take climate change the number one issue of our time, it's a moral issue. War is part of the machinery that protects corporate interests and corporate interests don't want to change their practices despite the peril we're in."

Janine Boneparth, with CODEPINK from Ross, CA, said, "Bank of America is the third largest financier of oil and gas industry world-wide.  What B of A is doing is unacceptable and can't continue!  Many Americans remember protesting Bank of America when they were backing apartheid government in South Africa.  Now it's time again to protest." 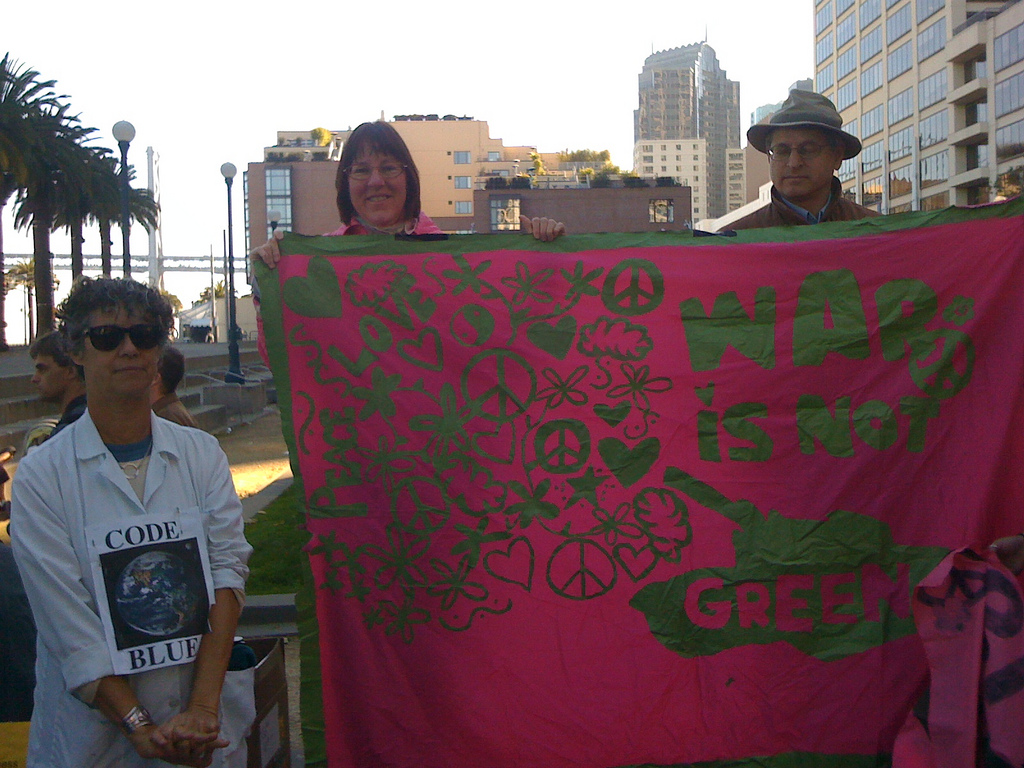 Kayla Starr, with CODEPINK from Berkeley, CA, was also among the contingent of CODEPINKers risking arrest.

The following is from www.actforclimatejustice.org:

Today on the Global Day of Climate Justice Action, a rowdy march in San Francisco made it’s way to Bank of America’s skyscraper (the tallest building in San Francisco), where dozens of activists blockaded the doors all around the building. Over 200 marched and rallied with at least 22 being arrested in the blockade.

Some locked themselves within the revolving doors to disrupt Bank of America’s business for the day. Bank of America is one of the largest funders of coal plants, oil and gas in the country. They also play a leading role within trade associations pushing for cap and trade.

“The world’s largest corporations are blocking an agreement to address the climate crisis that is endangering our common future,” stated organizer David Solnit. “Meanwhile, Bank of America profits from financing dirty energy and carbon trading schemes that subsidize pollution and poverty.” According to Bloomberg, Bank of America is the third largest financier of oil, gas, and coal in the world, and is heavily involved in financing mountaintop removal coal mining.

The Mobilization blames these corporations for contributing to the climate crisis and promoting false solutions such as carbon trading, “clean coal”, nuclear energy and bio-fuels. Through direct lobbying, and support of lobbying institutions like the Chambers of Commerce and the US Climate Action Partnership, these

This protest marks the 10th anniversary of the massive mobilization in Seattle that effectively derailed the corporate agenda driving the World Trade Organization’s trade liberalization policies. “We cannot allow the world’s largest corporate polluters to continue robbing our children’s future,” stated Carla Perez of Movement Generation, marching with a parade of children and the Raging Grannies carrying clean up equipment. “US corporations have been holding climate solutions hostage, while burdening our communities with ongoing attacks on our health and livelihoods.”

Protesters demand that Bank of America and the other corporations stop polluting the climate and promoting false solutions at the UN and in the halls of Congress.