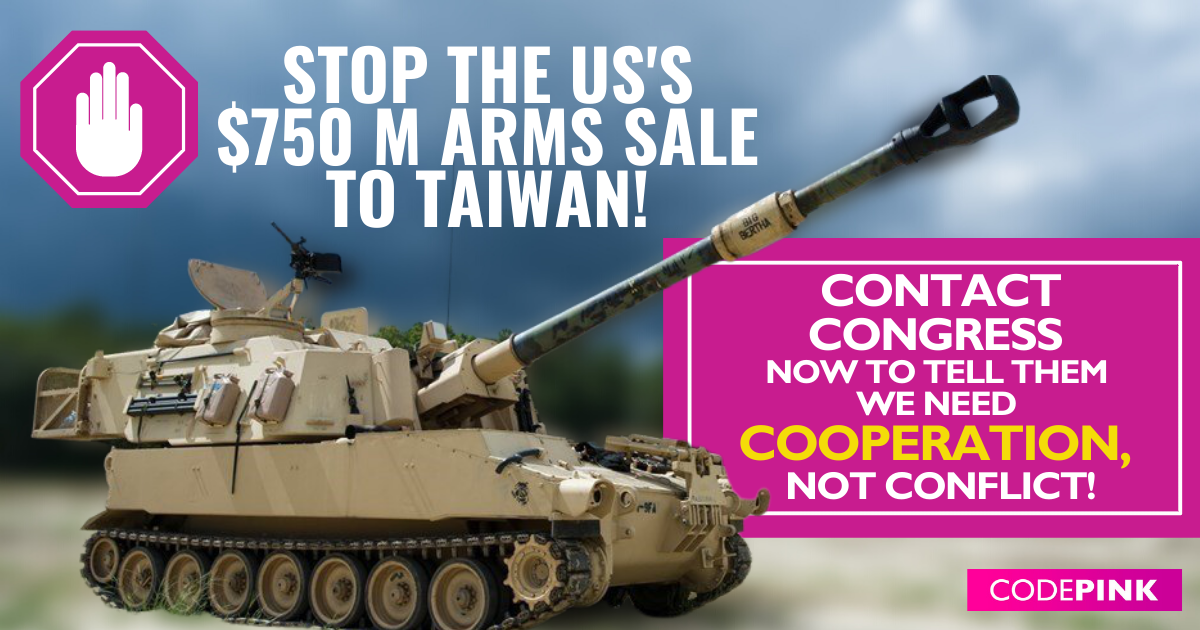 The letter, with over 3,000 signatures, urges Congress to block the sale of $750 million dollars worth of weapons to Taiwan. The sale would include 40 M109A6 self-propelled howitzer systems, 5 M2 Chrysler Mount armored vehicles with .50-caliber machine guns, nearly 1,700 kits to enable GPS-guided munitions, and other assorted weapons systems. The deal would also include U.S. Government technical, engineering, and program support services. These services are part of a trend of U.S. personnel and experts becoming embedded in the maintenance and infrastructure of Taiwan’s military, not unlike U.S. maintenance of Afghanistan’s military. Not only is this sale in direct violation of China’s sovereignty and previous agreements between the U.S. and China, it also will exacerbate climate change through military pollution and increase the risk of kinetic and nuclear war between the nations.

Jodie Evans, CODEPINK co-founder, says, “In the fallout of the U.S.’s catastrophic intervention and war in Afghanistan, it should be clear that U.S. military intervention in other nations’ internal affairs only results in more death, destruction, human rights crises, climate devastation, and blowback. This massive arms sale to Taiwan will only exacerbate the regional tensions and increase the potential for another U.S. ‘forever war’ — this time between the U.S. and China.”

China’s Foreign Ministry says the proposed arm sale sends the wrong signals to the “Taiwan independence” separatist forces, seriously damages Sino-US relations, and threatens peace and stability across the Taiwan Strait. We know that any extended combat between Taiwan and China risks the destruction of the island entirely, endangering the more than 23 million people who live in Taiwan and on its surrounding islands. Since the U.S. has pledged to defend Taiwan, this kind of conflict could quickly evolve into a U.S.-China nuclear war that would threaten all life on Earth.

“Adding $750 million worth of sophisticated weapons and contractor services to Taiwan’s military arsenal will ultimately not make Taiwan safer; instead, it will increase the risk of Taiwan’s destruction and the likelihood that the U.S. will intervene on Taiwan’s behalf in a global, potentially nuclear conflict. History — including and especially the U.S.’s disastrous involvement in Afghanistan — has proven that the U.S. acting as the world’s arms dealer does far more harm than good for all parties involved,” says Madison Tang, coordinator of the CODEPINK China Is Not Our Enemy campaign. 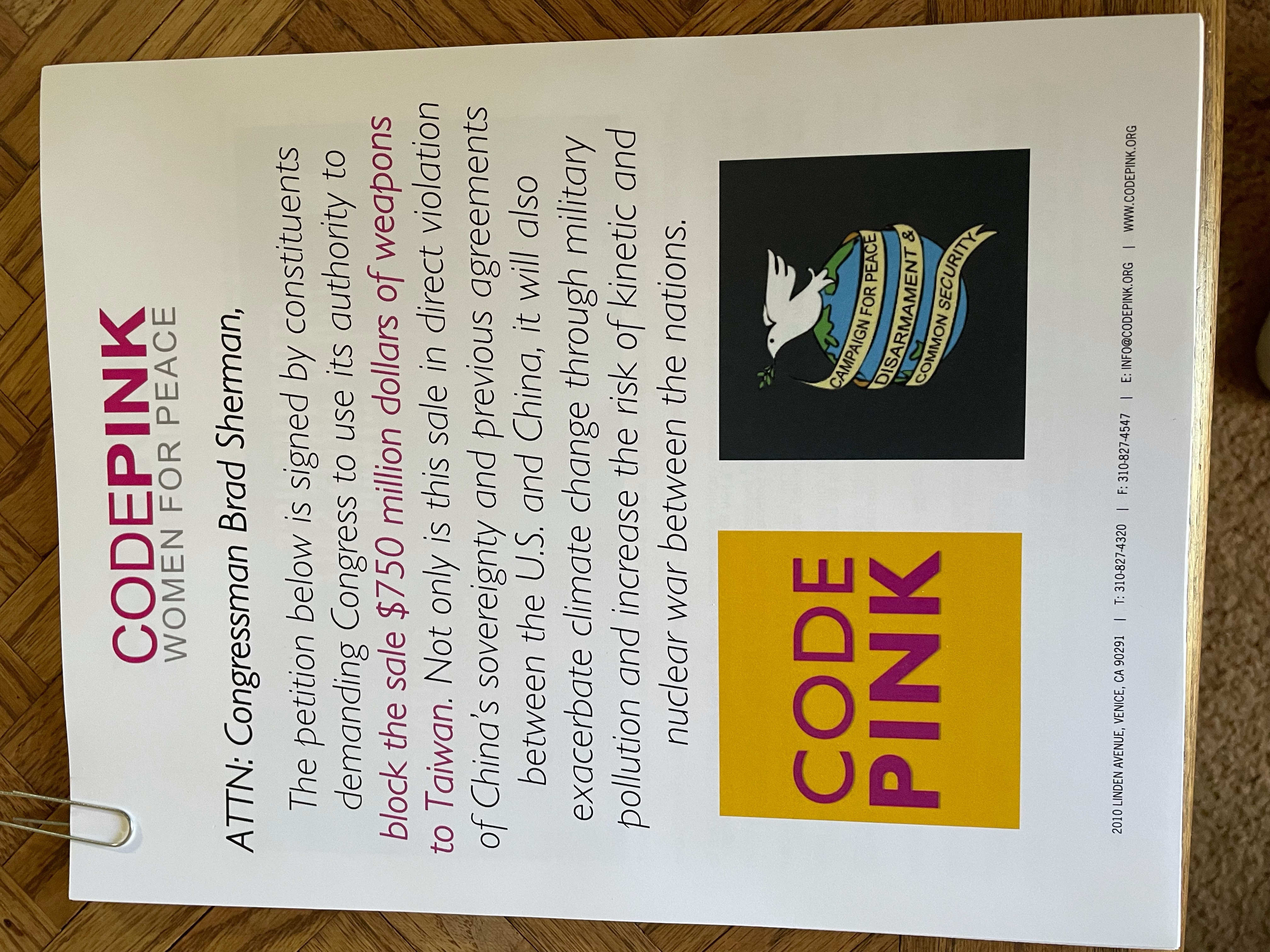 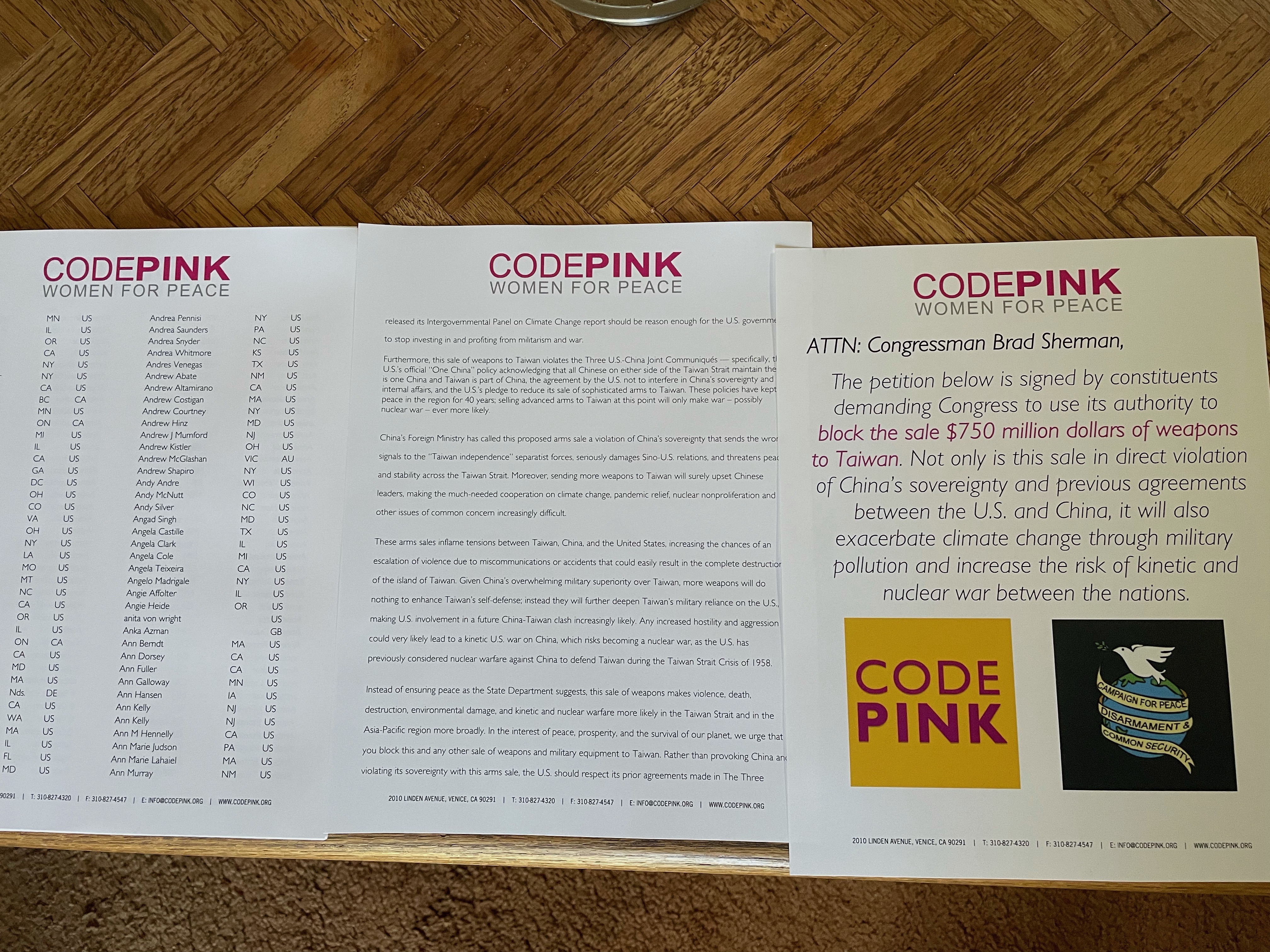