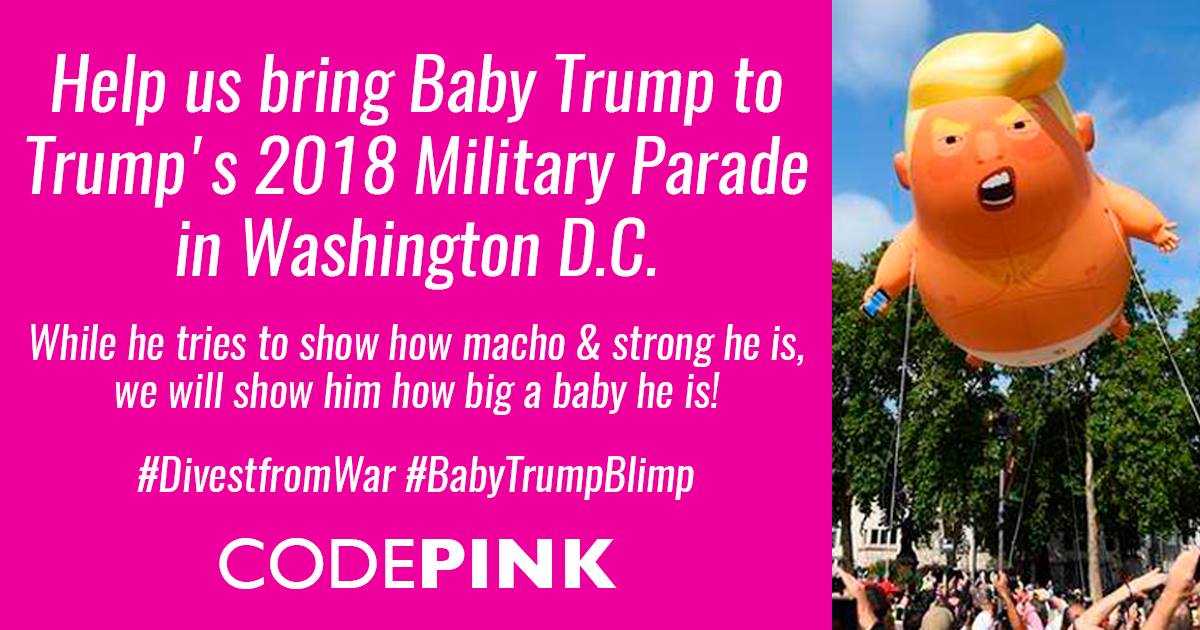 Activists from CODEPINK: Women for Peace are raising funds to bring the popular Baby Trump Blimp to Washington DC. The giant balloon of Donald Trump clad in a diaper and holding a cellphone was featured in London’s mass protest of the president’s visit this past weekend.

The idea for the baby blimp came from comedian Jon Stewart’s depiction of Trump as a “man-baby.” “We took off on this idea of showing Trump as a baby to target his fragile ego,” said British organizer Matt Bonner, who is part of a group that calls themselves the Babysitters. “Trump doesn’t seem to be affected by the moral outrage that comes from his behavior and his policies. You can’t reason with him, but you can ridicule him.”

CODEPINK wants to debut Baby Trump in Washington, DC on November 10th during the military parade proposed by the president. “We think that floating Baby Trump above the nation’s capital will be the perfect way to counter Trump’s war-mongering narcissism,” says CODEPINK cofounder Medea Benjamin. “As he beats the drums of war with guns and missiles, we’ll show him as the infantile, tantrum-thrower that he is.”

Within an hour of launching a GoFundMe page for the endeavor, CODEPINK received over $1,000 in donations. The baby blimp has gained massive popularity and a few different US groups are working to bring the aptly attired balloon to their cities to protest Trump’s policies. With Trump alienating one segment of the population after another, Baby Trump will likely be better received than the president himself.