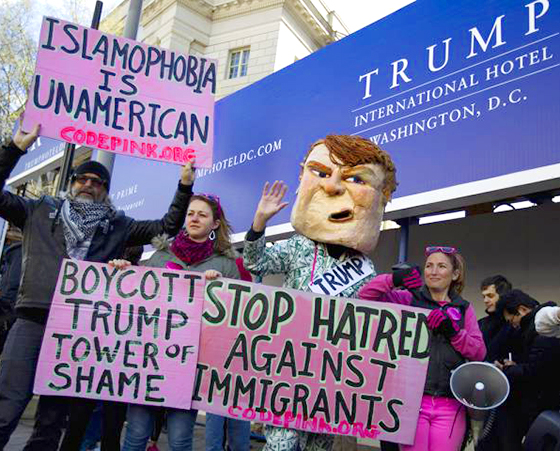 Donald Trump is stocking his cabinet with testosterone-heavy generals, installing the most militarized administration in modern American history. We’ll need a vibrant CODEPINK female-led “Peace Posse” to steer them away from more aggression. Please make a generous year-end contribution today.

If Donald Trump contemplates creating a Muslim registry, we’ll stand side-by-side with our Muslim brothers and sisters to make certain no such abomination prevails.

If Donald Trump wants to roll back diplomatic relations with Cuba, we’ll roll into Havana to openly challenge his aggression with friendship and love.

As we move into a new world of many unknowns, CODEPINK will stand strong for what you believe in: love and respect, diplomacy, political solutions, an end to war and a locally-based peace economy.

Let us rise, love and resist together as we move, courageously, into 2017. Thank you for your support.

PS: Join CODEPINK in Washington D.C.January 19-21 to Rise, Love, and Resist the 2017 Presidential Inauguration! We will be participating in the Peace Ball, Occupy Inauguration, Disrupt J20, the Women's March on Washington, and more. Get your tickets now for the Peace Ball and sign up to be with us as part of the CODEPINK team as we create bridges not wall, diplomacy not war, and love not hate!