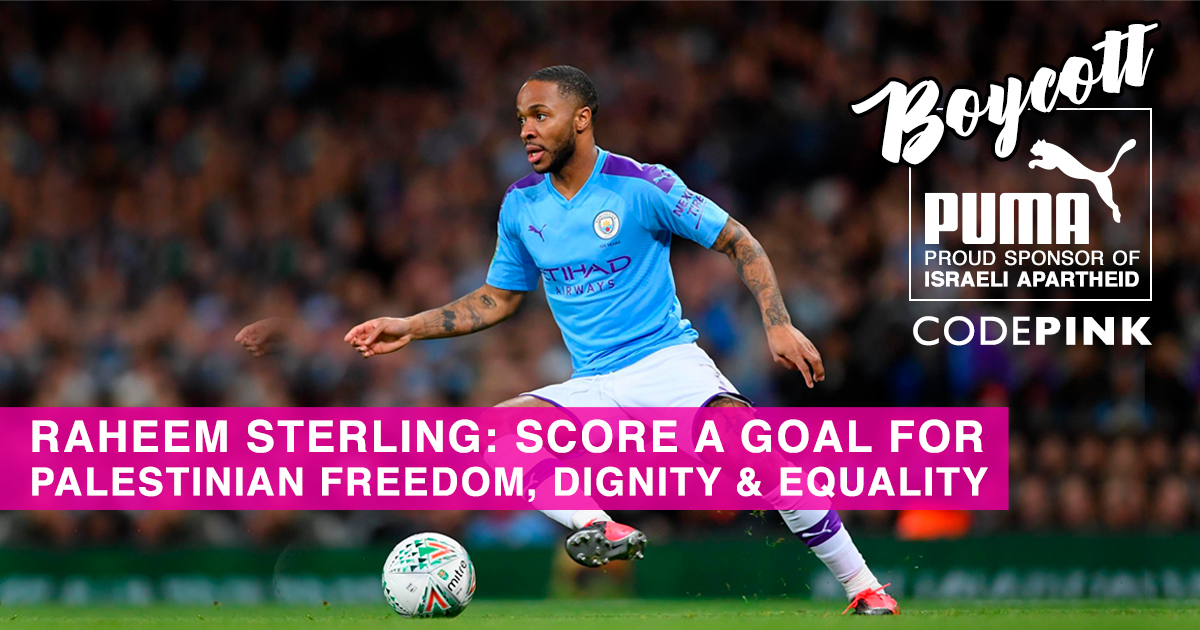 Yesterday, Sunday, May 17, 2020, Israel’s new Netanyahu-Gantz unity government was sworn in after three elections. Addressing the parliament before the vote, Netanyahu, who will remain prime minister for at least the next 18 months, affirmed his plans to annex the West Bank. “It’s time to apply Israeli law and write another glorious chapter in the history of Zionism,” he pronounced, along with the prediction that annexation “won’t distance us from peace.”

WHAT A FARCE! Luckily, we gave up a long time ago on the idea that Israel would willingly end its systems of occupation and apartheid. That’s why we are proud participants in the boycott, divestment, and sanctions movement. Join us in asking superstar soccer player Raheem Sterling not to sign with Puma as long as they host Jewish-only settler team matches. We will deliver the signature by email to Sterling’s management agency.

Puma is the main sponsor of the Israel Football Association, which includes clubs in illegal Jewish-only Israeli settlements. Now, Puma’s offering Sterling, who has taken bold stands against the racism, a whopping 100M Euros to sign with them.

Sterling, who once said, “I don't want the next generation of black players to have to put up with this evil [racial injustice]," is known as an outspoken voice against racism. He also supports using economic pressure to bring about change. That’s why, with your help, we are making sure that he knows about the mass mobilization taking place across the world to boycott Puma until they stop supporting apartheid.

We need Raheem Sterling to be next. Sterling’s contract with Nike ends this month and we need to make sure that he, as someone concerned with racial justice, doesn’t help Puma shield Israel’s crimes. Sign the petition and tweet at Sterling now!