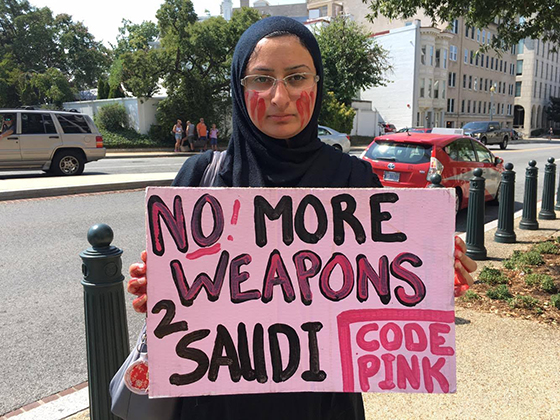 Did you hear the good news that the Obama administration just blocked a new sale of weapons to Saudi Arabia? Concerned over the high rate of civilian casualties caused by the Saudi bombings in Yemen, the White House stopped a Raytheon sale of 16,000 guided munition kits valued at $350 million. This a great step forward — thanks to all your calls and signing of our petitions. We must keep pushing. Tell Congress to stop ALL weapons sales!

Blocking these munition kits is good, but it’s not enough. Other weapons are still being sold to the Saudis. Just last week, the State Department announced plans to sell Chinook cargo helicopters and other equipment worth $3.51 billion! And the US military continues to refuel Saudi aircraft and provide intelligence information for the Yemen attacks. Moreover, a Trump administration might well restore all weapons sales.

That’s why we need Congress to step up. Congress has the right to stop any sales authorized by the State Department, but has refused to exercise its authority. Tell your reps that it’s shameful the US is participating in war crimes the Saudis are committing in Yemen. Tell them to stop all weapons sales to the Saudi regime.

In 2015 the Saudi government became involved with the internal conflict in neighboring Yemen because it was worried that a more pro-Iran faction — the Houthis — would take over the government. Since then, the Saudis have been pounding Yemen with U.S. bombs and logistical support. This 20-month-old war has killed over 10,000 people and sparked a severe humanitarian crisis, including acute food shortages, in the poorest country in the Middle East. UNICEF reports that Yemen’s child malnutrition is at an all-time high, with severe acute malnutrition sapping the lives of over 400,000 children.The tragedy is so profound that every ten minutes, a child in Yemen dies from malnutrition. To save the children, we must stop the war.

P.S. Join us on a unique trip to Honduras and Nicaragua on February 17-26 with the Alliance for Global Justice. We'll look at rural development, women's empowerment and opportunities for solidarity. Check here for more info and to sign up.