An Ambassador did that? 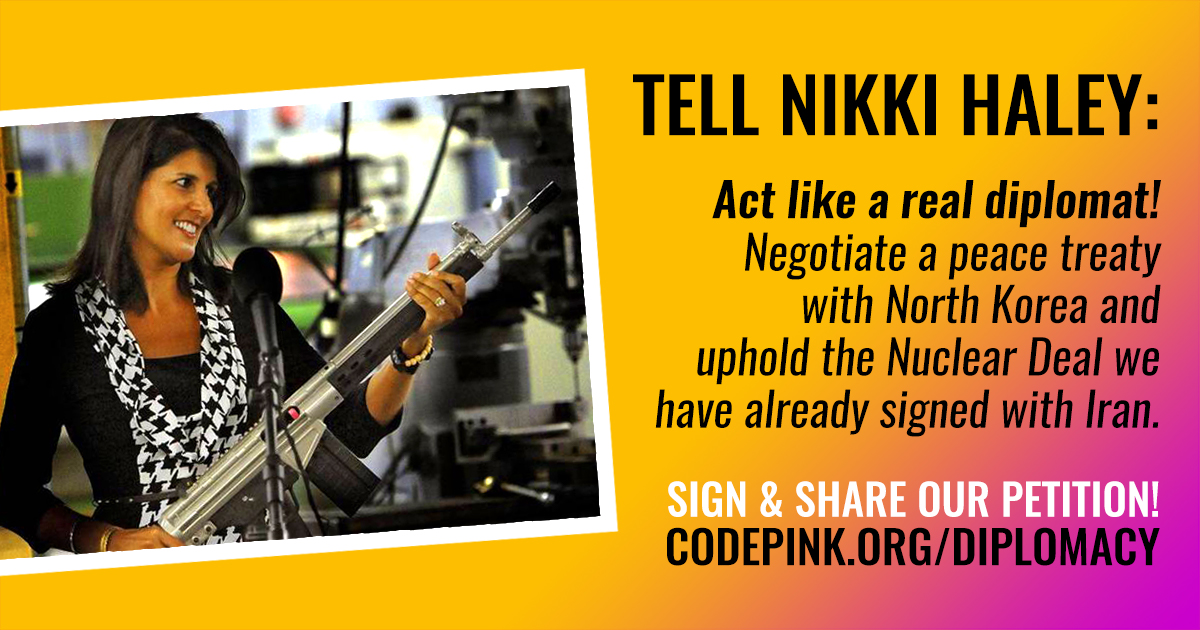 The United Nations was created to stop the scourge of war. Right now, we have the sordid spectacle of the highest level UN meetings taking place with a US President and the US Ambassador to the UN, Nikki Haley, bringing us to the brink of war with North Korea and threatening to disrupt the Iran nuclear deal.

This is obscene and must be stopped. We need you to urgently sign this petition to Ambassador Nikki Haley, telling her to start acting like a diplomat! We will hand-deliver it to the US Mission to the UN tomorrow, just as President Trump will be addressing the UN Assembly.

On Sunday Nikki Haley said on CNN, “We have pretty much exhausted all the things that we can do at the Security Council,” adding that the United States may have to turn the matter over to the Pentagon. She also said, “If North Korea keeps on with this reckless behavior….North Korea will be destroyed.”

A US diplomat should NEVER threaten to destroy another country. And Nikki Haley should be ashamed to pretend the US has exhausted diplomatic efforts when they have bared been tried. The call by China and Russia, now echoed by top advisors to South Korean President Moon, is for the US and South Korea to freeze their provocative military exercises in exchange for North Korea freezing its nuclear and missile tests. This is a negotiating position Nikki Haley should support.

A US diplomat should also NEVER threaten to back away from an agreement like the Iran nuclear deal that makes the world a safer place. We call on Nikki Haley to advocate within the Trump administration for recognition that indeed the Iranians have adhered to the terms of the agreement and the United States should not be looking for excuses to pull out.

At this time in our history where this administration is putting us on a catastrophic path to war with both North Korea and Iran, we, the people, must step up to say NO! Tell Nikki Haley to sit down to negotiate a peace treaty with North Korea and to uphold the agreement we have already signed with Iran.

P.S. Join us to Divest from the War Machine at our Campaign Launch Summit in DC Oct 21-22.