Afghanistan💔: Who’s to Blame and What Next? 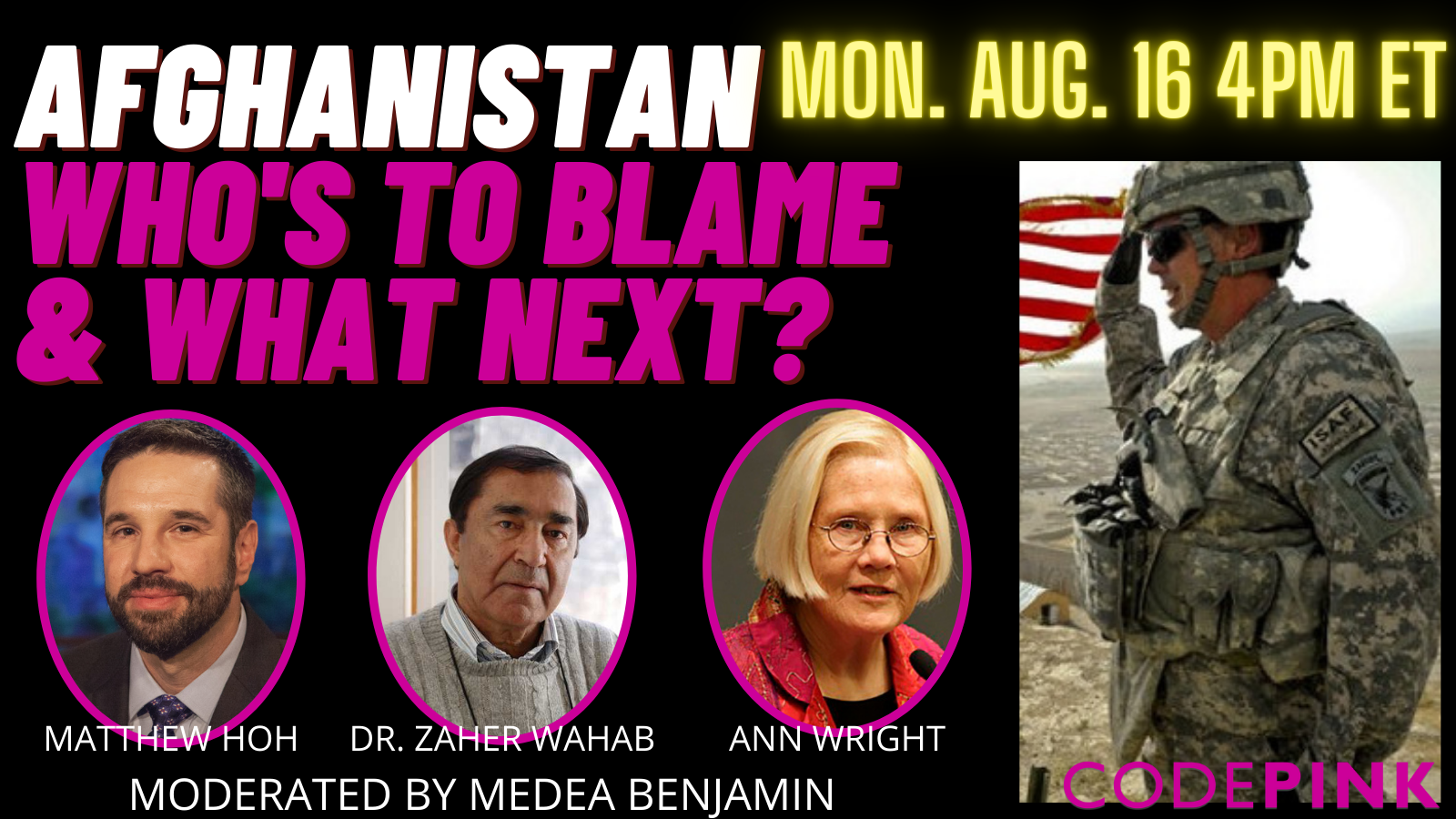 The scenes out of Afghanistan are heartbreaking. It took only a matter of days for the Taliban to take the capital city of Kabul after 20 years of U.S. invasion and occupation. Over the weekend, U.S.-backed ​​President Ashraf Ghani fled the country and the Biden administration sent in 6,000 troops. Among the Taliban fighters who took over the presidential palace was a man who said he spent eight years imprisoned in Guantanamo.

Thousands are fleeing Afghanistan to neighboring countries and others have flooded the Kabul airport, which is now an epicenter of panic, desperation, and sadness.

While CODEPINK supported Biden’s decision to leave Afghanistan, we have been shocked by the disastrous exit—taking U.S. troops out only to bring more back again—and by the appalling lack of intelligence about the strength of the Taliban.

Today at 1pm PT/4 pm ET we will be hosting a discussion on Afghanistan titled Who’s to Blame and What Next? Our panelists will be retired U.S. Army Colonel and CODEPINKer Ann Wright, former U.S. State Department official Matthew Hoh, Dr. Zaher Wahab, of Lewis and Clark University. Ann was on the team that reopened the U.S. Embassy in Kabul in December 2001. Matt resigned in 2001 from his post in Afghanistan with the State Department over the U.S. escalation of the war. Dr. Zaher Wahab, born in Afghanistan, was the first person in his family to attend school and from 2002 to 2006, Dr. Wahab served as senior advisor to the Minister of Higher Education in Afghanistan.

RSVP now to join the webinar Afghanistan: Who’s to Blame and What Next?, today at 1pm PT/4pm ET.

As America grapples with the colossal failure of the U.S. war on terror, with the Afghan people paying a terrible price, we remember that only one member of Congress, Representative Barbara Lee, opposed the U.S. invasion of Afghanistan in 2001. We also remember all our visits to Afghanistan and all the years that we, as CODEPINK, have been calling for an end to the war, while at the same time advocating for the rights of Afghan women.

Now that President Biden has taken the decision to end the U.S. military involvement in the war but carried it out in such a reckless fashion, we still have a tremendous responsibility to the Afghan people.

Sign our petition to President Biden and Secretary of State Blinken calling for the following:

There are many lessons we must learn from this debacle. The U.S. must cease its military interventions around the world and the runaway Pentagon budget must be cut. The U.S. must stop destabilizing the Middle East and Southwest Asia, including lifting sanctions on Iran, stopping weapons export to the regimes of Saudi Arabia, Egypt, Israel, and the UAE, and pulling our troops out of Iraq and Syria.

CODEPINK was formed in 2002 in opposition to the wars in Iraq and Afghanistan. We have never stopped working to end militarism and we won’t stop until peace and justice are achieved. Join us today for a discussion on Afghanistan and sign our petition to Biden and Blinken.