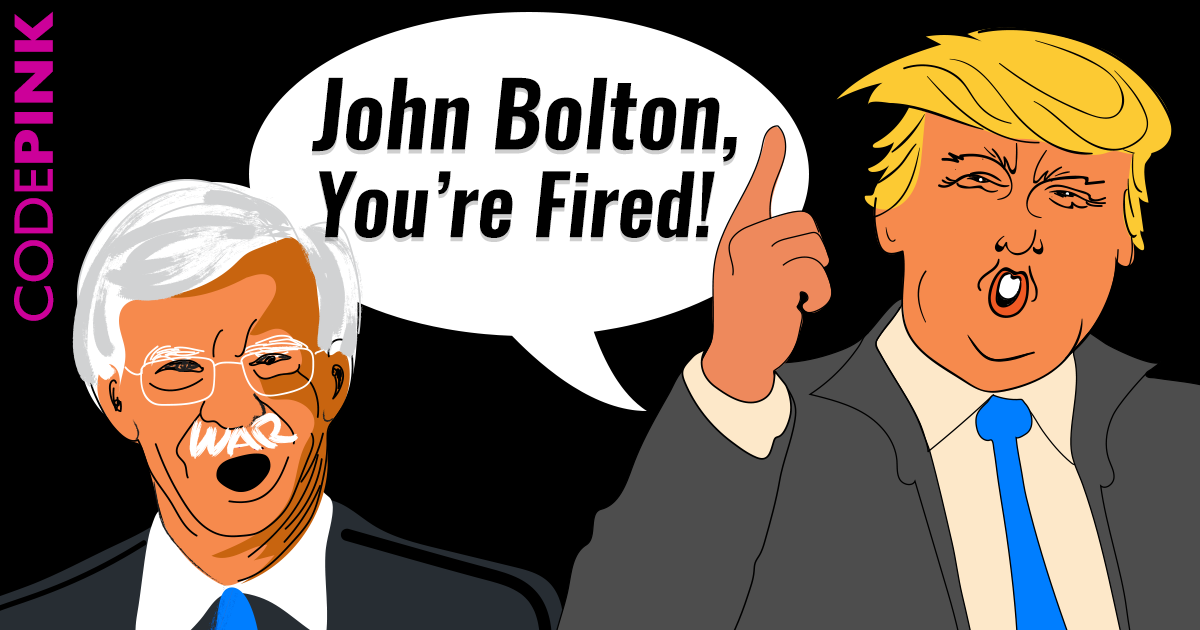 What: Celebration of John Bolton’s Firing

Washington D.C.: In celebration of today’s announcement that notorious warmonger, John Bolton, has been fired from his position as National Security Advisor to the president, CODEPINK will be hosting a celebration in front of the White House.

Bolton has consistently and openly incited war with Iran for decades. His campaign of “maximum pressure” against Iran has put us on the brink of yet another disastrous war in the Middle East and is punishing 80 million Iranians with brutal sanctions. He has undermined peace negotiations with North Korea and, most recently, with the Taliban in Afghanistan. He played a key role in the attempted coup on Venezuela earlier this year and has been manufacturing consent for further militarist efforts in Latin America by creating the moniker, “Troika of Tyranny,” and wielding it in a protracted propaganda campaign against his next targets: Cuba, Venezuela, and Nicaragua.

Throughout all of this, he has worked to undermine the authority of all international organizations that might hold him accountable for his actions, including the United Nations and the International Criminal Court.

CODEPINK has been fighting for John Bolton’s firing since he was first appointed to the position on account of his warmongering behavior throughout his public life and thusly sees this firing as a victory for peace and for the entire international community.

“We celebrate the firing of John Bolton because his tenure in the President’s Cabinet has served exclusively to undermine peace processes at every opportunity,” says CODEPINK cofounder Medea Benjamin. “Now, we must push Trump to replace him with a peacemaker and start the hard work of making peace around the world.”