#DemDebates: Moderators must ask this question! 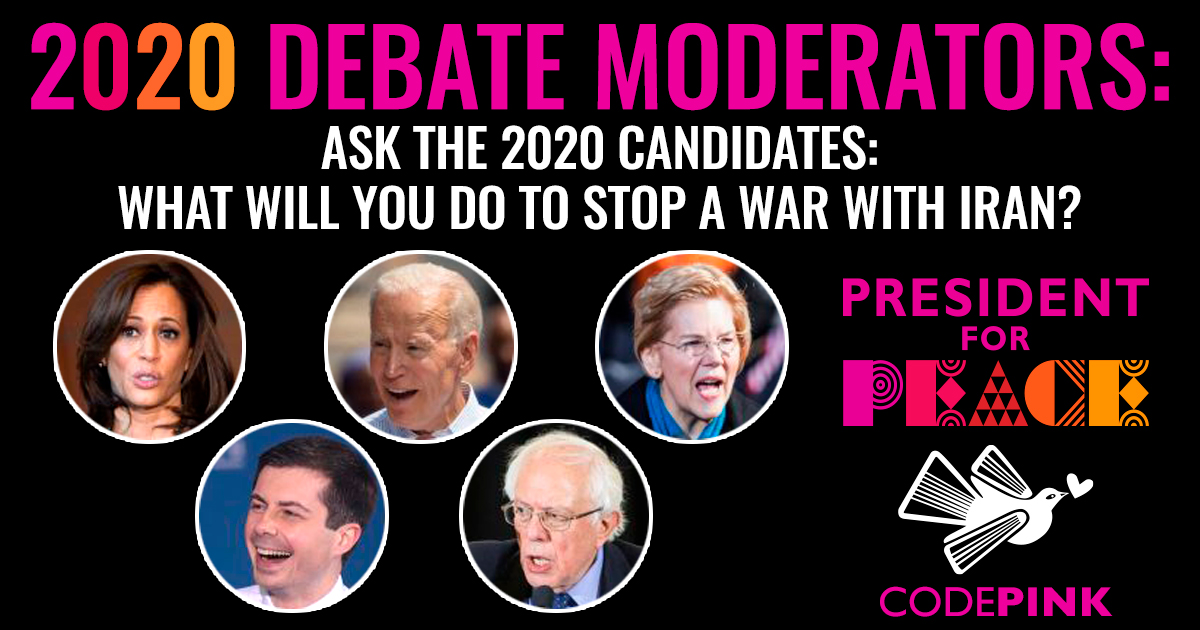 This week, democratic candidates will take the stage in the first debate of the 2020 presidential campaign. With headlines blasting about more sanctions and military strikes on Iran, we want to make sure the debate moderators really drill the candidates on U.S. foreign policy with Iran so we can understand each candidate’s stance. Urge the debate moderators — Rachel Maddow of MSNBC, Chuck Todd of Meet the Press, Savannah Guthrie of the Today Show, Lester Holt of NBC Nightly News, and Jose Diaz-Balartemail of Noticias Telemundo — to ask the presidential candidates how they would reverse course and stop the U.S. from going to war with Iran.

The majority of candidates have already announced that, if elected, they will rejoin the Iran nuclear deal, however, few have also said how they would restart diplomatic talks with Iran. Given that the Trump administration has obliterated all avenues of communication with Iran by imposing killer sanctions as of yesterday — including sanctioning Foreign Minister Javad Zarif, Iran’s top diplomat who negotiated the historic nuclear deal — we need more specific information about how each of the candidates would walk us and Iran back from the brink of war. Here’s what we need the debate moderators to ask: How would you resolve U.S. conflicts with Iran and undo the damage that Trump, Bolton, and Pompeo wrecked? Would you immediately lift the economic sanctions that Trump re-imposed ever since he unilaterally withdrew from the nuclear deal?

U.S. sanctions and Trump’s maximum pressure policy have crushed any opportunity for new negotiations with Iran and put the U.S. on the verge of another catastrophic war in the Middle East. While Washington warmongers gloat about successes they’ve achieved in sanctioning Iran’s regime, in reality everyday Iranians are the ones who are hit the hardest. Unemployment has skyrocketed and the price of foods like vegetables and poultry have doubled.

The American people do not have an appetite for another costly war. That is why we need a President for peace to change the current U.S. foreign policy. Contact Rachel Maddow, Chuck Todd, Savannah Guthrie, Lester Holt, and Jose Diaz-Balartemail and tell them to ask how presidential hopefuls would prevent a war with Iran.

P.S. The debates will be Wednesday, June 26 and Thursday, June 27 at 9pm EST on NBC, MSNBC and Telemundo. Use our President for Peace social media tools (graphics, sample tweets and more) as you watch and make sure to use the #PresidentForPeace hashtag so we can follow and retweet you.