Join CODEPINK and Muslim Delegates and Allies on Zoom for an evening with journalist Tim Shorrock and others critiquing Biden Intelligence nominee Avril Haines’ troubling policy prescriptions for North Korea. Following the critique and discussion of US foreign policy, you are encouraged to join our Capitol Hill calling and email party.

Join us in urging Senators to VOTE NO on HAINES for Director of National Intelligence. Demand the Senate and incoming Biden administration commit to an independent review of the US drone warfare program, for which Haines established the “legal framework” and signed off on strikes. 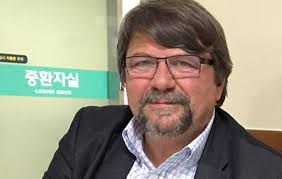 Tim is a journalist raised in Japan and South Korea, who recently authored Old Obama hands on Korea policy could pose new problems for peace, in which he critiques Biden Intelligence nominee Avril Haines’ North Korea policy recommendations calling for ramped up sanctions and contingency plans for regime change in North Korea.

In The Nation’s “We Need to Move from a Wartime Mentality to a Peacetime Mentality”, Shorrock writes about the call by Women Cross the DMZ and Korea Peace Now for the US to declare a formal end to the Korean War.

Author of Spies for Hire: The Secret World of Intelligence Outsourcing, Tim Shorrock frequently writes for The Nation magazine, as well as Mother Jones, The Progressive, The Daily Beast, and The New York Times.