Join CODEPINK as we plan our All Eyes on BlackRock Protest!

While CODEPINK has an ongoing campaign urging BlackRock to divest from all weapon manufacturers, this year, we also ask that BlackRock support human rights for this shareholder season. 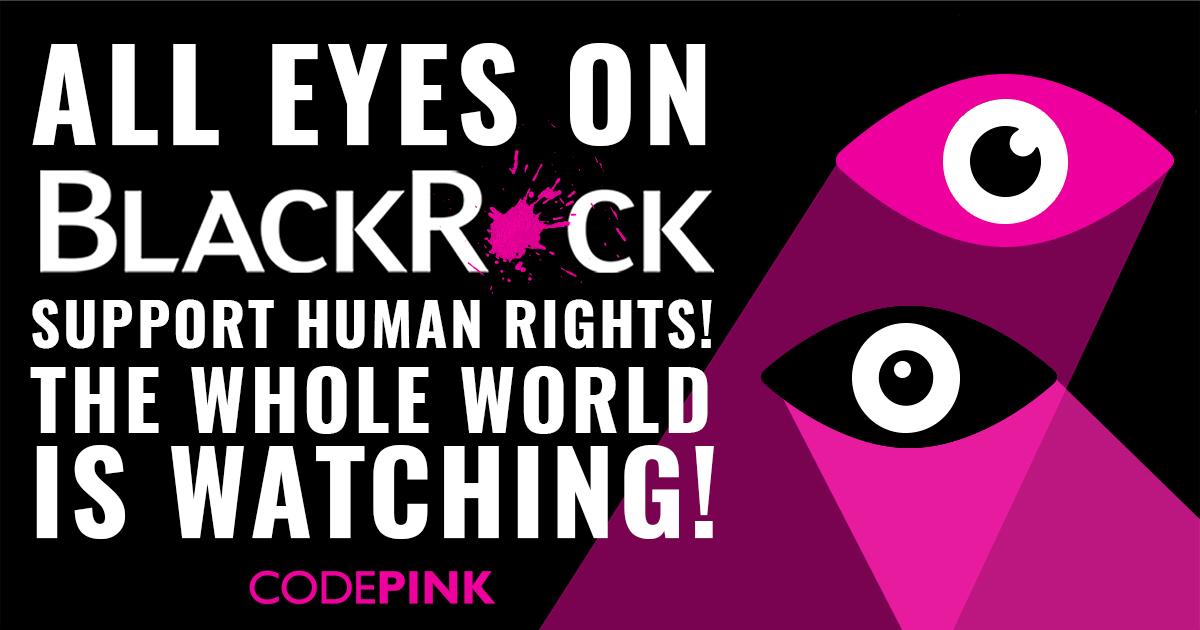 BlackRock is the world’s largest asset manager, controlling more than $5 trillion in assets globally. BlackRock released a statement indicating that it would like companies to implement and disclose their human rights processes to identify, manage, and prevent adverse human rights impacts. But yet BlackRock is one of the largest shareholders of Tasers manufacturer Axon enterprise and has $7.25 billion invested in Boeing, $3.3 billion in General Dynamics, $5.6 billion in Lockheed Martin, $3.4 billion in Northrop Grumman, and $4 billion in Raytheon. Weapons made by these companies are being used in Palestine, Syria, Iraq, Yemen, and other places around the world where the US continues to be involved in active conflicts. As you can see, even though BlackRock said it would like companies to implement human rights processes, they continue to profit from war. BlackRock even has an iShares fund that exclusively benefits from weapons of war.

At this planning meeting for the upcoming May 25th protest of the BlackRock Shareholders meeting, we’ll update everyone on some working plans including introducing our speakers and musicians, as well as thinking through run-of-day logistics, and roles for the day of the protest.

To get engaged with our divest campaign and learn more about what we are doing in NY reach out to [email protected] Additionally, sign the BlackRock petition here.