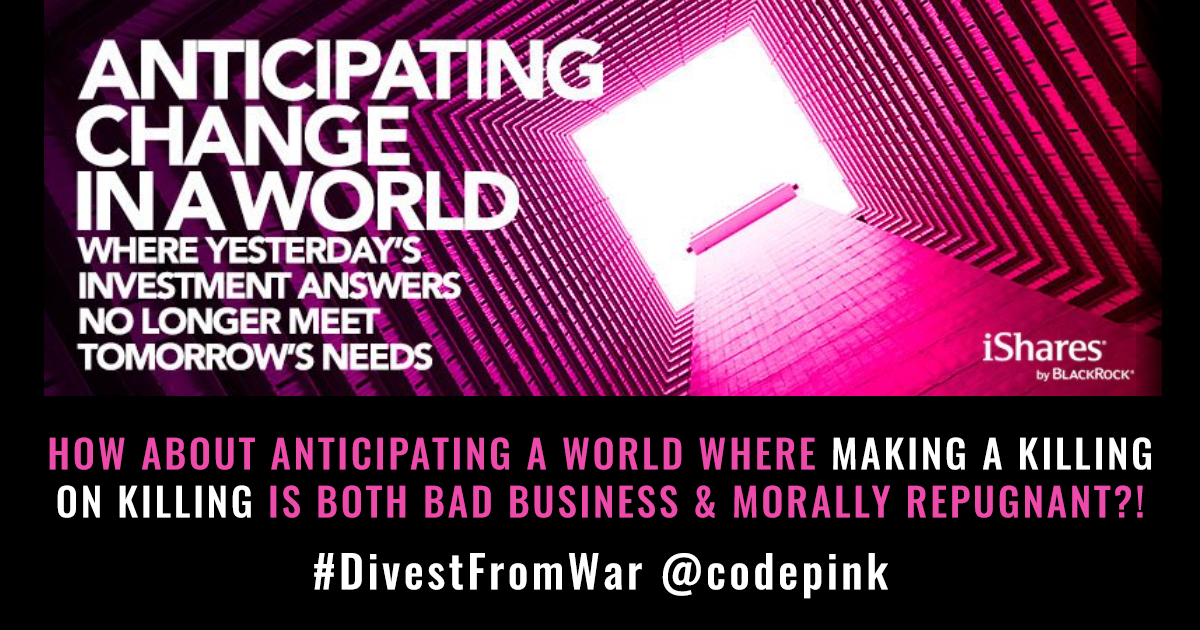 BlackRock is the largest asset manager in the world. Controlling more than $8 trillion in assets under management (AUM), BlackRock is the world’s largest shadow bank. In addition, they own the iShares franchise of investment funds and other proprietary investment vehicles.

BlackRock is one of the largest shareholders of Tasers manufacturer Axon Enterprise. Tasers used by law enforcement killed thousands of Americans, according to a 2019 Reuters reported. Black Americans make up 32 percent of those who died, while Whites make up 29 percent. In 2017, Washington County Sheriff’s fired their Tasers over 15 times, killing 58-year-old African-American Eurie Martin. The Taser’s manufacturer, Axon Enterprise, stated that “its weapons are not risk-free but are safer than batons, fists, tackles, and impact munitions.” However, Axon takes no responsibility for the killings and blames the police for inadequate training. Axon’s largest shareholder is BlackRock, the world’s largest investor in weapons of war and climate chaos.

iShares is one of the fastest-growing investment vehicles globally; during the 1st Quarter 2018 shareholder update, BlackRock highlighted that the iShares franchise is how their business is booming. One of these iShares funds is exclusively dedicated to “defense spending” – in other words, a fund that is solely profiting off of weapons of war. The defense fund includes investments in Lockheed Martin, Boeing, Raytheon, General Dynamics, Northrop Grumman.

BlackRock’s investments are making a killing on killing. Weapons manufacturers, military contractors, and civilian firearms manufacturers are investments that fuel war, death, and destruction in our streets and around the world. Investments in weapons companies, both military and civilian, run counter to BlackRock’s statements about holding companies accountable to be good corporate citizens. For example, the top five military contractors in the U.S. – Lockheed Martin, Boeing, Raytheon, General Dynamics, and Northrop Grumman – all have numerous counts of waste and abuse of federal tax dollars. These companies have been accused of groundwater contamination, misconduct, labor violations, and overinflated pricing, resulting in overbilling defense contracts issued by the federal government.

Corporate accountability must extend to those who hold the shares of these companies. In a public statement, BlackRock CEO Larry Fink announced that he would start holding the companies they invest in accountable for being responsible corporate citizens. Unfortunately, Mr. Fink’s statement for accountability rings hollow while BlackRock continues to profit off of the most morally corrupt companies in the world. To highlight how much money BlackRock has invested in weapons manufacturers, let’s look at their investments in the top 5. They have $5.7 billion invested in Boeing, $2 billion in General Dynamics; $4.6 billion in Lockheed Martin; $2.6 billion in Northrop Grumman; and $6 billion in Raytheon.

The weapons made by these companies are used in Palestine, Syria, Iraq, Afghanistan, Yemen, among other places where the U.S. continues to be involved in active conflicts. These weapons are responsible for the deaths of countless civilians during wars that are devastating communities and breeding further instability and retaliation. In 2012, the FBI released a report indicating that U.S. military intervention abroad was responsible for the rise in terrorism worldwide and at home. Far from making us safer, the products made and sold by these companies create an endless cycle of violence that disrupts peace and security at home and around the world while lining the pockets of a privileged few far from the devastation.

BlackRock has $4.6 billion invested in Lockheed Martin. In numerous Israeli assaults on the Gaza Strip, Lockheed Martin jets, helicopters, and missiles played significant roles. The majority of those killed were innocent civilians. A study done by the Defense for Children International into the 2014 assault on Gaza determined that at least 225 of the 550 children who died in the 50-day assault died from Israeli warplane attacks, including by Lockheed Martin F-16 fighter jets.

Its iShares “defense spending” includes significant investments in Israel’s largest publicly traded weapons company, Elbit Systems. Elbit drones are used on the Gaza Strip to attack innocent Palestinians. The United Nations have investigated the attacks and concluded them as possible war crimes or crimes against humanity. In addition, Elbit is a major supplier to the Israeli military and provides surveillance technology for Israel’s apartheid wall.

BlackRock maintains significant stakes in weapons companies such as General Dynamics, a military contractor that has also taken a government contract to provide “social services” to migrant children held at U.S. detention camps. Learn more about the connection between BlackRock, General Dynamics, and migrant detention.

BlackRock recognizes the impacts and dangers of civilian firearms by creating two gun-free funds and voting for the Sturm Ruger shareholder proposal. In 2020, the company released a series of weapons-free funds; however, it has a long way to go to be completely free of weapons.