Tuesday, May 11 Capitol Calling Party: US Withdraw from Afghanistan: Make It Real 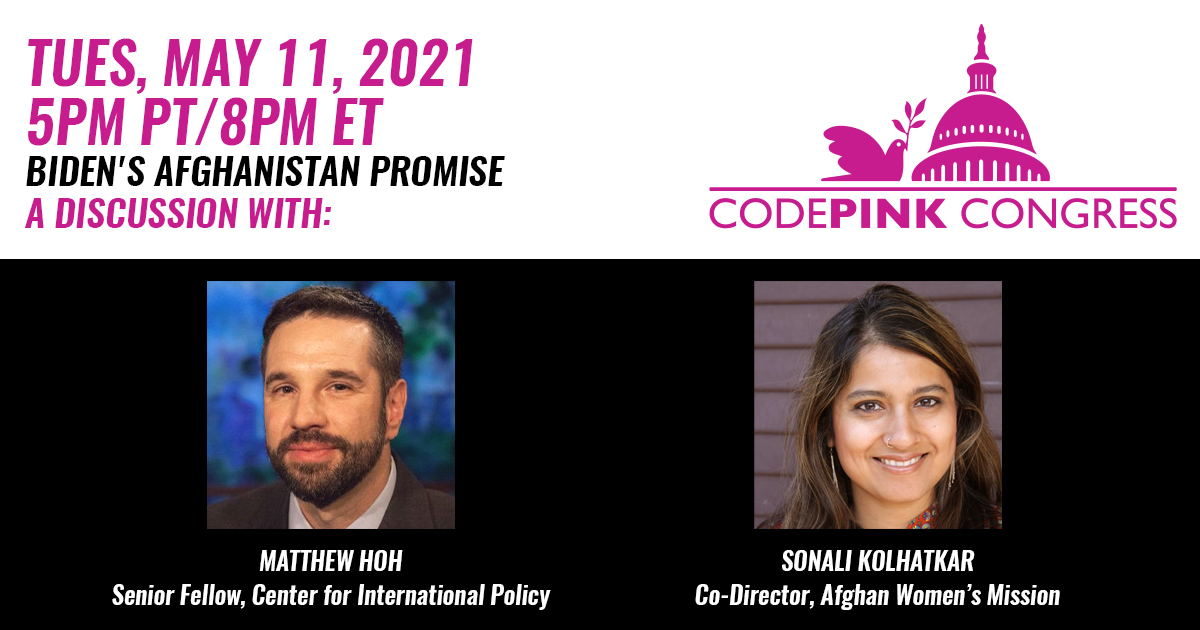 On Tuesday, May 11, CODEPINK Congress will focus on Afghanistan: Will President Biden keep his campaign promise to end America's decades-long involvement in Afghanistan?

We will be joined by two guests:

Sonali Kolhatkar: Journalist, activist, and artist, Sonali is the founder, host, and executive producer of the popular program Rising Up With Sonali which airs on KPFK and KPFA and Free Speech TV. She is also the founding co-director of the Afghan Women’s Mission, a US-based organization that funds the work of the Afghan women’s group RAWA, and author of Bleeding Afghanistan: Washington, Warlords, and the Propaganda of Silence.

Matthew Hoh: Matthew has nearly 12 years of experience with America’s wars overseas with the US Marine Corps, Department of Defense, and State Department. He has been a senior fellow with the Center For International Policy since 2010. In 2009, Matthew resigned in protest from his post in Afghanistan with the State Department over the American escalation of the war. His writings have appeared in publications such as the Defense News, the Guardian, the Wall Street Journal, and the Washington Post. He has been a guest on hundreds of radio and television networks.

We will be taking action to show the Biden administration our support for a complete withdrawal, including contractors and special operations, as well as an end to airstrikes. We will also show our opposition to Democrats in Congress who are opposed to the withdrawal. Please RSVP for the Zoom information!